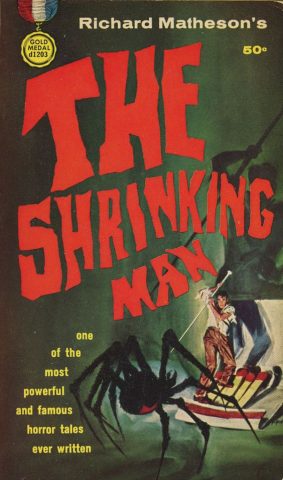 The Shrinking Man by Richard Matheson – Art by Mitchell Hooks

When I was traveling around Scotland in April I stopped in a bookstore in Elgin looking for Stephen King’s Skeleton Crew. I wanted to read “The Mist” and “The Jaunt” to the kids; we were having fun with scary stories before bed, and I figured Skeleton Crew was the 1980s motherlode. Sadly, they didn’t have it. Or maybe it was…lucky? Instead I picked up Richard Matheson’s 1956 novel The Shrinking Man. I hesitated to say lucky because after reading The Shrinking Man I didn’t feel so much fortunate as I did horrified and viscerally emasculated. It was kinda like my experiences watching Kubrick‘s  The Shining after becoming a father or reading Simenon‘s Dirty Snow leading up to a nervous breakdown—harrowing. But I guess that is what you want out of a good horror novel, right?

So, where to begin? I guess the first thing about this book that strikes me while writing this is it’s structure. The overall idea of the book is that Scott Carey is shrinking 1/7th of an inch every day, or an inch a week. The beginning of the book finds Scott at one inch tall waiting to disappear into nothingness in the next seven days. Brilliant setup, no? And you go through the travails of what it means to be an inch tall trapped in the basement of a house trying to forage for crumbs and water while avoiding the resident daddy longlegs. You are also orientated to a totally different world of scale via distances, measurements, and re-thinking the uses of everyday utensils, and more. In many ways the book immediately denatures everything you know, and Scott Carey is a stranger in a world designed for another scale. This is all intriguing, and while a great setup, if this was the meat of the book it would could old quickly, in fact I would say the descriptions of his daily struggles with existing over the last week becomes the least horrific and compelling part of the novel. The real horror lies in the episodic humiliations and emasculations along the way.

A Novel of Inches

During Carey’s arduous struggle to simply exist in an over-sized world, he flashes back to various incidents along the way to his current size (there’s never really a satisfying scientific explanation as to why he is shrinking, but that’s all right by me). You learn about the effects of the shrinking through the lens of his marriage, his daughter, his fury, and his frustrations. In almost every chapter there is an event that triggers a memory of a particular time during over the previous months of shrinking that is is measured in inches. The first flashback is 68″, the next 64″, 49″, 42″, 35″, etc. Each flashback captures recounts episode brought on by his slow disappearance that frames the psychological horror of his predicament. I won’t go through them all, but there are a few I can’t unread.

This flashback focuses on Scott and his wife Lou’s changing sexual relationship. The entire flashback is the brutal realization that shrinking has taken on serious toll on any sense of his manhood. The way in which masculinity is tied up with size, voice, and sexual prowess comes in to sharp, horrific focus in this flashback. While Scott is internally tortured by the desire he no longer has the confidence to act on, his wife increasingly becomes the site of of his masculine insecurities:

“Why don’t you go to sleep?” Lou asked quietly.
His lips pressed together. He felt a cold shudder move down his back.
“No,” he said.
Imagination again? Or was his voice as frail as it sounded to him, as devoid of masculinity. He stared somberly at the V-neck of her robe, at the flesh-walled valley between her breasts, and his fingers twitched with his repressed desire to touch her.
“Are you tired?” she asked.
“No.” It sounded too harsh. “A little,” he amended.
“Why don’t you finish up the ice cream?” she asked, after a pause.
He closed his eyes with a sigh. Imagination it might be, but that didn’t prevent him from feeling like a boy, indecisive, withdrawn, much as though he’d conceived the ridiculous notion that he could somehow arouse the physical desire of this full-grown woman.

Phrases like “devoid of masculinity” and “arouse physical desire” that haunt Carey are the real horror of the book. His shrinking is not so much about running from cats or battling spiders, though there’s that, it’s more about slowly watching yourself become increasingly irrelevant and vestigial:

It wasn’t just physical desire; it was so much more. It was the dread of tomorrows without her. It was the horror of his plight, which no words could capture.

This was worse, far worse.

This for me was what made this book so crazy, the psychological torment of watching your relationships deteriorate while you shrink. Unlike the sudden death or illness, this was a drawn out, constant readjustment to an alternative reality that constantly alienates you from what you even knew the day or week before. Matheson gets to the very core of psychological horror in this book, much like Kubrick does in The Shining. The deterioration of the relationship with those close to your slowly over time. “Problems with the old sperm bank upstairs!”

It’s already bad enough, after that flashback episode I am reeling, but Matheson is just getting started. The next episode was doubly crazy. Not only does it feature Carey being picked up by an overweight, drunken middle-aged man who preys on what he believes to be a 12 year old boy, but he happens on a parkway (I’m assuming the Southern State Parkway) in the town on Long Island where I grew up: beautiful Baldwin. The tire of his car blew out and he found himself stranded on the side of a highway when he is picked up by an almost falstaffian figure who was not only drunk but also a first-rate pervert trying to seduce what he thinks is a young boy. And, what is crazy, is he goes into a vitriolic attack on women:

“Ugly they are,” stated the heavy man in the dark, wrinkled suit. “Ugly with an ugliness that worries the fringes of phenomena.” His eyes moved, peering out at Scott over banks of crow-lined fat. “Do you intend to marry, dear boy?” he asked.
If I could laugh at anything these days, Scott thought, I could laugh at that.
“No,” he said. “Say, could I get off at-”
“A wise, a noble decision,” said the heavy man. “One of virtue, of seemliness. Women.” He stared wide-eyed through the windshield. “Append them to cancer. They destroy as secretly, as effectively, as speak truth, O prophet, as hideously.” The man looked at him. “Eh, boy?” he said, chuckling, belching, hiccupping.
“Mister, I get off here.”
“Take you to Freeport, my boy,” said the man. “To Freeport away! Land of jollities and casual obliterations. Stronghold of suburban ax-grindings.” The man looked directly at Scott. “You like girls, my boy?”

It’s an even more horrific look at a lost man, the horrific predator that haunts the imaginations of children and parents alike. And his virulent misogyny is prelude to his lascivious lust for Scott. All of this just beneath the well-kept lawns of 1950s suburban Long Island. A world of repression and one in which the figure of a lost masculinity seems to be the root of all horror.

That said, at the end of this truly disturbing episode after Carey escapes his attacker, Matheson doesn’t moralize:

Abruptly the man pulled over to the side of the highway.
“Leave me, leave me, then,” he said bitterly. “You’re no different from the rest, no, not at all.”
Scott shoved open the door with trembling hands.
“Good night, sweet prince,” said the heavy man, fumbling for Scott’s hand. “Good night and dreams of plenteous goodness bless thy repose.” A wheezy hiccup jarred his curtain speech. “I go on, empty, empty… empty. Will you kiss me once? For good-by, for-”
But Scott was already out of the car and running, headlong toward the service station they had just passed. The man turned his heavy head and watched youth racing away from him.

This strange moment of pathos for the man watching youth race away as he goes on empty humanizes this monster for a moment. It’s a jarring end to the sequence, and a good indicator of how off-balance Matheson keeps you the entire novel

Equally as terrible is the scene at 35″ when Scott in a fit of rage and frustration with his inability to communicate with his family leaves the house only to be picked on and beat up by a group of teenage boys who at first think he’s a kid and then realizing he’s “that shrinking freak” double down on their menacing. It reminded me of the scenes featuring Henry Bowers in Stephen King’s It or Eyeball from Stand By Me. Just flat out mean kids who want to inflict pain and suffering on others: “As flies to wanton boys are we to the gods/They kill us for their sport.” I won’t go much deeper here, but you get the idea.

By this point you probably have a fairly good sense of how the horror is operating in this novel, and I felt the same way reading it. But come 21″ the dark psychological insanity of Carey plight does not let up. At this stage he is a freak, not much bigger than an oversized Star Wars Figure. He he has to hide in the basement while his wife goes to work (they’re broke as he lost his job months ago) so the babysitter can mind their daughter without being spooked by the walking, talking man doll. And it’s during this episode I realized this book was downright NSFW. Given Scott’s deep sexual frustrations and constant rejections and assaults he begins fantasizing about the teenage babysitter through the basement window. Really?! What fresh hell is this? I was thinking to myself this kind of mainstream 1950s science fiction could not have been written today, or at least visualized. And to that point, there was recently (2005) a comic series made of the book that was fairly faithful to the novel but omitted the scenes with the babysitter.

I don’t think i should go on even though I could. I’ve probably said too much already. But the ending is completely unexpected and strangely redemptive. I am not entirely sure what to do with the book. It was truly compelling, and you can see why King said no author has been more influential on his work than Matheson. In fact, seems to me both King’s The Shining and Thinner (to name just two) are deeply indebted to this novel.  That said, there is a kind of realistic/psychological horror to this novel that I have encountered in few other places, Kubrick’s The Shining and Dirty Snow being the two I can think of. I haven’t read as widely as many though, so I’m sure there are many others, I’m just not sure I’m psychically up to it! Sweet Jesus.