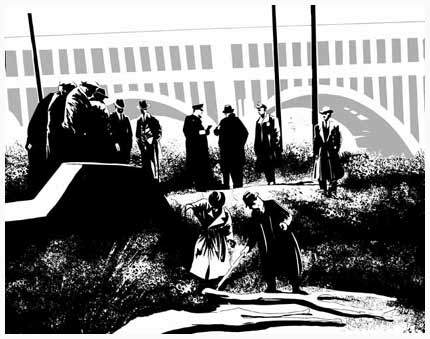 I’ve been a bit quiet on my blog about the True Crime course Paul Bond and I are teaching, which is a shame because it is a total blast. Luckily Paul has been doing most of the heavy lifting on his blog, and teaching along side him is a real treat. This week we looked at Brian Michael Bendis and Mark Andreyko‘s graphic novel Torso (2001), a gripping, illustrated account of Cleveland’s torso murders during the 1930s. The text is a documentary account of Eliot Ness’s attempt to clean-up the corruption in Cleveland, using the fictional frame of two hardboiled detectives. The work is in the vein of Alan Moore’s From Hell (1999), but far more compelling given its brilliant noir minimalism and integration of documentary resources such as newspaper articles, photographs, etc. It also subtly weaves in various personal accounts of the barbaric murders occurring regularly over a four or  five year span in Cleveland’s lakeside shantytown—a neighborhood of forgotten, itinerant souls that were a product of the Great Depression.

One of the coolest things about the last nine weeks  has been witnessing how the Truecrimers have documented much of their preparation for leading the course discussions using the True Crime Course Wiki. Each week an alternating group of three students collaborate to frame the discussion they’ll be leading about the texts, and that is all laid out in the respective wiki article for each day’s reading(s). Bridget Johnson, Melissa Westfall, and Morghan Smith did a solid job this week on the Torso article as well as the articles on H.L. Mencken’s “More and Better Psychopaths” and Joseph Mitchell’s “Execution.”  They’re effectively using this space to aggregate information about the authors, historical context, summarize the text itself,  frame broader thematic issues, ask relevant questions, and link to various resources on the web.

What I really love about the wiki is that over time the format of the presntation gets fine-tuned and further honed as a result of it being a public, open space. They can (and do) view each others work, take note of how it’s being organized, and generally build better resources on top of what’s come before. Truth be told, the presentations and the use of the wiki was rough the first few weeks, but as of week nine the students are doing a far better job running the class, collecting valuable resources, and sharing what they’ve learned each and every class. None of it’s perfect yet, nor will it ever be, but it’s remarkable how much more comfortable they are with taking control of the class, and their learning, in nine short weeks.

This entry was posted in True Crime and tagged Torso, truecrime. Bookmark the permalink.