Weird Science: Saving for the Future 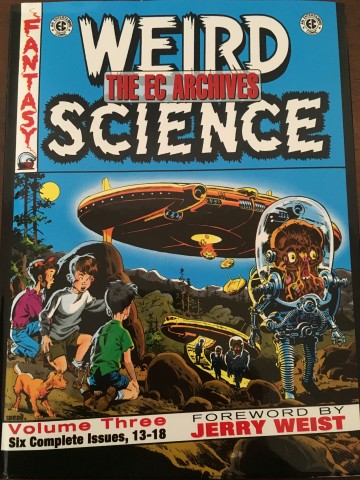 When I was in L.A. a couple of weeks ago I took advantage of a couple of awesome book and comic shops (in particular Meltdown and Wacko) to pickup some goodies for the family (as well as a few for myself). I already blogged about my Tales from the Crypt score in L.A. eight months ago, and this time I kept with the EC Comics theme, but picked up a new title: Weird Science. According to Wikipedia, this title was nowhere near as successful as Tales from The Crypt, but was a labor of love financed by the success of latter. I picked up Volume 3 of the EC Archives project, and I hope to get my hands on volumes 1 and 2 soon.

Anyway, I basically get these for myself with the excuse they are for my kids. That said, Miles and Tess have started to get into them. Weird Science was still in the wrapper until Miles asked if he could open it and read it. Absolutely! He devours them pretty quick, and he’s actually a bit more of a deciphering reader than me. I love them all, he’s more particular—but also he’s usually right. So last night as he was going to bed he told me I should avoid the first story (“A Weighty Decision”) which “was boring” and jump right to second one, “the plague story.” I was intrigued, so I headed downstairs and read the plague story, which was officially titled “Saving for the Future.” He was right, it was pretty awesome. 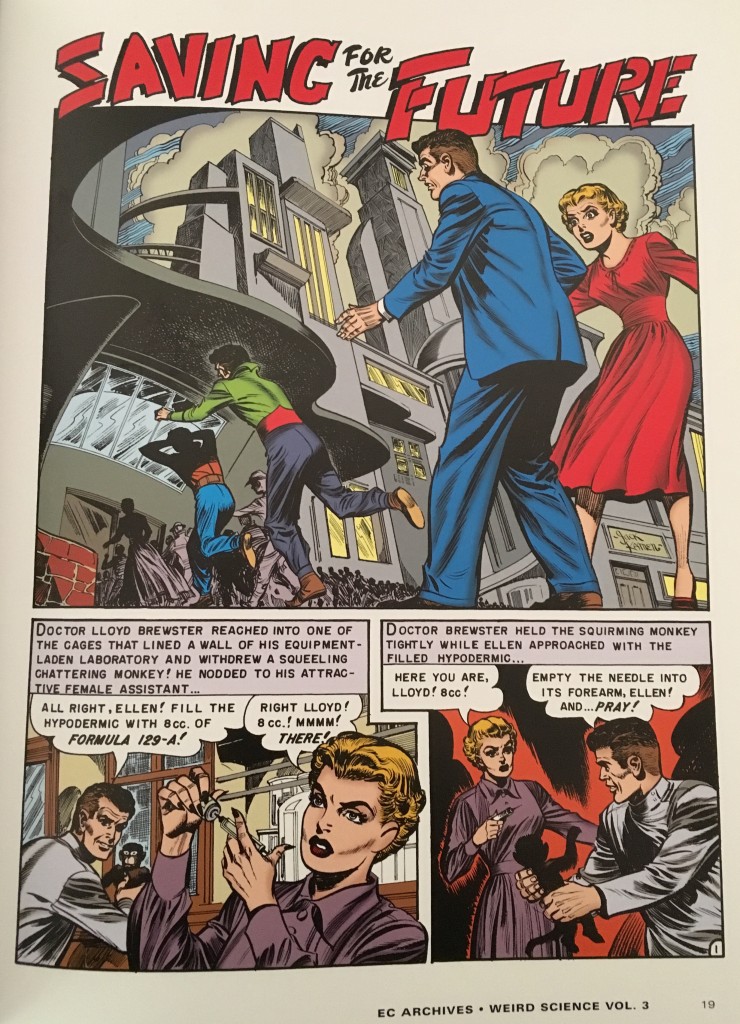 In fact, it’s a story that once you’ve read it, you realize you’ve heard it before in one way or another. Kind of like a collective narrative we all share in some form post-1492. Interestingly enough, it is written roughly 500 years after the discovery of the new world, and projects 500 years into the future. Anyway, here is a quick summary:

A scientist discovers a serum that can suspend and preserve life indefinitely. At the same time, he and his assistant are madly in love but his wife won’t give him a divorce. So, they decide to suspend themselves for 500 years so they can start over in the future. What’s more, they figure out that if they invest $10 with compound interest, they will be rich when they wake up. [There is a fun aside encouraging kids to figure out compound interest works.] 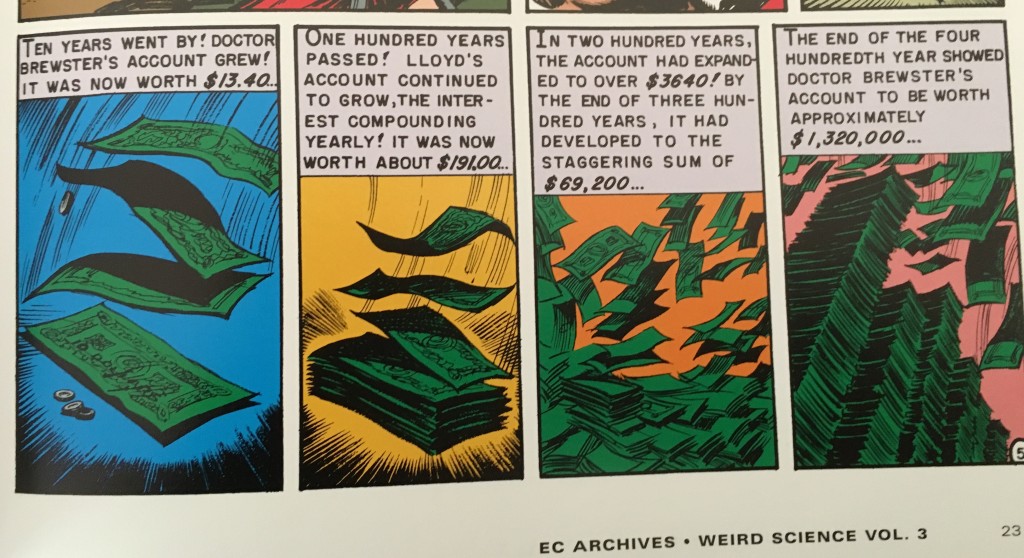 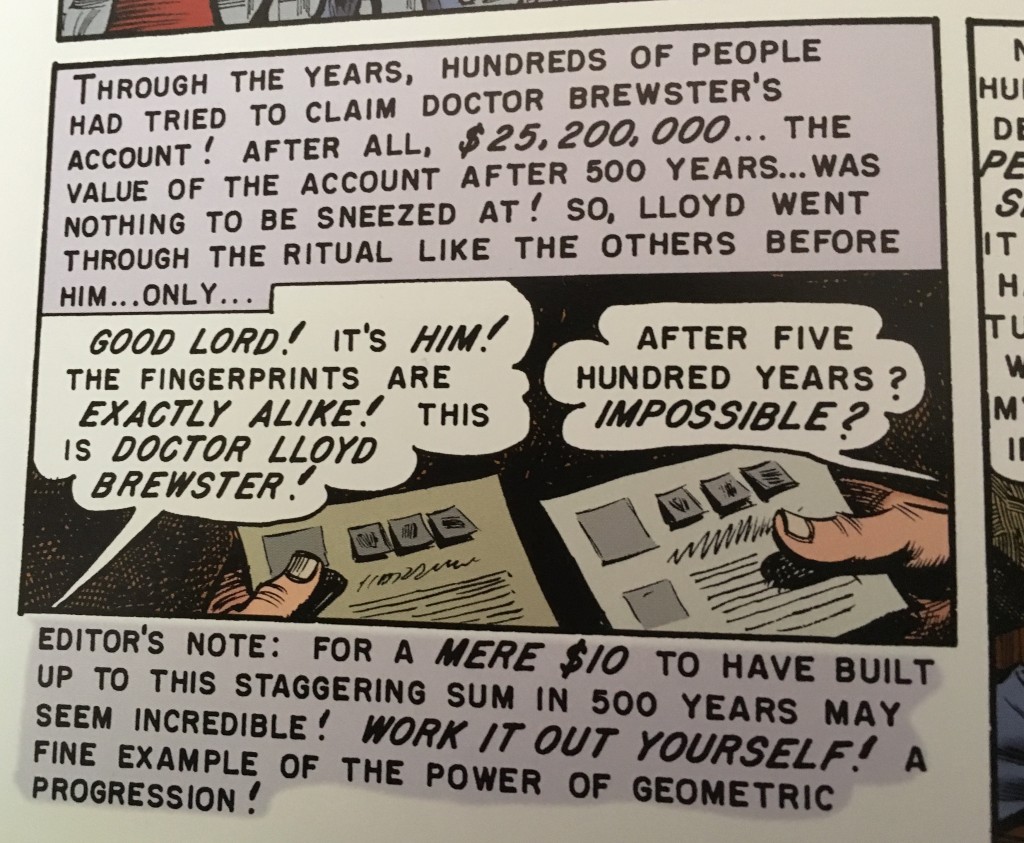 They wake up 500 years later, and they retrieve their money from the bank and are rich! [There should probably be another financial lesson here about inflation and the cost of living increases.]  But, all of a sudden a plague begins devastating the future, and our two heroes use their wealth to constantly move to avoid it. Nonetheless it continues to follow them. Turns out the plague is the common cold—which was eradicated 300 years earlier—that they reintroduced to a population that no longer had immunity to. 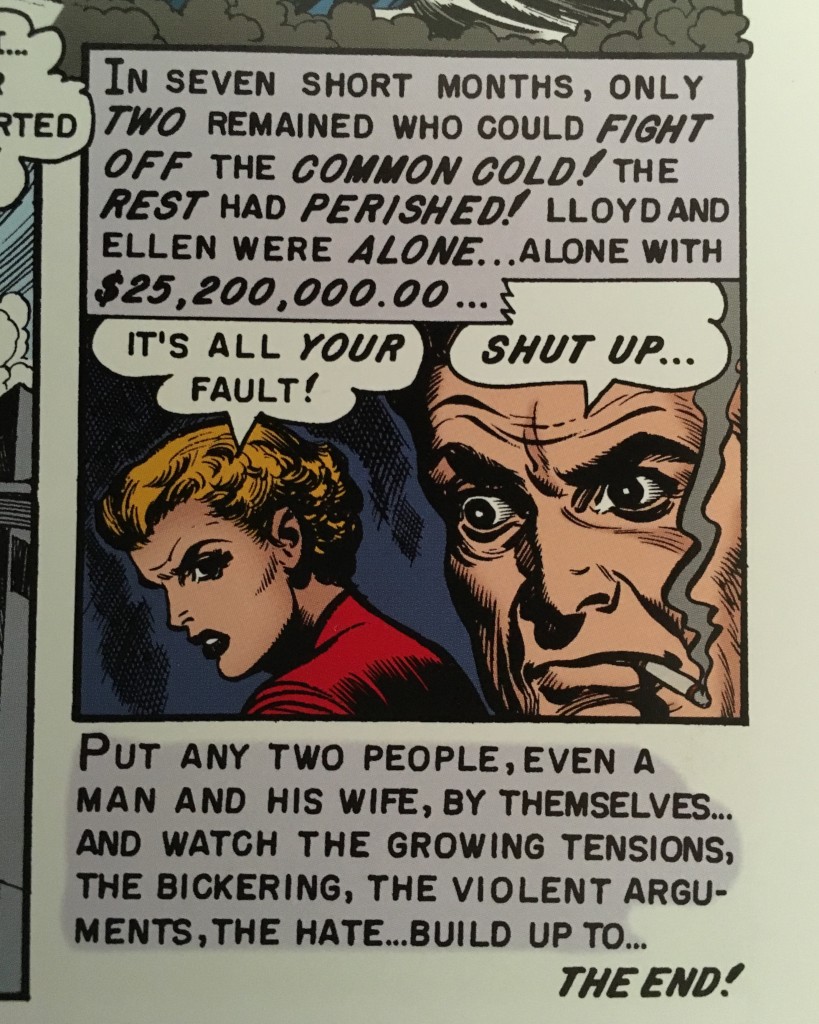 So good! A solid ending with a great twist. And I love the final panel of the comic which has our two heroes, the last people on earth, turning on each other. I tend to read this as a colonizing narrative of greed and exploitation wherein the colonizers get their due. The idea of common illnesses becoming devastating plagues harkens back to the European pox brought to the “New World” and its devastating effects. Some deep stuff in this one, good work Miles!

This entry was posted in fun and tagged EC Comics, Weird Science. Bookmark the permalink.