While in L.A. last week, my good friend Mikhail and I made a stop at the comic shop Meltdown. It’s a great store. They have everything from comics to graphic novels to figurines to video games—and the folks who work there are both knowledgable and helpful. I’m a big fan. I could spend hours on end there, but we only had a little bit of time, and luckily I knew exactly what I wanted. And they had it: 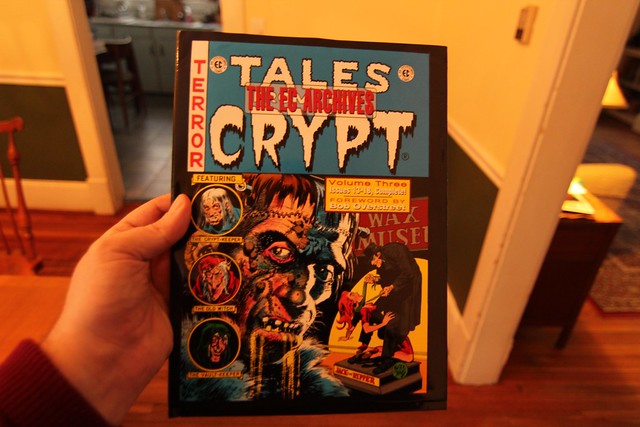 The Ec Archives: Tales from the Crypt, Volume 3

I’ve been wanting to get my hands on the EC Comics archives of Tales from the Crypt because I’m toying with the idea of doing a future ds106 course around these 1950s comics. I think it would be a blast, not to mention I love to look at them. More importantly though, I needed a gift for each of my kids before heading home from L.A., and I figured Miles was ready for some of the most awesome horror comics ever created. So, I picked up volume 3. 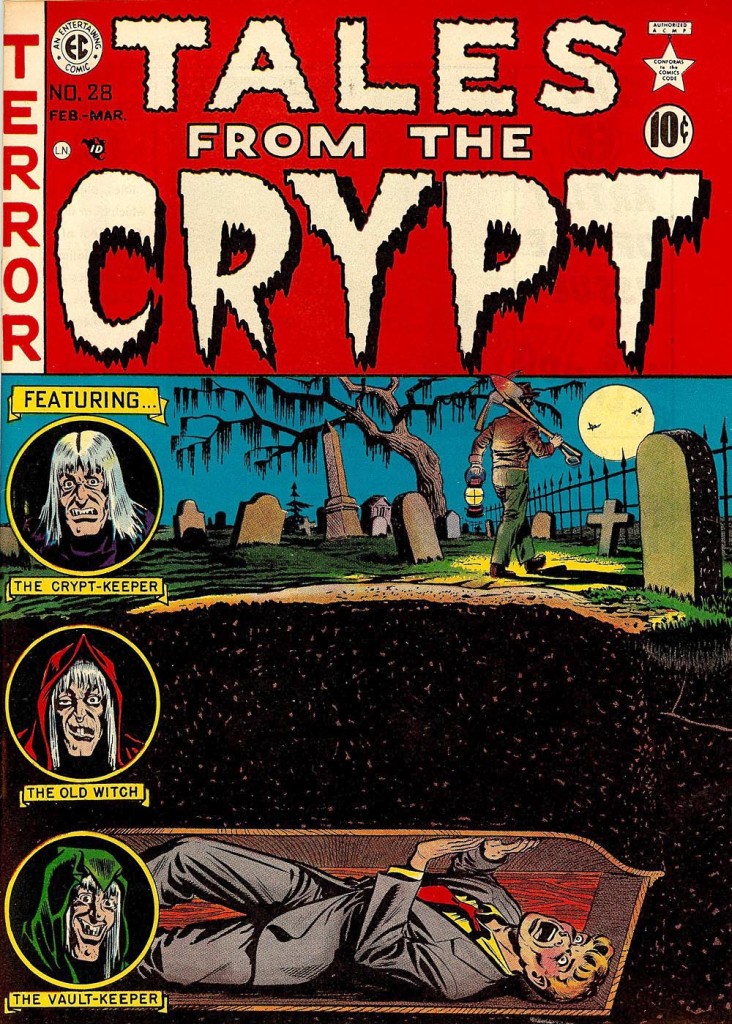 When I started reading the first story of this volume to Tess and Miles, “Grounds…for Horror!” I was struck my how insane it was. Let me explain. The first story is about an abusive step-father who locks his disobedient son, Artie, in a dark closet in spite of his mother’s protest. The step-father is a butcher by trade, and their apartment adjoins with his shop. Can you see it coming yet? Artie’s mother overhears her son talking to someone named Hozir, whom she takes for an imaginary friend he created to help him deal with the abuse. Well, Hozir is not imaginary, he’s just invisible. And as the step-father ramps up his attacks on the child, Hozir promises retribution. And, he delivers on that promise in a fairly spectacular way:

Miles and Tess were like WTF, daddy? And I was like, that is awesome! A comic book for kids that truly disturbs. Who said things were normal during the 50s? In fact, the 1990s re-working of Tales from the Crypt as an animated cartoon called Tales from the Cryptkeeper is just depressing in comparison. Not only does the art suck, but the stories are completely toothless. Look at this adapted version of “Grounds for Horror” and tell me I’m wrong.

I just ordered the DVDs for the first two seasons of the late 80s, early 90s HBO series Tales from the Crypt. While I saw a few episodes at the time they came out, I don’t remember too much. But after reading up on it, seems they had a decent number of good actors and directors working on that series. My yardstick for all interpretations of this aesthetic is still George Romero’s Creepshow (1982), so we’ll see how that goes. If for no other reason, it will be useful given my kids are constantly asking me to tell them scary stories before they go to bed, and I’m running out of ideas.