I have to document some of what we have been working on for WordPress Multiregion (WPMR) given I’ll need to reference some of these commands and scripts in the future. One of the issues that can occur with our WPMR setups is that the database on the primary site can get out of sync with the secondary site, which means posts or comments to the primary database are not copied over cleanly to the secondary database. This is an issue for obvious reasons, but it can be hard to identify given both sites will still be running cleanly (the database does not break), it’s just that the secondary site will not have any of the latest content after the sync was broken.

This is an issue I have run into sporadically while playing with WPMR, and over the last month we have come up with a clean way to both identify when the databases aren’t replicating cleanly as well as a command to run that puts them back in sync. 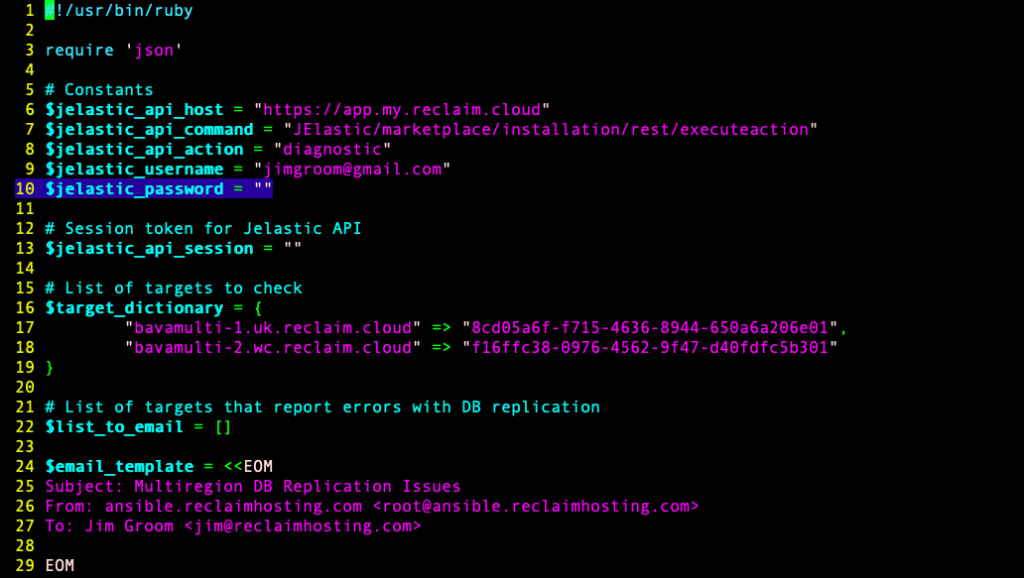 The first bit I’ll share is a script Chris Blankenship wrote that is executed regularly using a cron job to ensure the JSON output from each WordPress instance of a WPMR setup match for latest posts or comments (and we may even want to add pages to that).

This lives on Reclaim’s Ansible server at /root/cron_scripts/multiregion_db_replication/multiregion_db_replication_check-bava.rb and if I add my Reclaim Cloud username and password as well as our Jelastic API key I will be notified both via email whenever the two databases are out of sync. You can also integrate with Slack notifications, but I changed those emails given they’re particular to Reclaim Hosting’s Slack, much like the Reclaim Cloud credentials, Jelastic API key, etc.

So, now that we know when the sync is not working we need to fix it. And do that you need to run the following command on the secondary WordPress instance as root for the environment. To switch to root you need this command:

After that, run the database recovery command below in screen given it can take 15-20 minutes:

Once in screen, make sure the donor-ip value is the IP address of the primary WordPress instance in the multiregion setup. and then run the database recovery script:

For example, the command for my setup looks like this:

After that, the script will re-sync the databases.

What follows might be considered a wishlist. What would make sense based on this workflow is that any time the sync breaks the following three things happen:

And with that the multi-region setup would not always need to route pools in failover order, this will happen only if there is an issue with database syncing, or any of the server instances goes down.