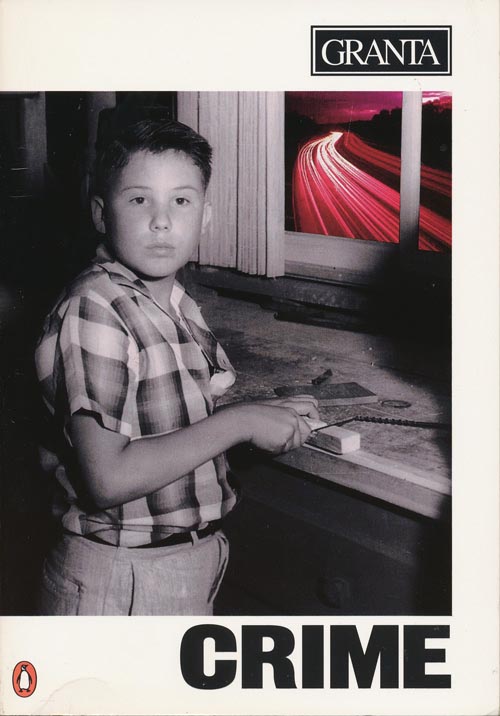 I can remember the exact moment I heard about James Ellroy for the first time. It was the Fall of 1994 and I was working at UCLA’s Audio Visual Services scheduling AV needs for the campus community when my co-worker Steve Roberts (who had amazing taste for both film and literature) started talking to me about this crazy dude who writes novels inspired by his own mother’s murder. What struck me most from that conversation was the image of the writer as a 10 year old on the cover of that special Crime-themed issue of Granta Magazine (#46) that was taken by the press at the exact moment he was being informed by the police his mother had been murdered. It’s an image that has been burned onto my memory ever since. The fact that this guy had an image of himself as a boy at the very moment he learned about his mom’s death forever frozen in time fascinated me at first, then it started to haunt me a bit, and then it got me interested in his novels—something I am still thankful to Steve Roberts for two decades later. 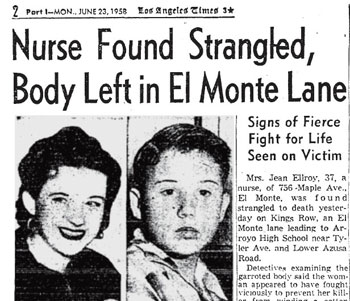 Despite the “death of the author” we’ve been living with for decades now, it’s still not all that easy to divorce a writer’s biography from their work. And in the case of Ellroy it is next to impossible, in fact his life story has all but defined his work. As Paul Bond noted in a recent post on Ellroy:

Ellroy had written a half-dozen crime/detective novels before The Black Dahlia. They were good, but not outstanding. He knew as he was writing those early works that he needed to write the Dahlia, but that he also needed to develop as a writer in order to do it justice. He said, in My Dark Places, “I knew I could link Jean and Betty and strike 24-karat gold.” When he was ready, he wrote it and it made him a star.

And as Bond also noted, the Freudian implications here are limitless. As an adolescent Ellroy transferred his mother’s murder onto the highly publicized and grisly murder of  Elizbeth Short, also known as The Black Dahlia, which occurred a decade earlier in 1947. And like the Dahlia case, Jean Ellroy‘s murder in 1958 remains unsolved to this day.    And that lays the rich, complicated historical context for the novel The Black Dahlia which is in many ways provides a framework of “true crime” within which Ellroy’s masterfully written fiction about the underbelly of 1940s Los Angeles can wreak havoc.

And that is how we opened last night’s class (which unfortunately was not recorded), discussing the the dedication of the novel, which goes like this:

Much of what I prefaced the dedication with above is what we discussed for the first half of class. Ellroy’s biography, his mother’s murder and the projection of all of this onto the Black Dahlia case.  From there we started discussing the Prologue to the novel, which in many ways is just as interesting. Ellroy chooses to frame his novel against the historical backdrop of the Zoot Suit Riots of 1943—a choice that immediately highlights the racial violence of 1940s Los Angeles and the two-tiered system of law and order as it applied to racial and ethnic minorities and the white power structure. While escaping the chaos of the Zoot Suit Riot in the Prologue, the novel’s protagonists (Bucky Bliechert and Lee Blanchard) collar petty thief Tomas Dos Santos, whose most recent victim died of a heart attack:

Tomas snatched a purse off a hairbag on 6th and Alvarado, she keeled of a heart attack and croaked, Tomas dropped the purse, ran like hell. Left a big fat juicy set of prints on the purse….he’s dead meat. Manslaughter Two’s a gas chamber jolt for spics. Hepcat here’s about six weeks away from the big adios. (7)

Immediately the deeply structural prejudices of 1940s L.A. are laid bare and only reinforced throughout the novel. The Black Dahlia presents a world of blatant racism and grisly violence—both institutional and individual—against Latinos, African-Americans, Women, Children, and any other under represented contingent. It’s a world dominated by the white, male power structure—-and while the first third of the novel both champions and reinforces this with the boxing match between our two protagonists—the victims of this power structure is everywhere apparent. The chasm between nationalism and racism that opens this book with the Zoot Suit Riots is very hard to suture shut with a boxing match. The characters represent a one vision of this narrative world, but from the very start it’s impossible for it to exist in isolation. As Bucky Beichert remarks in the Prologue as he steps out into the riotous streets:

I was terrified because the good guys were really the bad guys.

Sailors were kicking in windows all over Evergreen; marines in dress blues were systematically smashing street lights, giving themselves more and more darkness to work in. Eschewing inter-service rivalry, soldiers and jarheads overturned cars parked in front of a bodega while navy youths in skivvies and white bell-bottoms truncheoned the shit out of an outnumbered bunch of zooters on the sidewalk next door. (5-6)

For me the heart of this book is immediately framed in the prologue: a violent, racist, cruel society that is a dream vision of predation and obsession wherein telling the good guys from the bad is the stuff of fairy tells. All of which hits harder when you think of how the moment of World War II, and those soldiers who served, were canonized in the 1990s by Tom Brokaw as the Greatest Generation—a  nostalgic vision of a time when America knew the good guys from the bad: :”a simpler time.”  A truism if you were part of the white power structure that everywhere rules the world of The Black Dahlia.

When Ellroy is at his best, and that is definitely the case in The Black Dahlia, L.A. Confidential, White Jazz, and American Tabloid he viciously tears off the safe, popular facade of U.S. History during the 40s, 50s, and 60s and injects a raw vision of events filled with thugs, thieves, and murderers—an alternative history of the submerged power structure of U.S. culture that can only be told in retrospect—a literary vision that reaches its height in The Cold Six Thousand. And as it turns out very similar to another contemporary masterpiece of historical fiction written in the 1980s by Cormac McCarthy: Blood Meridian. It would be a bit of a toss-up to say whose vision of the past was more insane, but if I were to be brutally honest I think McCarthy might edge him out a bit in the violence department with Blood Meridian—but Ellroy is definitely more fun 🙂

If you’re still with me at this point I apologize this has being so long-winded, but I’m trying to summarize last night’s class as best I can given the recording was botched. Nonetheless, I’ll try and wrap up now, though I really do love writing about Ellroy. Towards the end of the discussion we started talking about the main characters and their telltale scars. Lee Blanchard’s inability to forgive himself for the abduction, and assumed murder, of his nine year old sister 20 years earlier. Bucky Beichert’s struggle with his “kraut” father (a liability at the time) as well as his guilt over sending two of his Japanese-American friends off to Manzanar to get on the LAPD. Kay Lake’s emotional and physical scars born of her relationship with  crime boss Bobby Dewitt. And to tie the three together, all the respective scars of the novels main characters bring them together around a shared, twisted obsession with the grisly murder of Elizabeth Short—what becomes the collective nightmare fantasy of all of them, and what pushes the narrative into a benzedrine-inspired hallucination of ghosts, demons, and corpses. But more on that tomorrow.

3 Responses to Hardboiled Week 14: James Ellroy, The Black Dahlia, and Other Twisted Obsessions