If you’re looking for a good, theme-based double feature I have a treat for you, and if you have access to streaming Netflix in the U.S. (or can get your hands on a proxy) then you can get some instant gratification to boot. Anto and I have been digging on 1970s French crime films, in particular Jean-Pierre Melville’s 1972 film Un Flic which literally translates as “A Cop” (but keep in mind it was released in English as Dirty Money—the title we found it under on Netflix). The interesting thing here is that we had seen Melville’s Un Flic four or five years ago, but didn’t recognize it under the English translation Dirty Money, so we started watching it again, and just like the first time it was spellbinding.

The opening scene of the heist being setup and executed is beautiful (and is prominently featured in the trailer above), and if you haven’t taken the time to watch Melville’s films, I can’t recommend his work strongly enough, particularly Bob le Flambeur (1956), Army of Shadows (1969), and Le Cerc Rogue (1970). All four films are nothing short of brilliant. As for Un Flic, it features Alain Delon as the detective, Catherine Deneurve as the go-between femme fatale, and Michael Conrad as the club owner and criminal. The coolest thing about this film is Melville’s stark visuals and Delon’s ennui that comes from having seen it all before. There is a real sense of style and dignity after the fall from innocence in Paris during the 70s that is deeply compelling. 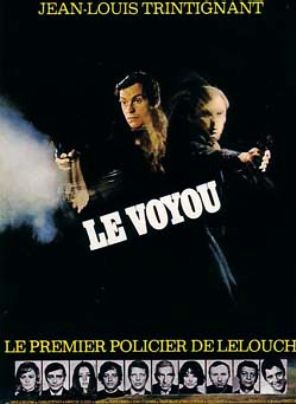 Speaking of Paris in the 1970s, Anto discovered Claude Lelouch’s Le Voyou (1970) (translated as “The Crook”) the next night after we watched Un Flic, and the two really help together brilliantly in terms of a glimpse into the wide range of approaches to noir-inspired crime films in France during the 70s. What I also liked about them was how different they were.

Unlike Un Flic, Le Vouyou was very much an upbeat and impossibly sunny crime film. Not only does it have the most bizarre opening sequence I have yet to see on film (watch it here), it refuses to let you get sucked into the idea of crime and criminals as necessarily tragic. Our hero/crook is Simon Duroc, a.k.a the Swiss for his criminal precision—played brilliantly by Jean-Louis Trintignant—is charming, likable, real and tortured just enough-but not too much.  He’s estranged from his lover and their child after 5 years in prison, and upon escape he brings his former lover back into his world by having her help him kidnap a struggling lower middle-class family’s 5 year-old child so that they can blackmail the bank where the child’s father works for a million dollar ransom by leaving the child’s fate in the hands of the bank. All of which would be a ridiculous storyline today, but works out seamlessly for “the Swiss” in Paris during the early 1970s.

And this 4 minute scene of the Swiss, his lover, and their associate driving around together after taking the bank for $1 million exemplifies the unique tone and approach to such a somber, dark theme in the most upbeat manner (the music is crucial throughout the film in this regard).

What’s more, the whole kidnapping—there can be few more horrific crimes in the mind of a parent—is carried off in a decidedly positive and  upbeat manner. This film refuses every stereotype of the genre, and is remarkably refreshing because the crooks are super cool, good looking, and they get away with just about everything. In fact, they escape from prison at least once, and I’d venture maybe even twice if I didn’t believe the film itself wasn’t simply having a moment of deja vu. The whole idea of taking a noir and making it an impossible fantasy of being smarter, cooler, and always two steps ahead of the police is a welcome change for me these days. I could watch a lot more movies where the impossible is actually possible, rather than feeding the ongoing media frenzy for impossibility and the end of humanity with such uplifting figures as zombies, survivalists, and psychopaths. That stuff just depresses me these days. If you want a break from the worst glandular media storm we’ve witnessed since porn in the 1980s, it’s time to check out Un Flic and Le Voyou (which can be found on Netflix streaming currently as Dirty Money and The Crook respectively). Enjoy!