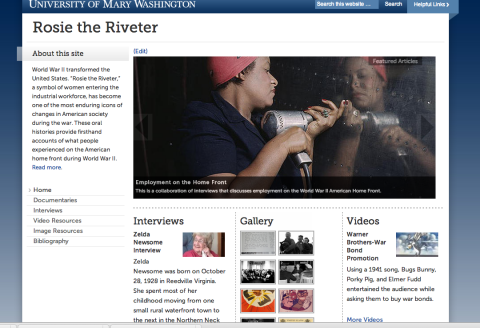 So, it’s been over a year since UMW has had it’s main .edu website running on WordPress. DTLT has been experimenting with the possibilities of aggregating posts from UMW Blogs into umw.edu (in fact, this post will aggregate into DTLT’s site on umw.edu). But the cooler part is to start experimenting with bringing the work students and faculty are doing in the classroom to the university’s website, and to that end Jess Rigelhaupt’s Oral History class last semester has done some really cool things.

Every semester I come and talk to this particular class about the possibilities for creating an open, online space to share the documentary histories they create over the course of the semester. We look at a ton of sites, and imagine what’s possible for them. The final project/product for the entire class is to build a site and populate it with all the documentary media on the assigned topic they create, collect, and curate for the world to access—public education writ large!

So, this past Fall semester they were working on Rosie the Riveter (very few topics could be cooler) and they decided they wanted to design the site to look like a umw.edu site—I imagine because they thought the school’s website looks pretty damned good, which it does! So midway through the semester we copied the theme used for umw.edu sites to UMW Blogs so they could have at it for their Rosie the Riveter project on UMW Blogs—which was at rosietheriveter.umwblogs.org. However, soon after we got the theme up the idea of “wouldn’t it be cool if this site was using umw.edu versus umwblogs.org” arose. And, as usual, we have the technology! All we had to do in this case is map the domain rosietheriveter.umw.edu onto umwblogs—and voila the resource site is using the umw.edu domain seamlessly!

Now, eventually I would love to see courses logging into umw.edu to create these kinds of resource sites, or having a seamless ways to syndicate and clone their work from umwblogs to umw.edu. But in the interim, I love this site as an example of what’s possible. Moreover, and more importantly, the students’ work is amazing. They have compelling oral history documentaries, a section that curates the pop culture films of the era (with everything from Woody Woodpecker to Hemp farming to a Syphillis PSA—now that’s educational!), as well as numerous interviews with local folks who share their experiences of living through that era.This is another example of undergraduate research at UMW finding its way into the public domain for the sake of sharing and making the world that much cooler. UMW has not forgotten the struggle, and we have not forgotten the streets 😉