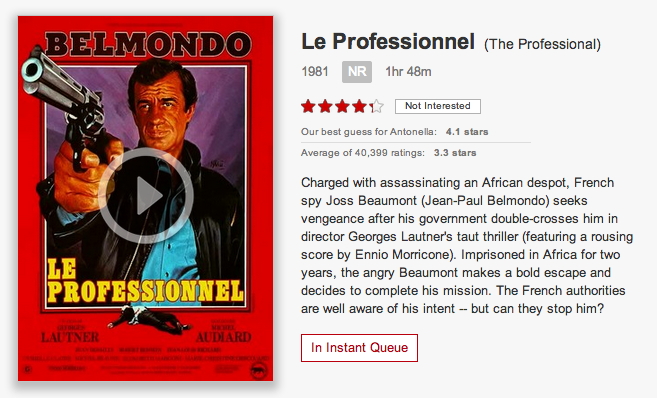 Anto and I continue our focus on French films, this time we moved from the early 1970s to the early 1980s, and I must admit that the 80s aesthetic is far cheesier—which is one of the many reasons I loved Le Professionnel (1981). The film is long and bizarre, it starts in the fictional African state of Mogwalabi, where the protagonist—secret agent Josselin Beaumont (Jean-Paul Belmondo)—is on trial for attempting to assasinate the country’s president. African post-colonialism anyone? The entire first 20-30 minutes attempts to place the viewer within an approximated African-perspective to varying degrees of success, but interesting nonetheless. In fact, the film reminded me a lot of First Blood (1982) and Rambo (1985) if you just inverted the chronological order of their release. Unlike John Rambo starting back in the States and then returning to Vietnam to exact vengeance for defeating the U.S. a decade earlier, Beaumont’s story starts in Africa only to return to Paris to seek vengeance on the agency that left him for dead. The ways in which the intelligent, paranoid political films of the 1970s morphed into big-budget action films about bad government during the 1980s is a fascinating rabbit hole, and Le Professionel is very much in that tradition along with such films as Capricorn One (1977), Alien (1979), Blow Out (1981), and Rambo to name just a few—there is a longer, more interesting list to be had.

What might have been most compelling about Le Professionel was what I imagined was a particularly French take on the genre. The French-speaking post-colonial African state that Beaumont escapes from seemed particularly interesting in terms of a conscious critique of the long history of France’s political exploits in Africa. But even more than that, I loved the particularly cheesy French one-liners that pepper this film (and as far as I can tell predate even Schwarzenegger by a few years). While eating a croissant in a typical Parisian cafe, our hero beats up a government agent for slapping his wife around during an interrogation. Once the fight is over and his adversary vanquished,  he shoots off this cheesy one-liner (which must have been huge in France at the time):  “The croissant is on my friend.” So good!  On another occasion our hero is being chased through a hotel by an agent he manages to elude and then throw into the room of a group of sheiks sitting down to dinner. Right after the agent slides through their meal, our hero peaks his head inside the room to tease: “Cous-cous with chicken!” Awesome.

I’m not entirely sure what to make of Le Professionel, I think I enjoyed it so much because it seemed to be a film that if I was 10 or 11 years old and had been born in raised in France, rather than the U.S., this would be what I would be blogging about nostalgically right now 😉 There was a sense of this film paralleling so many of the films I watched in the early 80s, but with some important differences in regards to the cultural context. I already talked about the African narrative of French colonialism, another instance of interesting differences might be the queer interrogation methods employed. For example, when Beaumont’s wife is being questioned, the commanding officer let’s a female agent forcibly seduce Beaumont’s wife for the information. A truly bizarre, sexually fraught scene that I can’t think of a real equivalent of in US cinema of that era, though that may be an issue of exposure rather than culture. Also, perhaps stereotypically, Beaumont has both a wife and mistress in the film whom he seems to love equally in their own way—what’s more there is no moral aspersion of his character for have a lover. It just is what French action heroes do! 🙂 As for Belmondo, not much of an actor in the end, but he is hot!

Another point about this film worth mentioning is that it features one of the great Ennio Morricone’s more famous songs, “Chi Mai,” which is far too emo for this film, in my opinion. That said, the song is hard to get out of your head, and once you hear it you’ll recognize it (listen to it below). In fact, it reached number 2 on the UK Singles Chart in 1981, how weird is that?

Finally, you can catch a montage of scenes from the film is your interest has been at all peaked below. What’s more, if you have Netflix in the U.S., or a good proxy elsewhere, you can watch it instantly. It feels good to finally find some interesting movies on Netflix’s Instant Watch, for a while therewe were dying. I think the key is trying to look for good, obscure movies and see if you can find one—once you find it and rate it (like we did with LeLouche’s Le Vouyou), Netflix makes some pretty decent connections for you around a theme. And films you couldn’t have possibly found through searching begin to emerge.

This entry was posted in movies and tagged French, Jean-Paul Belmondo, movies, netflix. Bookmark the permalink.