A Follow-up on Costs in the Cloud 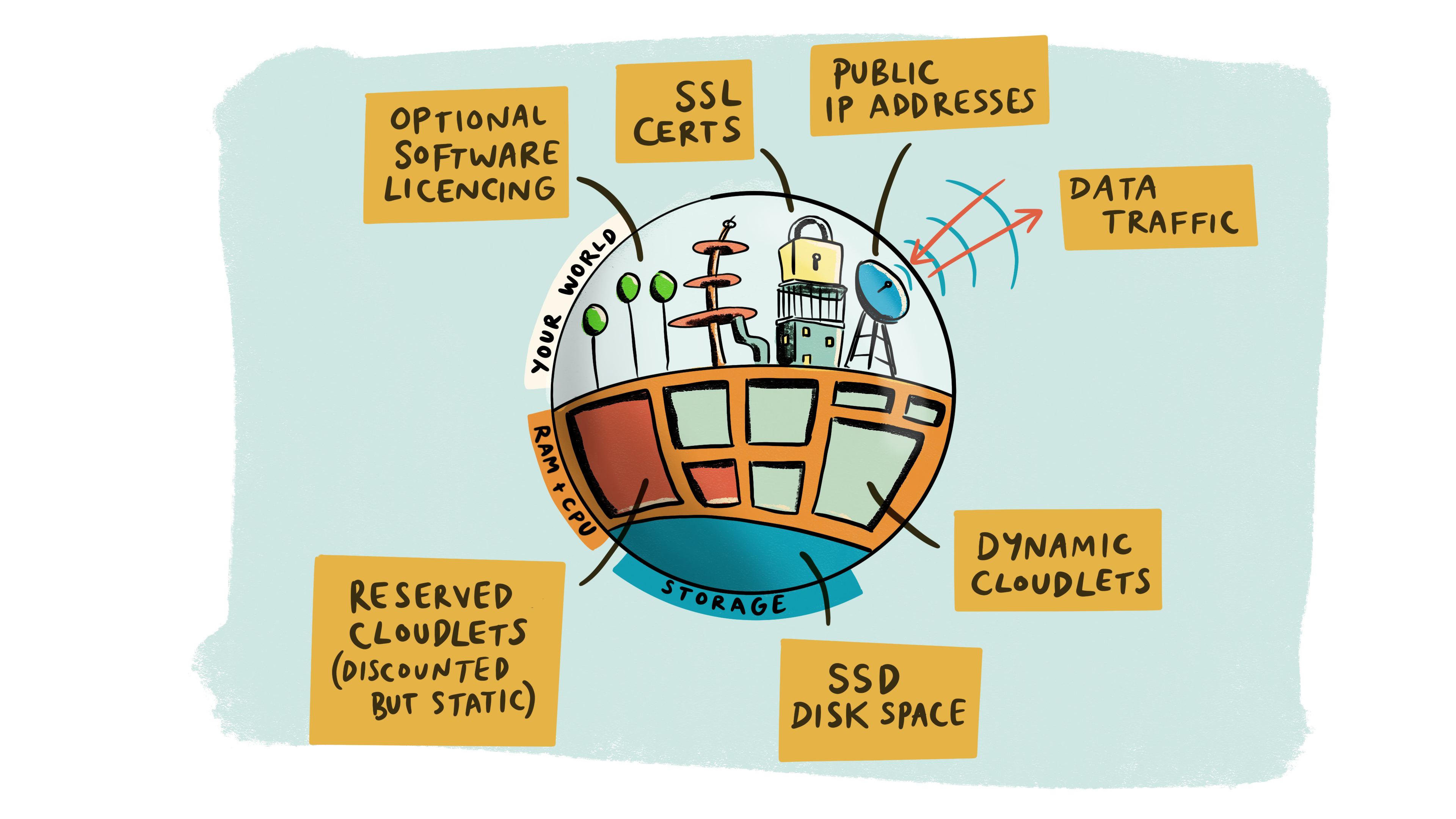 Yesterday marks the first full month of my being a paying customer in Reclaim Cloud. I wanted to take the occasion to follow-up on my post in July where I started projecting what the costs of hosting on Reclaim Cloud might look like given you only pay for what you use, and that will be variable over time. The uncertainty of variable pricing can be scary, but at the same time once you have a sense of what to expect it starts making a lot more sense. So, below is a look at my total monthly cost for August hosting this blog, ds106.us, my own Jitsi instance (which I turn on and off as needed), Etherpad, a YouTube Downloader app, as well as a number of parked applications I’m experimenting with. 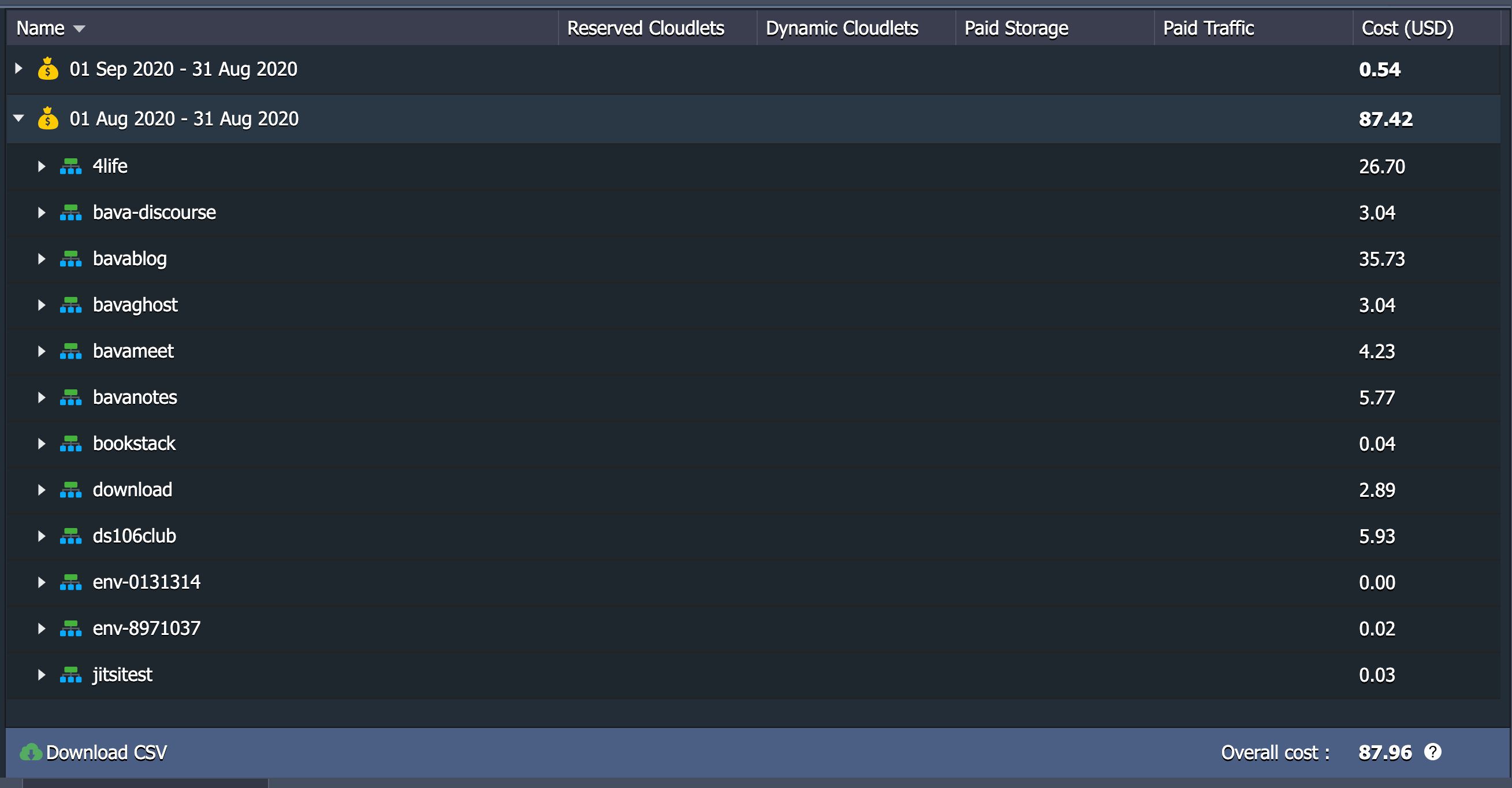 And the verdict is in, I spent $87.42 in August, and that breaks down as follows:

These are the apps I regularly used, and that works out to $81.25, the other $6.17 was spent on the Ghost ($3.04) and Discourse instance ($3.04) the former of which I eventually shutdown and archived to a static site. The remaining .09 cents I spent on testing various environments with a few different apps.

The nice thing about the Cloud billing is it gives you insight into exactly how many resources you used and what they cost at the container level and beyond. Above I exploded the view for this blog and you can see the costs are split up given I moved the environment mid-month. The costs are predominantly for the LEMP application server ($31.37) and the rest is for the dedicated IP address ($3) and the CDN I installed ($1.36) brings the total to $35.73. This is about half what I would be paying with Kinsta, which is nice to know, and about $5 more than Digital Ocean, although that did not include a CDN.

The big win for me once Tim added the Edgeport CDN service that Reclaim Cloud is utilizing is that I really had no more reason to pay Cloudflare for their CDN and caching service, effectively saving me $20 per month (actually $40 if you include I also had a pro plan for ds106). So, I am effectively $90 monthly for my web services through Reclaim Cloud, with a fair bit of room to experiment. I could probably shave off $8 or $9 if I started and stopped Etherpad and the Youtube Downloader application. I think this kind of monitoring of usage makes me consider not only what I am spending, but what resources I am using. And this is a bit different then just minding money—I could probably skip the bill and no one would say anything 🙂 —it’s the fact it makes me more mindful of what I can shutdown to save resources—such as Discourse and Ghost—it goes back to the idea of turning off the lights when you are not in the room. Same thing here, and it is what is unique about the Cloud, in shared hosting I spend far less, but at the same time I hog resources with the 15-20 applications I have installed (maybe two of which I am actively using) and never think twice about it.* I’m not sure sustainability is the right word given its environmental connotations, although it might be, but it does make sense in terms of ensuring our shared hosting infrastructure is not overburdened with accounts that demand more resources, such as mine.

Anyway, I guess I am still blogging about this because I’m so used to paying $30-$100 a year to host any and everything I want on a shared hosting server and I am trying to come to terms with a digital life outside the “free” third party trap services is something I have to start accounting for, and as a result budgeting accordingly.

*At least until Tim gently reminds me other folks are paying for those resources you are burning.