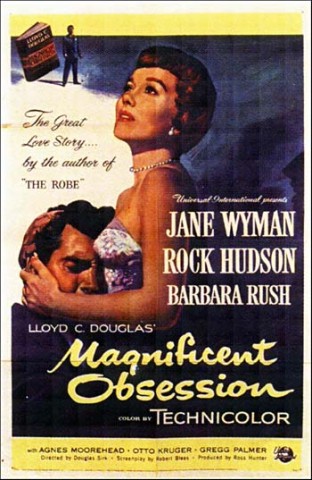 Anto and I have been on a Douglas Sirk kick the last couple of weeks, and there is so much to love about his melodrama of the 1950s. I’ve been particularly taken with Magnificent Obsession (1954) starring Jane Wyman and Rock Hudson (who return the following year to star in All that Heaven Allows). Between the lavish technicolor-flushed interiors and exteriors, the dreamlike suspension of reality, and an over-the-top sense of cause and effect I just can’t get the film out of my mind. I started doing some reading around to see what people had written about it, and found Laura Mulvey’s Fetishism and Curiosity (chapters 1 and 2 in particular) does a great job framing the theoretical discourse of gender and performance that emerged around Sirk’s melodramas during the 70s and 80s. Mulvey articulates a feminist critique that uses psychoanalytic readings to build on and complicates the Marxist interpretations of Sirk’s films during 50s and 60s:

The sphere of the feminine had to find a voice which could provide critical commentary on its genre, the domestic melodrama. At the same time, the ‘interiority’ of the domestic had to open up to reveal a new terrain, the terrain of the ‘unspeakable’. Feminism would provide the voice and vocabulary which could transform the content aspect of the melodrama, re-evaluating the domestic interior space, while psychoanalytic theory would provide the concepts which could transform the interiority of the ‘unspeakable’ into the unconscious, transforming the stuffy kitschiness of the melodrama into the stuff of dreams and desire. (33)

Rather than performing as spectacle for consumption, the female figure performs the woman who must perform, and for whom performance is invested in appearance. Performance, appearance, masquerade and their erotics shift from the surface of the screen into the story itself….the artifice of successful femininity constantly cracks and out of their characters’ vulnerability rise towering star performances. (39)

Such a reading of performance that moves outside of the story might also be mapped retrospectively onto Rock Hudson’s double life as gay man and Hollywood screen lover, and the struggles to protect his public persona as heterosexual heart throb. In fact, reading Mulvey makes me want to dig deeper into the questions of gender, performance, and the melodrama of the 1950s. There’s a ton more scholarship to read around this topic, but in terms of films I think Vincent Minnelli’s melodramas are next up, namely Tea and Sympathy (1953), Home from the Hill (1960), and The Bad and the Beautiful (1952) to start. It’s funny how two seemingly diametrically opposed genres such as melodrama and noir are catching my fancy simultaneously these days. Both seem to deal with the collective fantasy of Hollywood, just from very different class and gender contexts.

Anyway, none of this is what I meant to talk about in this post. Actually, all I really wanted to do is share this re-edited clip I created from Magnificent Obsession that focuses on the crazy cause and effect narrative that starts the films. To quote Mulvey:

The film’s opening premise is that Bob Merrick, a very rich and self-indulgent playboy obsessed with the thrill of speed, has an accident through his own irresponsibility, as a result of which Dr Phillips, head of the local hospital and much-loved and respected philanthropist, dies. Dr Phillips succumbs to a heart attack because the medical equipment he depended on [the resuscitator!] , in an emergency, is tied up saving Bob Merrick. The film story emphasises this sequence of cause and effect. The immature and irresponsible younger man causes the death of a man who occupies the place of the law, culture and moral worth invested in the Symbolic order. (46)

I loved the whole over-the-top cause and effect dynamic surrounding the resuscitator that starts the film, it’s what recently dragged me in and has me wanting more. I’d been a fan of melodramas like Tea and Sympathy, All that Heaven Allows, and Imitation of Life for a while, but after Magnificent Obsession I’m intrigued more broadly with melodrama as film genre along with its theoretical tributaries. All thanks to the resuscitator, I guess it’s the little things, I just wonder whose curiosity died so that mine could live  🙂

1 Response to A Magnificent Resuscitator