All I wanted was to comment, and HASTAC wouldn’t let me!

I was pointed to this post by Cathy Davidson about BlackBoard yesterday via this tweet by Shawn Miller, and I was interested in her post about BlackBoard and was ready to comment when I noticed that I had to register to do so. Now I know registering to comment is not the end of the world, but at the same time I immediately lose the impetus to share my thoughts when I have to go through a registration process, get a password (that is in some one else’s database), and then activate my account to leave a simple comment about my own issues with BlackBoard. Fact is, I won’t do it, it is too much overhead, and not worth the bother.  Also, it suggests an obstacle to participating and sharing that is in many ways unnecessary.

I said as much on Twitter to two HASTAC community members:

To which the response was basically we’re not too sure, let’s ask HASTAC, and the HASTAC twitter responded a few times: 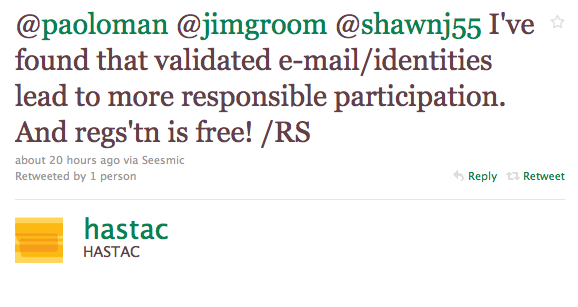 So, being a community member makes you more responsible? Not certain of this, but I am pretty certain it cuts back on the conversation significantly and said as much:

The conversation went on between Paolo Magnifico and HASTAC a bit longer after this discussion: 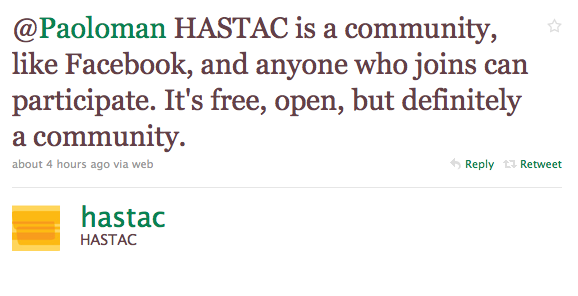 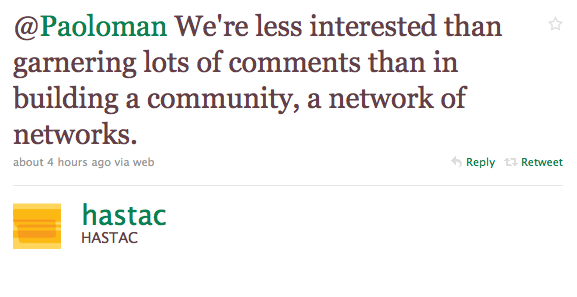 Fair enough, HASTAC sees itself as network of networks, but if that is the case, why not act as a syndication hub of the various conversations your network engages in around the web rather than pulling them into a space like Facebook, which is not really a very good example of a meta-network–a network that harnesses networks would be far more platform agnostic nor dictated by a specific idea of community. Networks in many way change the idea of community, just think about how I found Cathy Davidson’s post, and how my conversation with HASTAC continued on a space outside their Facebook like community space. A network of networks would allow a kind of streaming in of various conversations from a variety of sites and services, and the HASTAC community would be more of an aggregating hub of activity from around the web—at least that’s my take on it. Anyway, like I said, no big deal, no comment left, not signing up. But then I get this tweet:

Hmmm, all I wanted was to comment, I don’t want to necessarily join the HASTAC Facebook-like community. I have a network. I simply wanted to reply to Cathy Davidson—is that so wrong? A community of scholars is fine, and if HASTAC wants to build that than bully for them, but why define it at the level of commentary from others who don’t feel the need to join that community? Point being is the commentary and discourse often happens at the level of comments on a post in this space, and by making that more difficult than it need be you actually hurt your community my homogenizing the voices there. What good is a community without dialogue and commentary, why frame that dialogue around a rather arbitrary idea of community member? Sure it’s simple to become a member and free and all that, but at the same time it also creates a barrier that is entirely unnecessary by reinforcing a sense of community that is more deeply rooted in the inability to control comment spam on Drupal than letting others have a discussion along the path of least resistance:

This is all kind of silly I know, but annoying nonetheless. All I wanted to do was comment, I don’t want to join your community, rather I want to be able to join the discussion freely in many places, and not just at the HASTAC website, but certainly there at times. So, for all that is right and holy HASTAC, open your comments to everyone—the bava commands you! 🙂

13 Responses to All I wanted was to comment, and HASTAC wouldn’t let me!