Unlike the previous 4 posts in this series, there was never even a fragment of a post for the fifth day of our Alta Via hike. In fact, I’m composing this exactly 5 months after the final day of our hike in the Dolemiti mountains this past August. I’ll do a summary post that’s actually dated correctly, but I’m back-dating this blog post to August 9th, 2019 so it can stand with the others, but I do acknowledge the back-dating is a cheat to pump up my 2019 blog post numbers 🙂 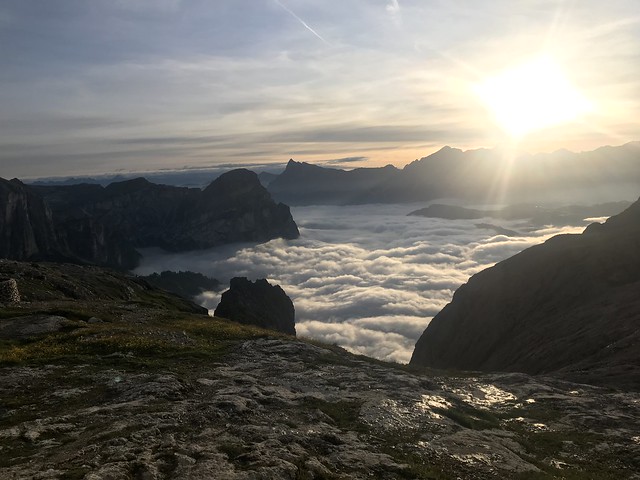 Day 5 was pretty much characterized by me still being exhausted from day 4. It was our final day, and most of what I was hoping for was less climbing and more descending. We were at our highest of the whole trip hitting about 2,950 meters. And I have to say, the morning started with the most spectacular floor of clouds I’ve ever seen. In many ways, it was a fitting reward for the pain of the day before. We hiked up another 300 meters or so from our rifugio, and found some amazing views (surprise surprise), our first significant snow pack, and quite a lunar landscape: 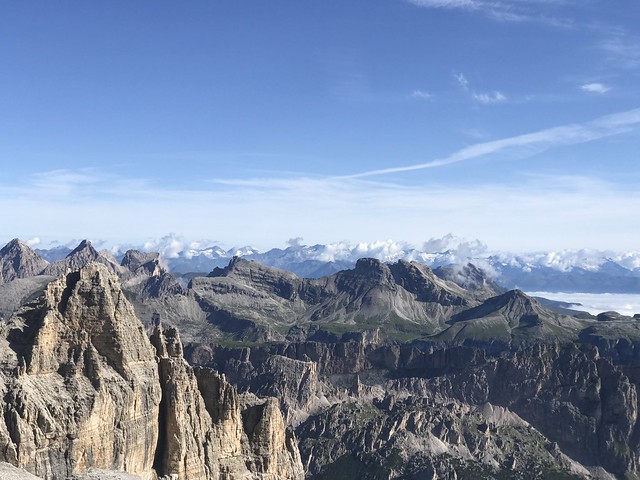 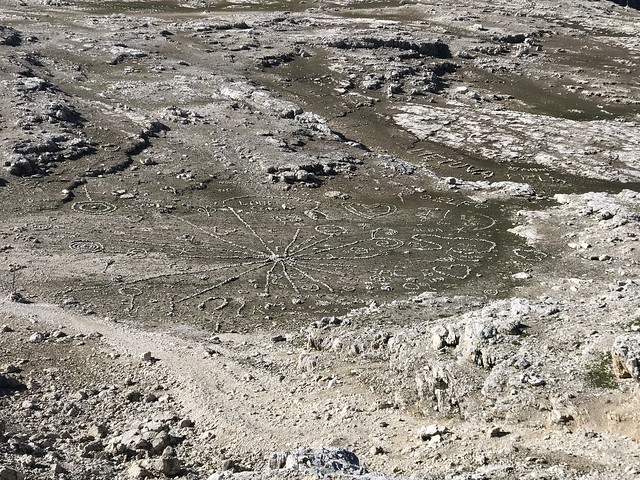 We even got our high altitude selfie in: 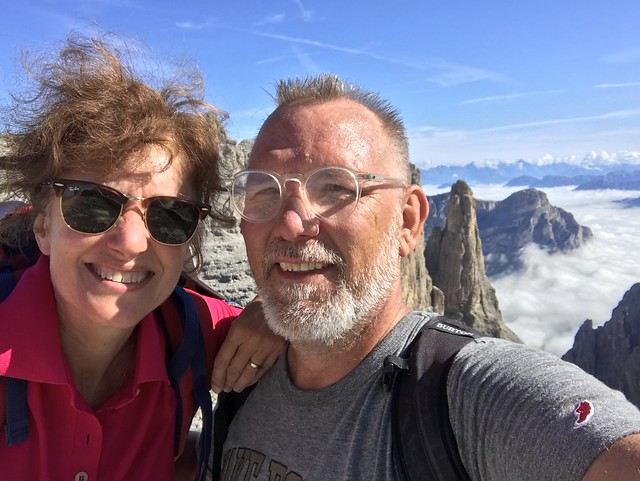 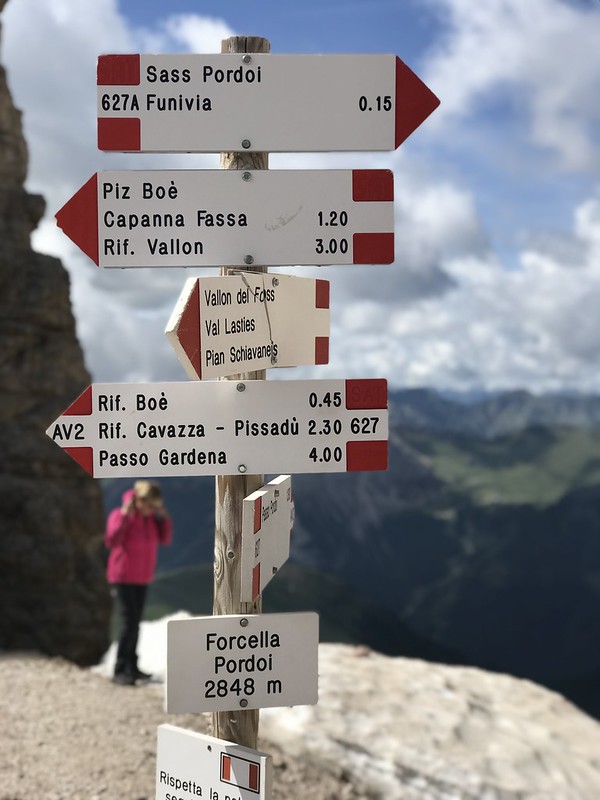 We hiked for a couple of hours to the Sass Pordoi, which has a cable car that brings up folks, and that explained the ridiculous amount of foot traffic at near on 3000 meters. In fact, it was more crowded up there than just about anywhere we’d been the whole trip. It was annoying given I had to bust my ass the day before to get to such heights, and these day trippers were eating my oxygen. 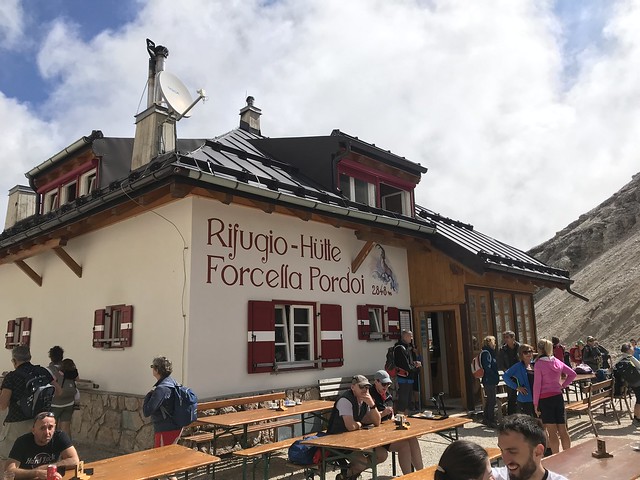 In fact, the rifugio at the head of the pass we would have to climb down was packed, and I found the re-entry into civilization a bit jarring—although the rifugio’s view of the valley below was quite nice. 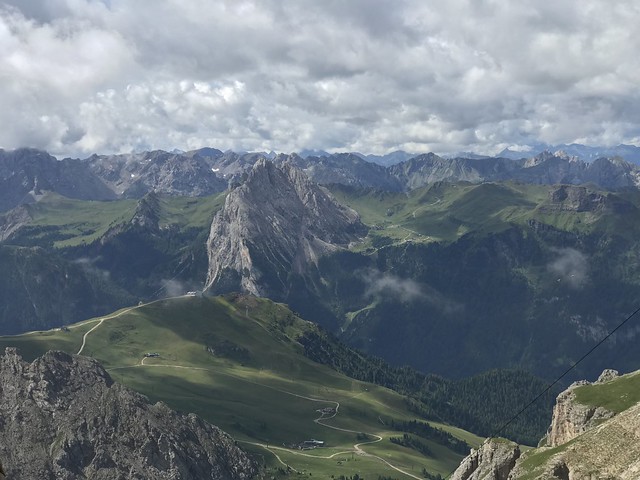 We stopped for a bit, and then took the long, rock-sliding path down to the valley. It was painful on the legs, and the footing was treacherous, but the view reminded me of the US Southwest—it was spectacular: 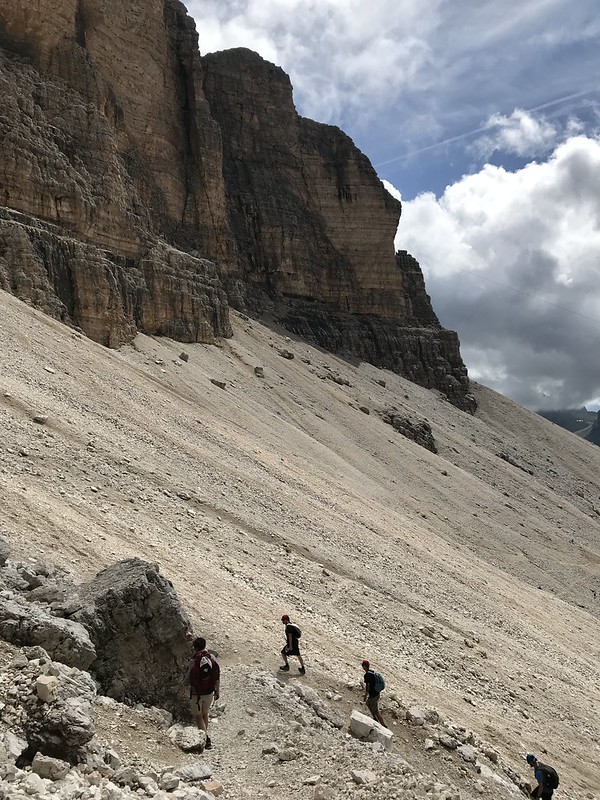 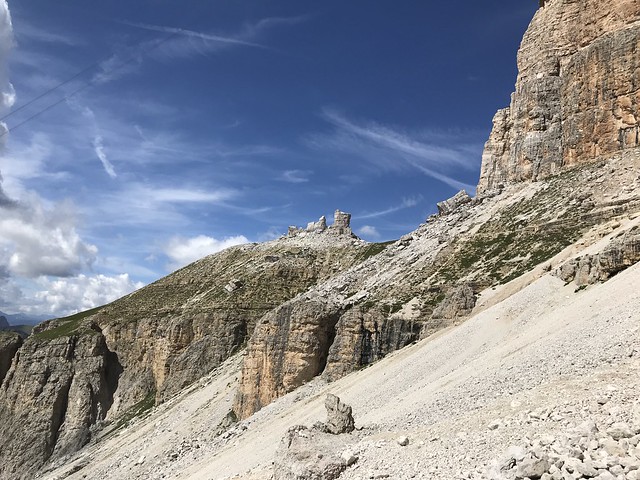 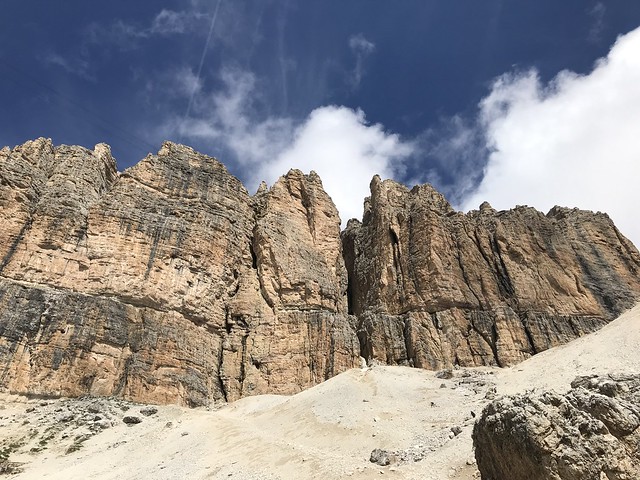 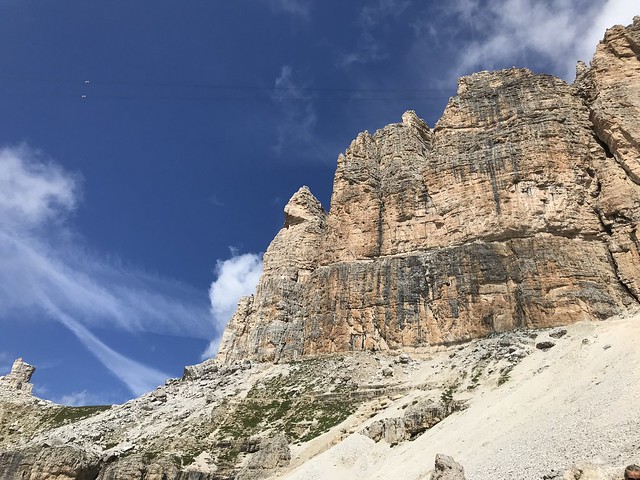 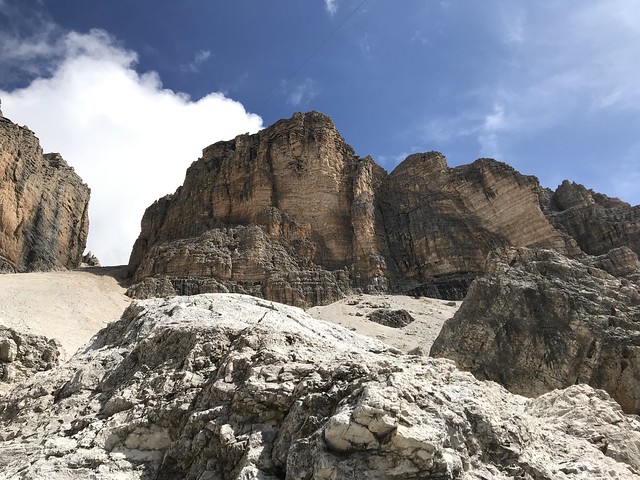 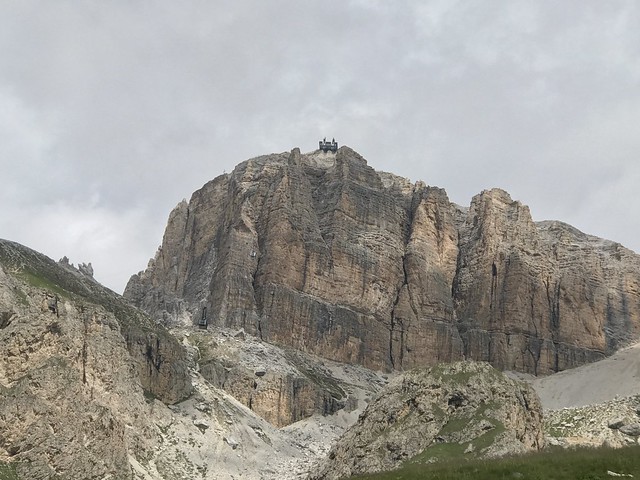 And when we finally made it down, it was a god damned parking lot, literally: 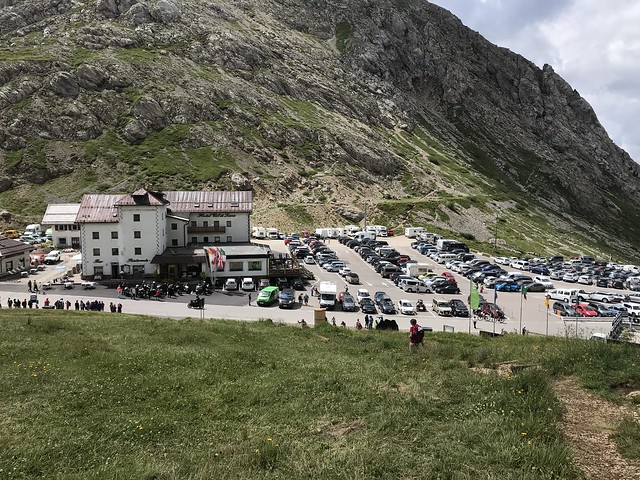 So weird to come back into crowds after 4 days of silence and relative isolation. But it was also cool to realize we had hiked so far that we were actually able to eat lunch on the fifth day in a different region of Italy: 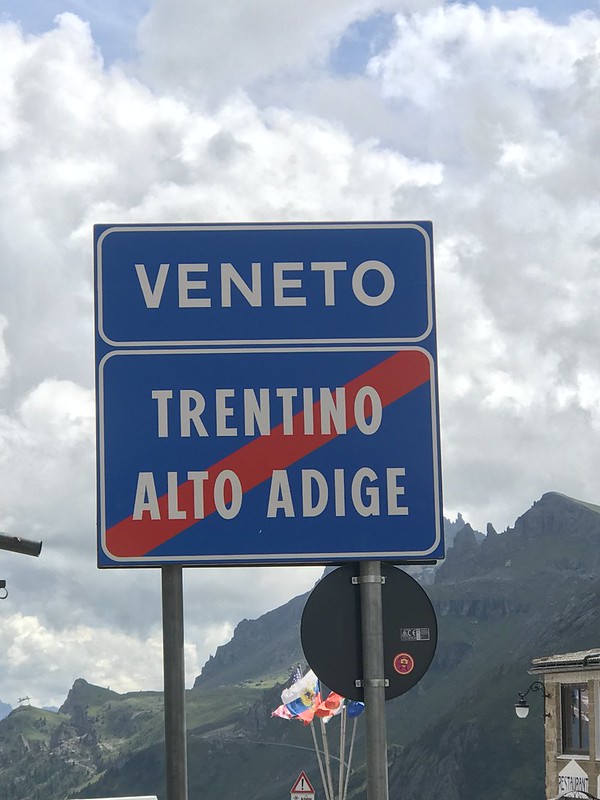 It was my first pizza and coke in 5 days, and it may have been one of the best I ever had. The malga food is quite good—in fact I can’t imagine you eat so well on any other hike like this anywhere in the world—but after a bit a man misses the joys of God’s most perfect food: the margherita! After lunch we had our last 2-3 hour leg of the hike, which brought us up close and personal with the tallest mountain in the Dolemiti range: Marmolada.

She’s fine, she is! You can see the Dolemiti’s biggest glacier in full effect:

It was a stunning hike, with cinematic views the whole way: 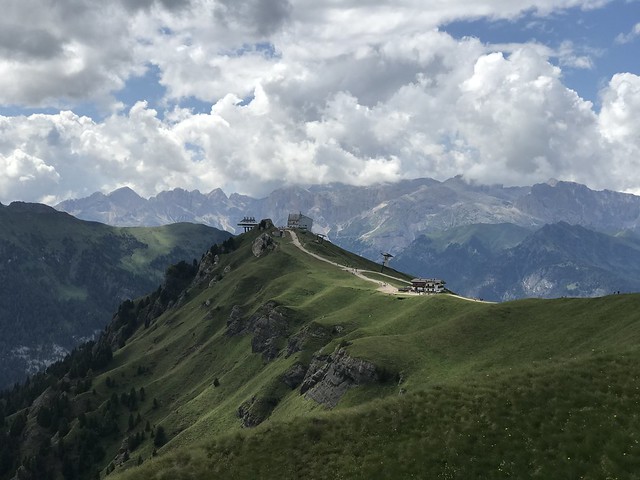 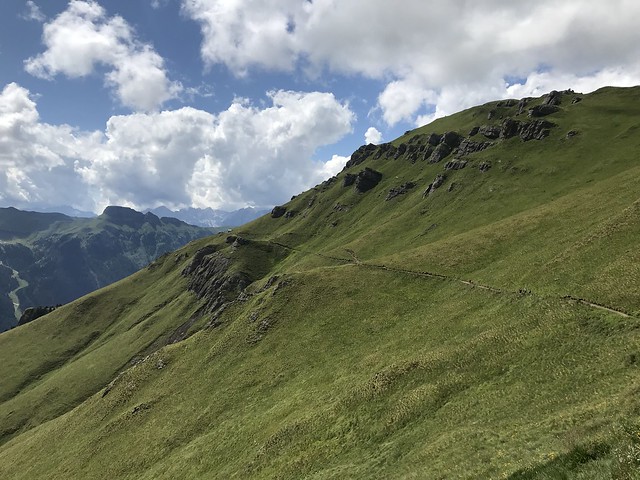 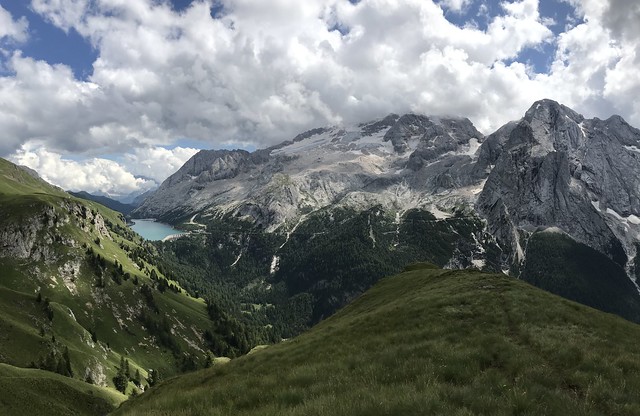 We enjoyed the high resolution of our natural IMAX theater, and we even got to see some of the technology they use to try and control avalanches by starting them: 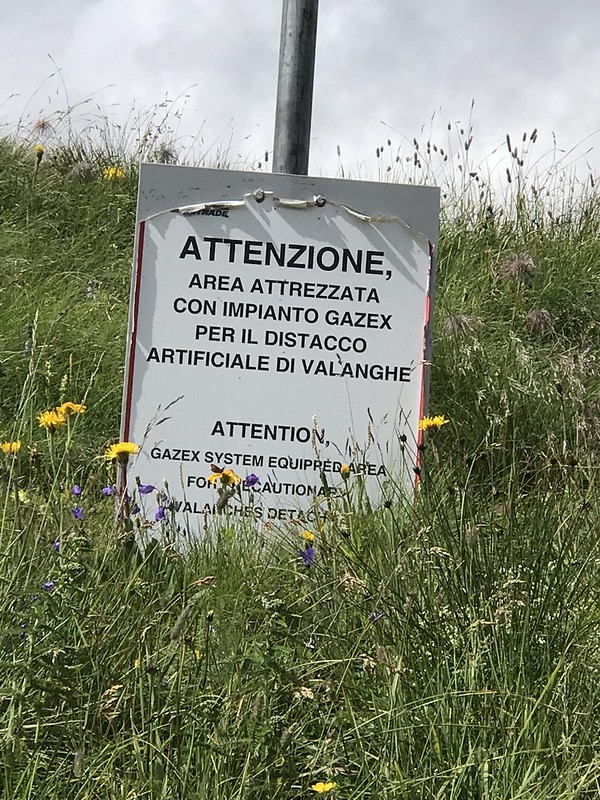 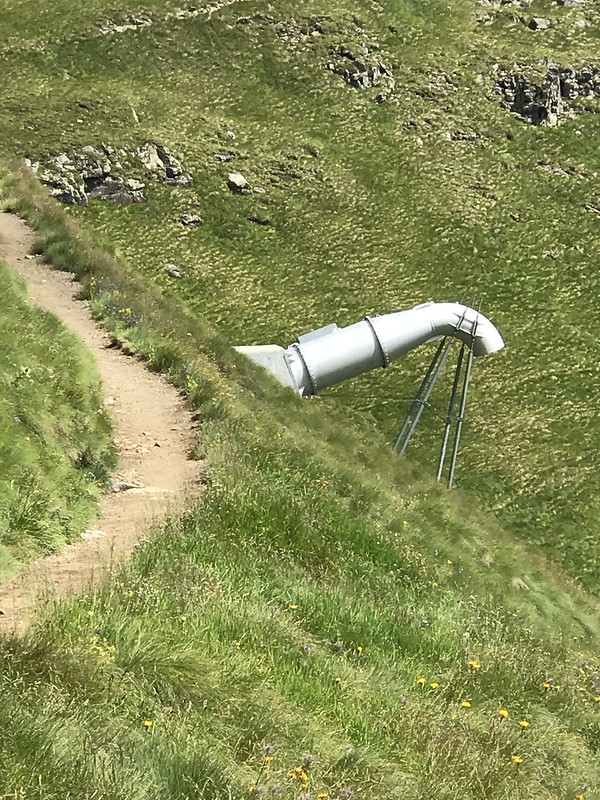 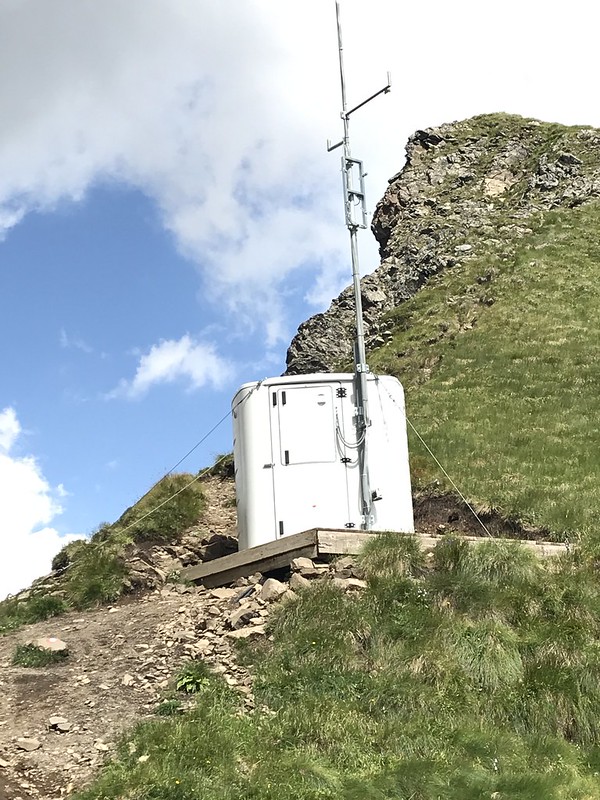 It was a fairly leisurely journey compared to the day before, and I appreciated that all the more. And not to be outdone by the beginning or the middle, the end of our epic journey was punctuated with Lago di Fidaia, a man-made lake from the 1950s created  as a result of a hydro-electric dam built to harness the power of the Marmolada run-off.

Fake can be just as beautiful! 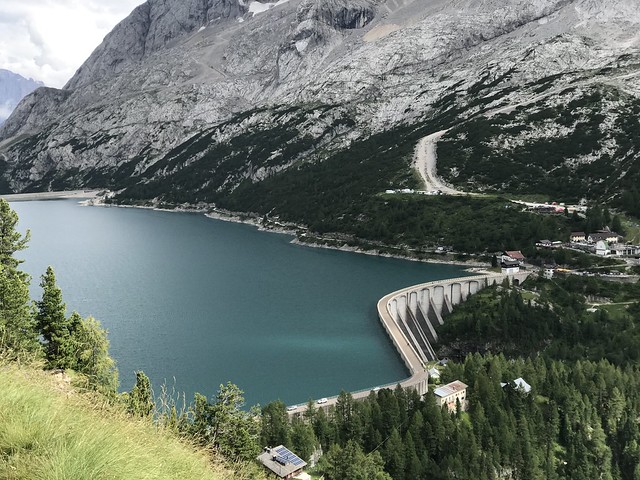 And with that our hike was ended, over 50 miles and god only knows how many feet of total elevation later we found ourselves on a bus back to Trento that evening. I’ll have more to say about the trip in summary, but for now let me just say not since the San Diego Marathon in 1990 have I been so proud of a physical feat I accomplished. It was something special, and 5 months later I am still desperately trying to re-live the glory as I catch up on posting the images and getting down as much as I can remember.