It was hard to leave Rifugio Gardenacia [sic], as I mentioned in my last post, it ruled! But onward we must go, the forced march stops for no man or woman (and all those on the spectrum)! We were leaving from 2000 meters, which in our warped hiking world, seemed low, up to 2500 meters.

The above fragment was the beginning of a fourth post from our 5-day hike in the Dolemite mountains. I started this one soon after we ended our epic hike on day 4, but my phone charging cable failed for good that evening leaving me without much in the way of battery life.* I was blogging from my phone, given this was a laptop free venture, and it was surprisingly comfortable. But nonetheless, the post was never finished so what’s to follow is a post-facto summary 5 months later. It’s a shame I waited so long because day 4 was the most memorable of the trip, not only for a gorgeous morning cloud cover as we woke up in Val Badia, but also for the lunar landscape on the way way to Passo Gardena and he final, grueling trail of the beast to end the day at 2600 meters.

But let’s start at the top, waking up on cloud 9 in Val Badia: 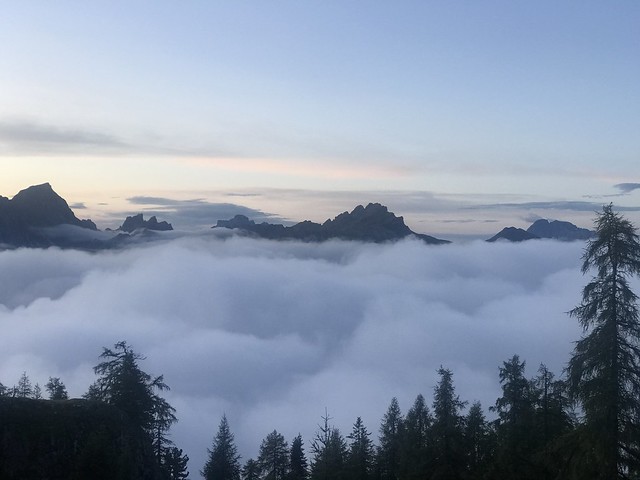 The cloud filled valley was a brilliant site to wake up to, and the only thin cooler was watching the mist burn off in front of you eyes: 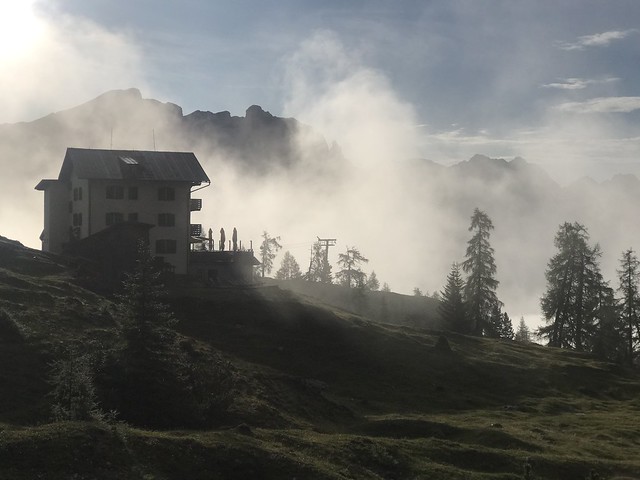 Our rifugio in Val Badia was magical, and begrudgingly we left taking trail #5. We climbed out of the valley in order to find our way back to Val Gardena. In fact, that morning had some of the most beautiful vistas we’d seen thus far, and as the sun started breaking through it was downright glorious. We even got a peek at Marmolada—the highest peak in the Dolemite mountain range: 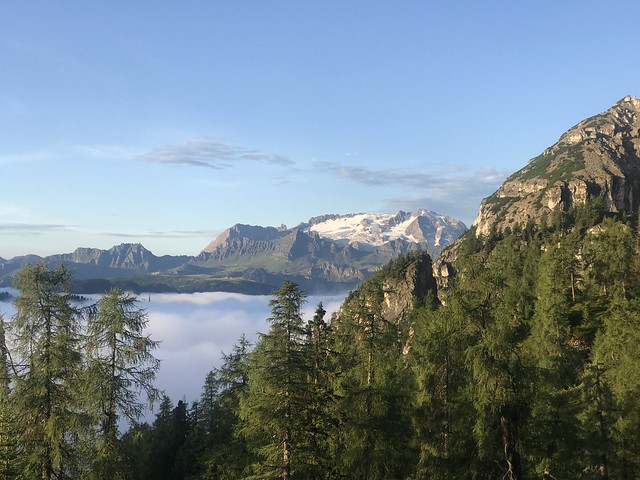 And rather quickly that mornin we were high above where we spent the night: 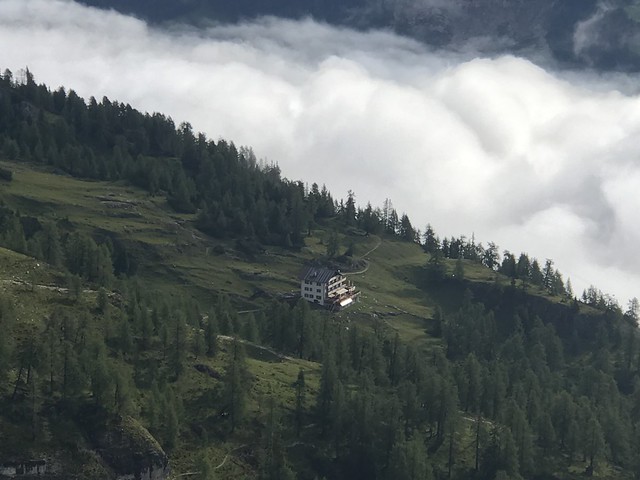 And as we started the first serious stretch of the day, the burn was still underway:

Did I mention how gorgeous it was? 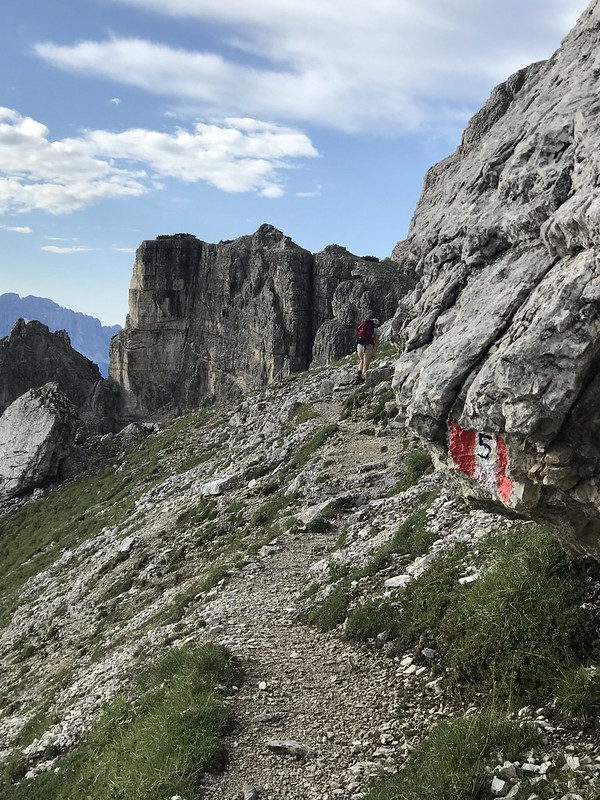 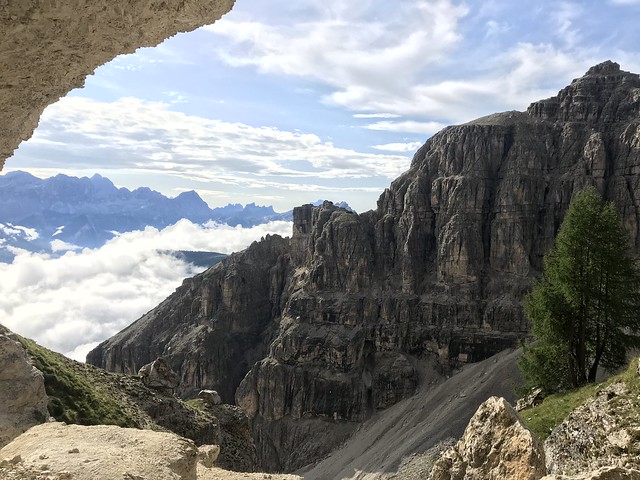 We made it through the first of what would be three passes on the day, with the final one being absolutely brutal. We hiked over 12 miles and the equivalent of 280 flights of stairs up. It was brutal, but we’re not at 666 (the Devil’s Pass) just yet in this post, so we can still reflect on the beauty of that hike as we returned to the high plains that were reminiscent of Ireland: 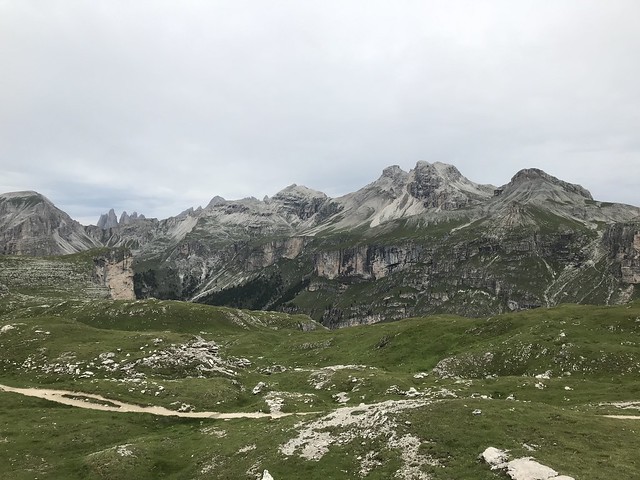 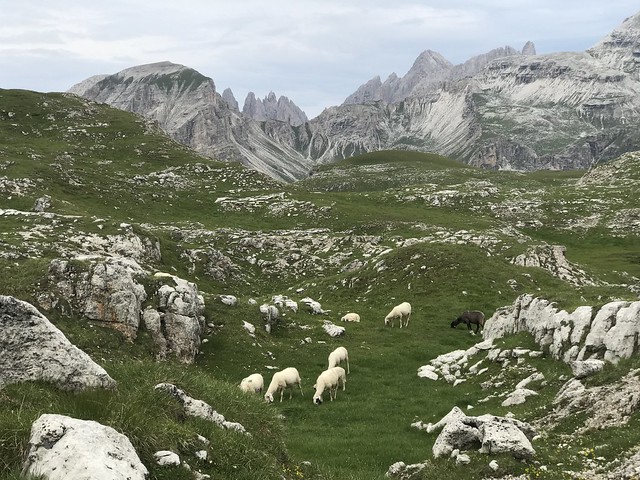 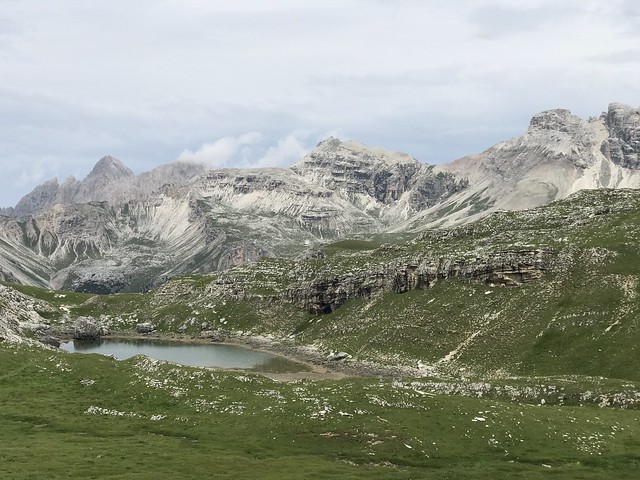 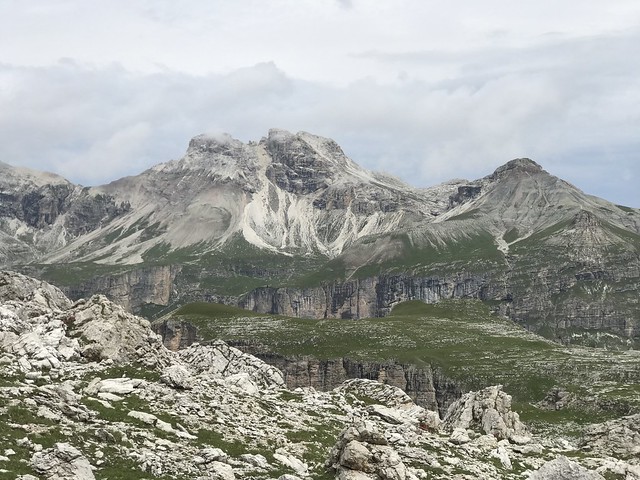 We eventually made it over our second pass taking us from Val Badia back to Val Gardena, and getting us back on trail number 2, the official trail of the Alta Via. 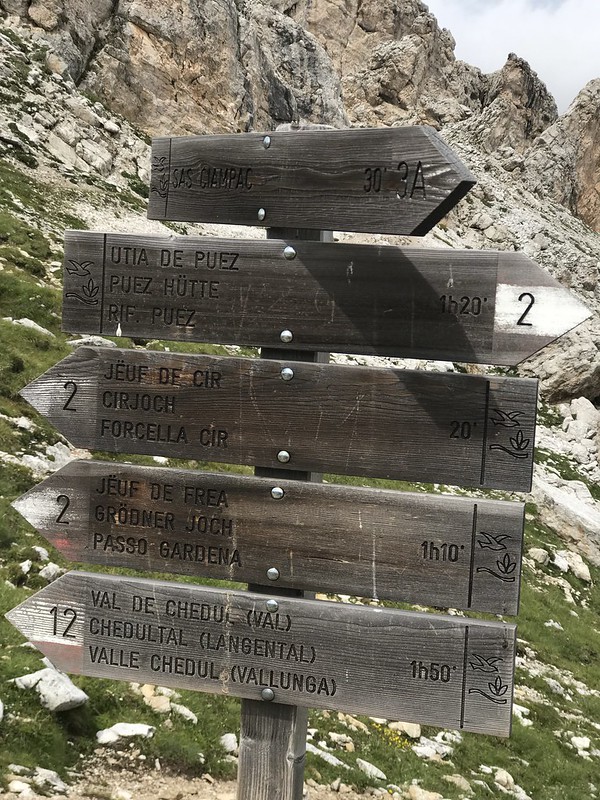 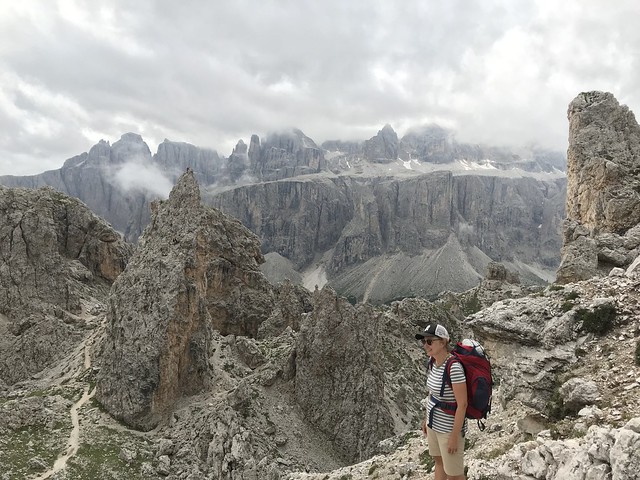 On our way down o Val Gardena we saw some serious alpinists taking a peak, it was quite the sight: 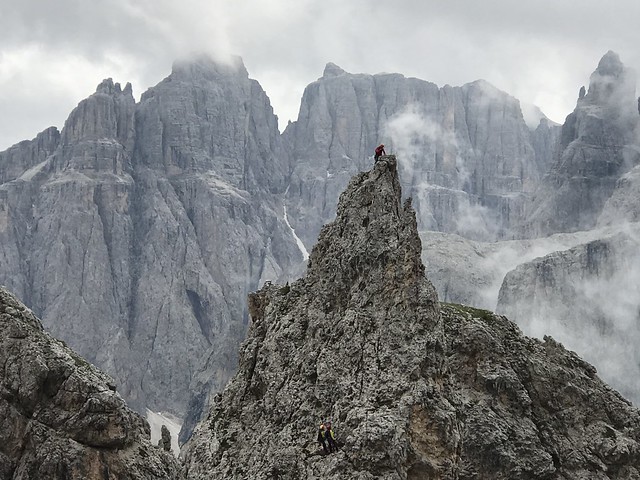 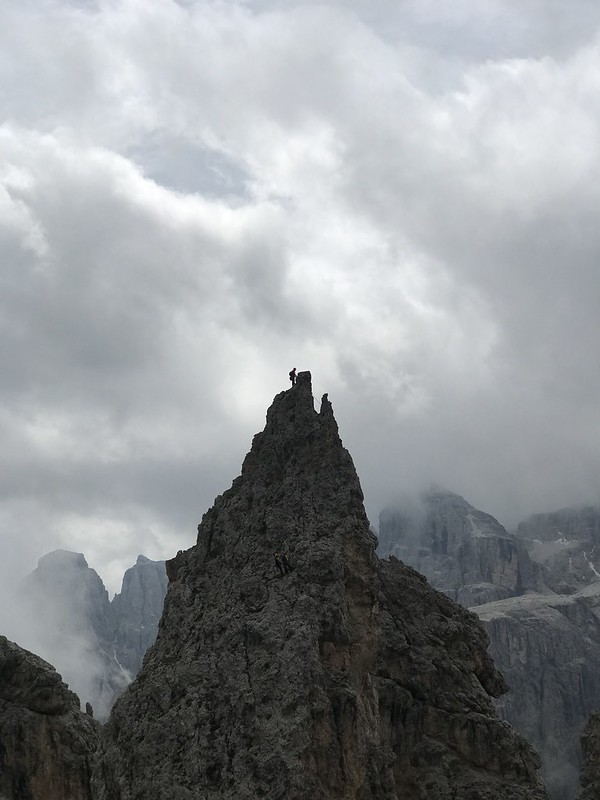 Just as I was starting to feel accomplished, these show-offs arrive on the scene. 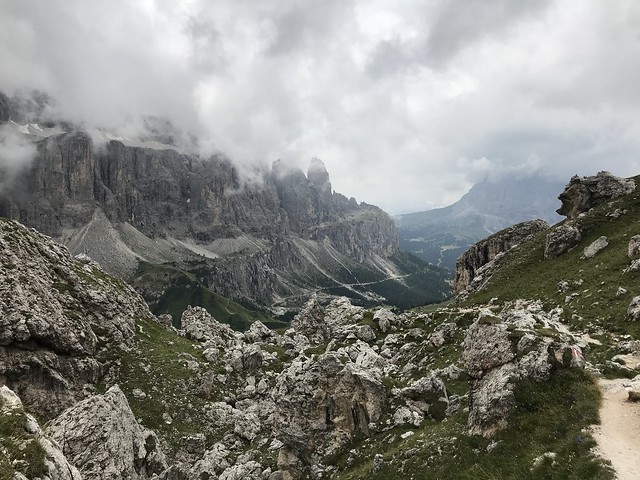 The way down was like something out of Lord of the Rings, and we were able to make it to a malga in time for lunch, so all seemed good! Until 666…. 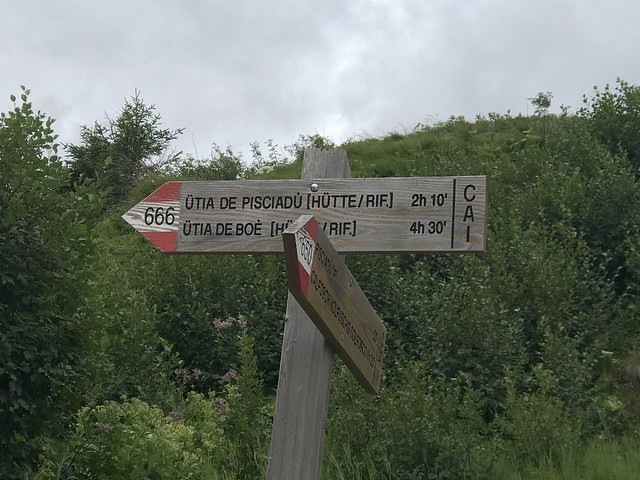 …. the trail of the beast, indeed. The last 2 and a half hours of the day wee the most brutal of the trip, and after already hiking 10 miles, the last 2 were pretty much 120 flights up, and often straight up. It looked doable enough to start…. 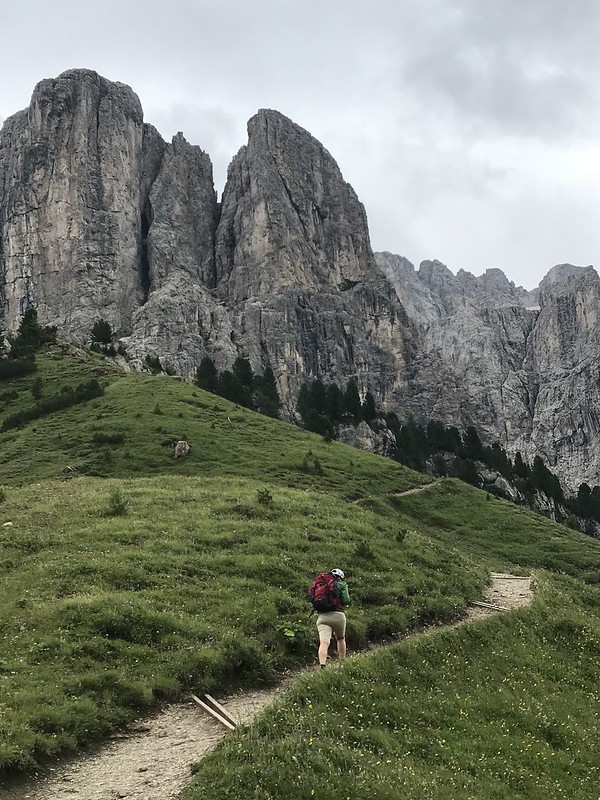 But shit quickly got rough: 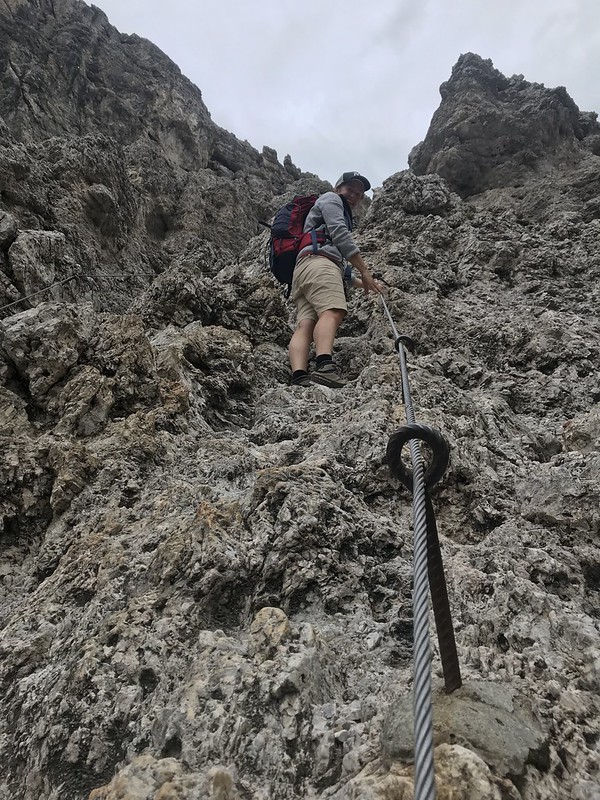 The views down were nice, and I know because I rested enough to enjoy them, but there was no getting around the fact we had to keep climbing up, and given a storm was forming—we had to do it fast: 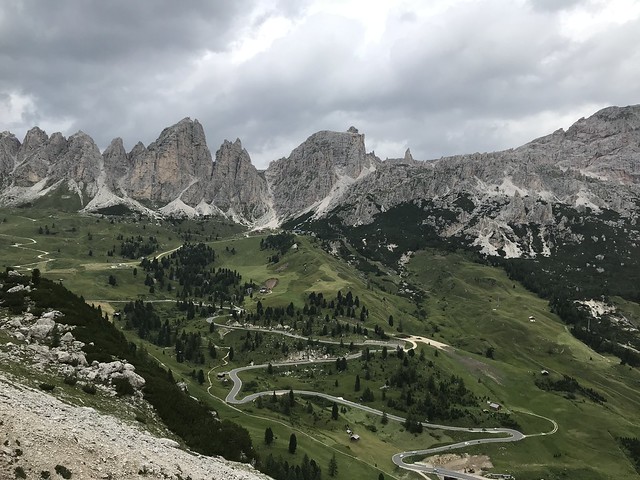 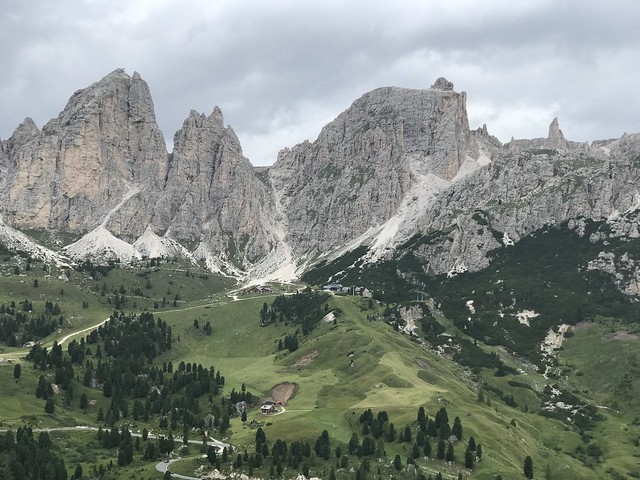 But the ferrate kept coming. 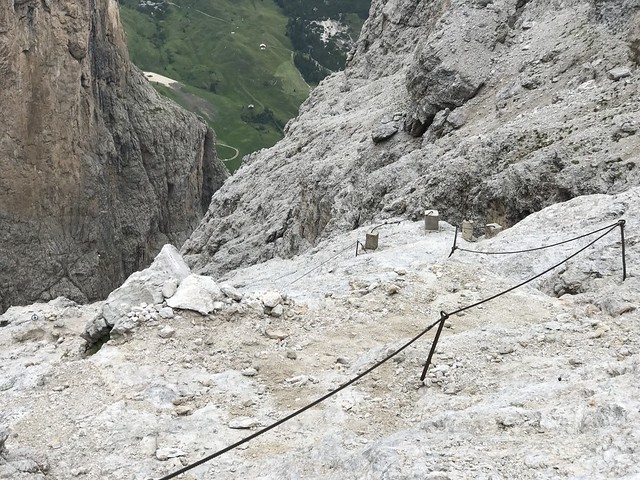 But all that training paid off, and we made it with 20 minutes to spare before the sky opened up. Despite the pain, I must admit the views from above were quite nice: 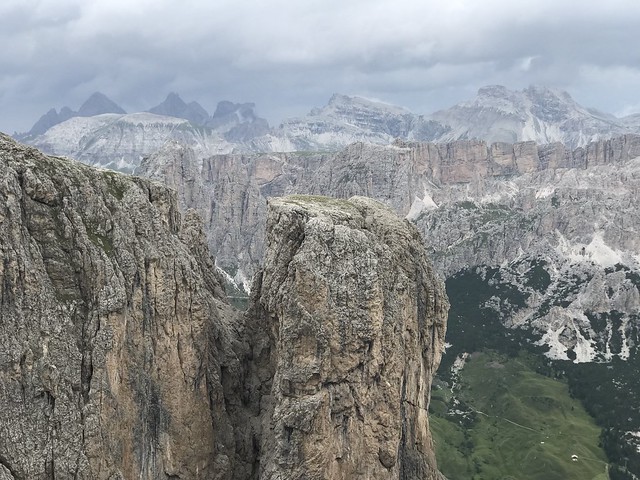 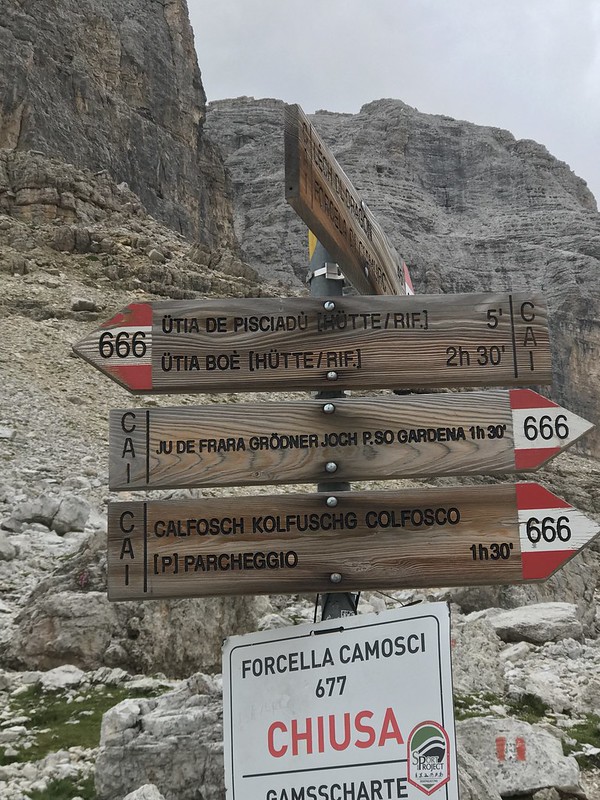 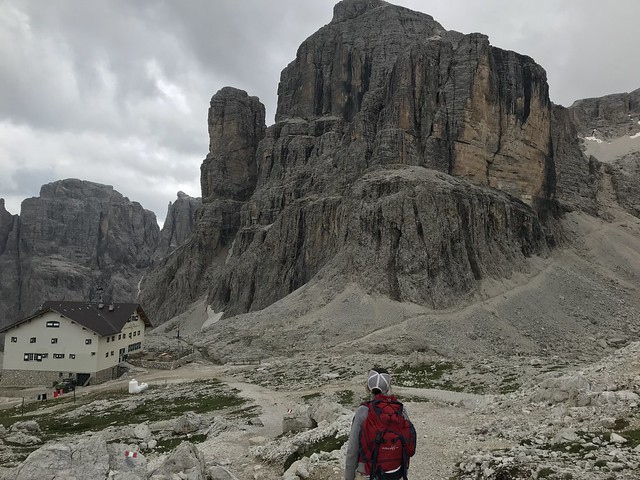 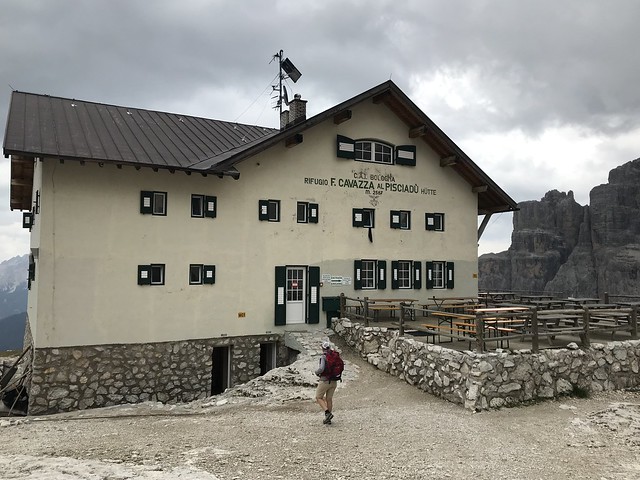 It was good to have a bed for the night at 2600 meters (even if in a room filled with 12 other strangers), and the evening after day 4 had me doing a gut check. I mean, I was inhaler boy not that long ago, what the hell am I doing up here. Bu, I guess we’ll see how this ale ends for our hero in our fifth and final post….

*In fact, truth be old, I was so desperate for a charge I resorted to unplugging my bunk mates phone (not Antonella, to be clear) in the wee hours of the morning to make sure I had enough for the following day. Pro tip, always bring two phone chargers in case one breaks.