America’s Bloody Register: It’s all about the “Joes” 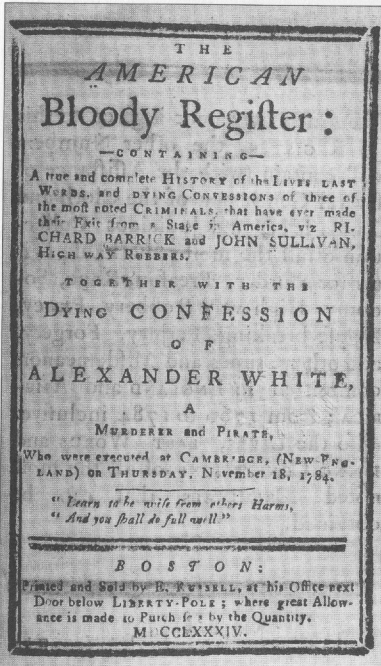 In the True Crime seminar last week we discussed Foucault’s Discipline and Punish alongside some of the more sensationalized texts of class and racial others like William Fly (Pyrate), Joseph Mountain (Mulatto/Highwayman), and Thomas Powers (“a Negro”), this week we move more definitively into the early stages of the print-based entertainment industry  emerging around true crime during the Revolutionary War and well into the early 19th century.

America’s Bloody Register is, as Daneil E. Williams notes, North America’s earliest True Crime magazine. As an early crime serial,  it framed its business model pretty squarely on “Murder, Treason, Rape, Sodomy,High-Way Robbery, Piracy, House-Breaking, Perjury, Forgery, and other Crimes and Misdemeanors.” The move from correcting and reforming narratives to a “number of curious and Useful pieces” is well underway—crime narratives as lurid entertainment is in full effect. The shift to a model for exploiting crime as a shocking tale to garner readership is not necessarily new to America’s Bloody Register , it takes its name and  approach from a British serial around the same time called The Bloody Register—you can buy it on Amazon now for $1700!  As Linsday notes, the first two narratives in issue #1 of America’s Bloody Register about the theiving  exploits of Richard Barrick and John Sullivan  are all about the money. It reads like a laundry list of colonial currency taken in from various people in new York and Connecticut. In many ways it reminds me of the list of booty we get when reading Joseph Mountain’s rather boastful account of his conquests as high-way man in England and the colonies.

Among the most important of these coins [in the colonies] were the Portuguese Johannes and moidore (more formally, the moeda d’ouro) and the Spanish dollar and pistole. The Johanneses were gold coins, 8 escudos (12,800 reis) in denomination; their name derived from the obverse of the coin, which bore the bust of Johannes V. Minted in Portugal and Brazil they were commonly known in the colonies as “joes.”

This complex currency  of the colonies might also explain why so many of the these crime narratives were focused on counterfieting. Owen Syllavan’s narrative is just one we read , but Daniel E. Williams’s Pillars of Salt anthology includes three more examples of the capital offence of passing bad currency in the narratives of John Jubeart, Herman Rosencrantz, and Joseph Bill-Packer. Interestingly enough, narratives like Bill-Packer’s ad Rosencrantz start to place greed and the love of money as yet another overarching theme in these crime narratives that frames the existing tensions around wealth and class in the colonies. Certain kinds of crime still had everything to do with the haves and have-nots, greed, status, and exploiting weaknesses within a system.

And while I am at it, there’s a couple of more facts about this text I found interesting. It’s all happening within the context of the Revolutionary War, and the fluid movement Barrick and Sullivan on land and water around the Atlantic might point to how certain individuals were using the political upheaval to the moment to their own benefit. Additionally, both of them are Irish, which frames another kind of racial and ethnic villifying that was going on in so many of these narratives, and can be paralleled to racial-porfiling of African-Americans emerging in the accoutns of Mountain and Powers. The other interesting things, at least for me, is how much more mobility and freedom these theives seemed to have as a result of the limits of a communication infrastructure at the time. The majr technological innovations of this time were predominatly maritime, and this shows in the ways so many of these narratives focus on the Atlantic as a source of escape, freedom, and possibility, particularly African-Americans before the Revolutionary war—but more on that in another post.

1 Response to America’s Bloody Register: It’s all about the “Joes”