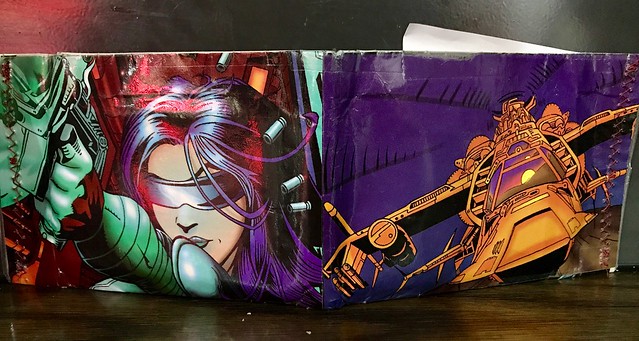 Strangely enough, I have developed a bit of a tradition around the most unlikely of things: my wallet. Every year for the last 3 years I have been changing out my wallet for a new one. It started with the Hulk wallet I bought back in 2014 at the Ponshop in Fredericksburg. It is made out of old comics and then laminated. It started to fall apart after I moved toitaly, and I lamented the impending loss. But as luck and work would have it, I returned to Freddy on business in January of 2016 and updated my wallet with a panel from Red Sonja-once again thanks to the Ponshop. This June ,when I was back in Fred Vegas briefly before the Domains conference, I once again found myself at the Ponshop procuring yet another comic wallet. It has become a thing.

Why? Well, because I really like them, But beyond that, more than anything I have had over the last few years, they have proven to be an amazing conversation piece. Folks always ask me about my comic wallets, and I always love talking about them. The wallets have proven be be an extremely effective catalyst to brief connections around pop culture, something I really value. Anyway, the most recent wallet is awesome, but I have no idea what comic it is from, any folks out there have an idea?

This entry was posted in fun and tagged comics, fun, Ponshop, wallets. Bookmark the permalink.