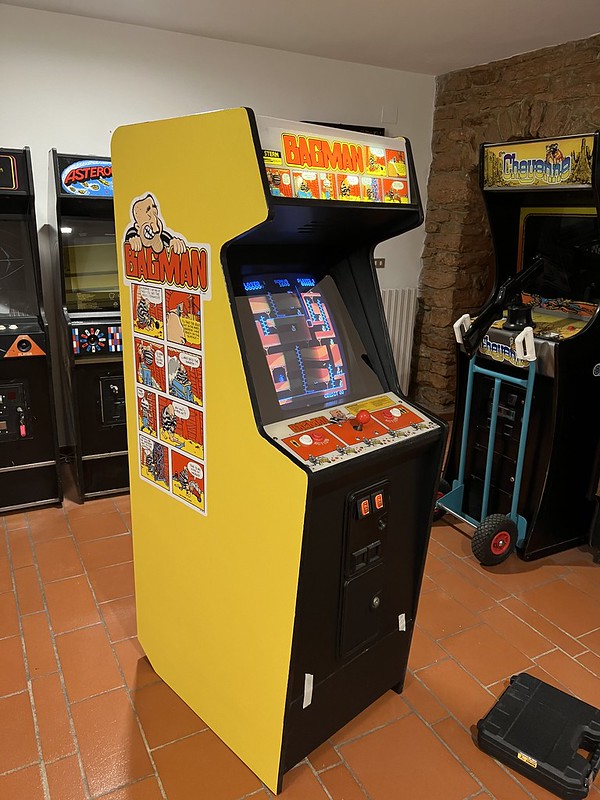 Moving on from “Saving the Condor,” the next restoration project was for the 1982 arcade cabinet Bagman. This golden-age game was created by the French arcade company Valadon Automation, and licensed to Stern in the US and Taito in Japan. Valadon followed-up with Super Bagman (1984) that I have yet to see or play in the wild, but I must say the original Bagman is difficult enough!

I bought this cabinet here in Italy, and I choose it because it was in good shape and almost entirely original—not to mention a bit off the beaten arcade path. The glass bezel is the only original piece missing, and I must say the comic margins add a nice touch: 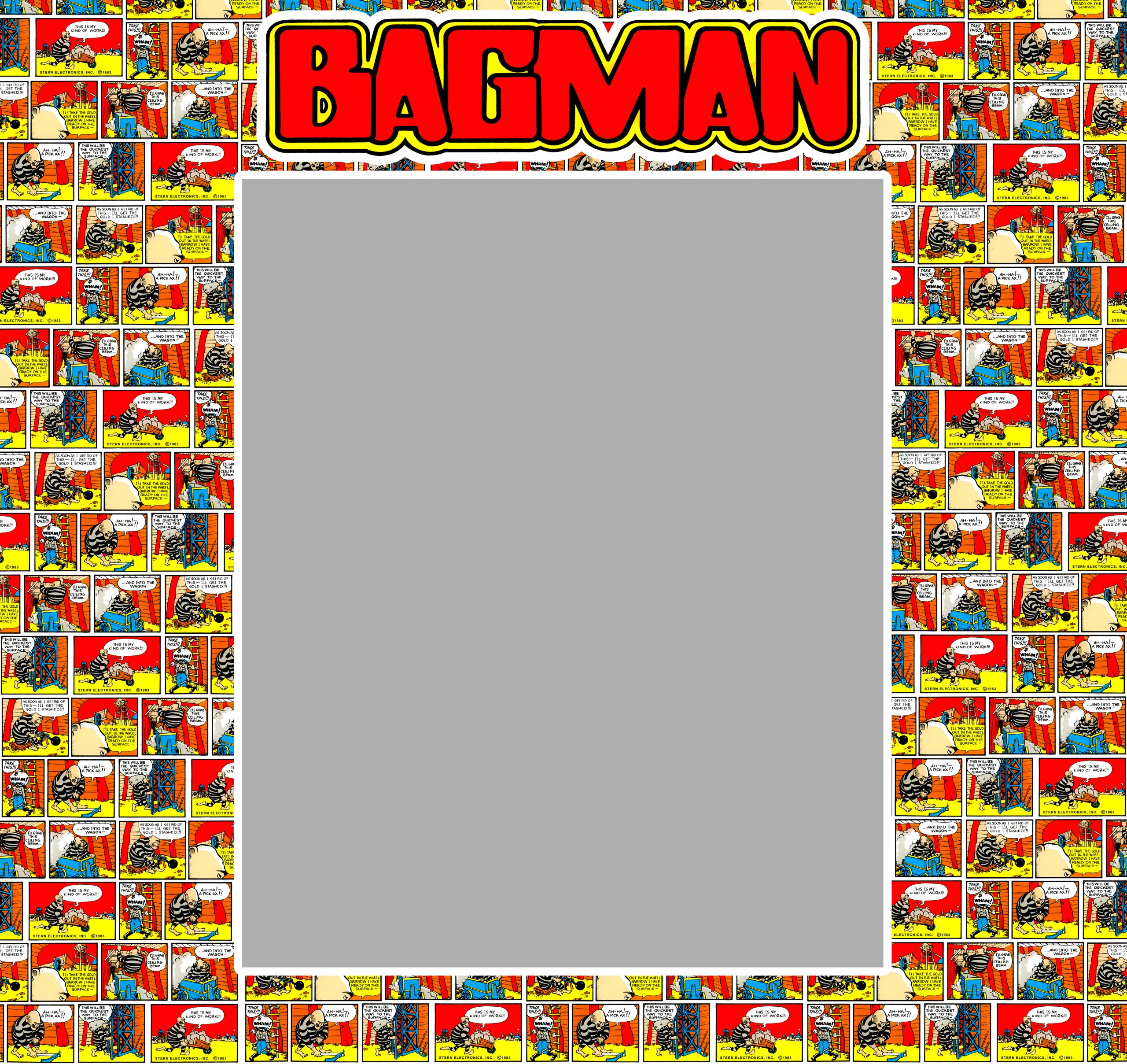 I’m considering getting the original image embedded above printed to the glass bezel fitted to the cabinet, but first I have to find someone who does that work. Not essential, but that would truly be the finishing touch. 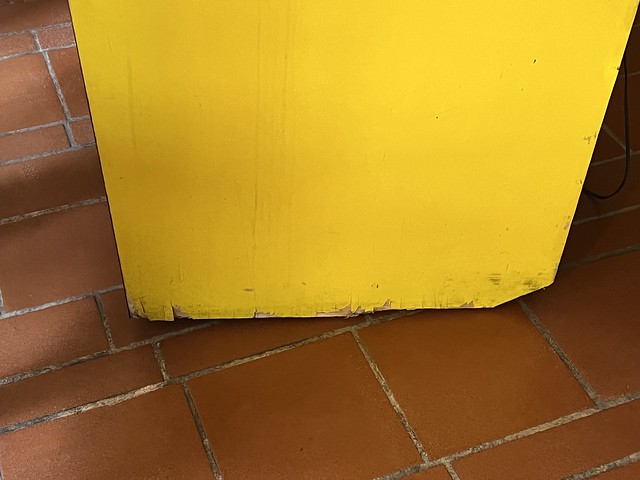 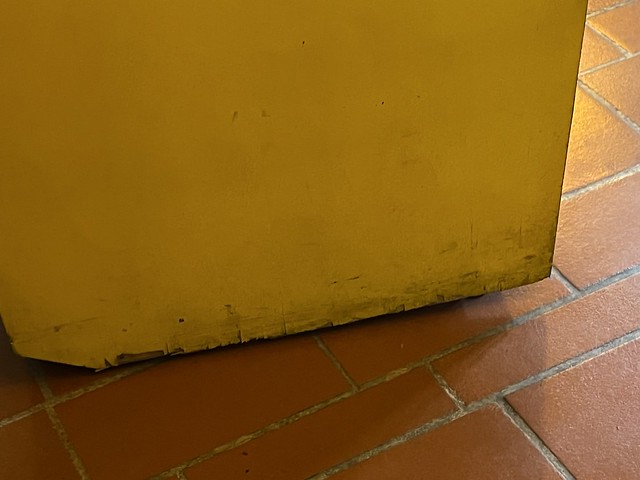 Anyway, the cabinet did have some water damage towards the bottom, similar to my  Scramble project but far less extensive. I stripped the cabinet of all its internal parts, control panel, coin door, marquee, etc. so that all was left was the bones so that Alberto could take it and do his woodworking magic. I documented all the parts removed and various connections so I would remember how to put it back together, although for this one I really didn’t need the photos because the game board and power supply are all housed together in a drawer at the bottom of the cabinet. 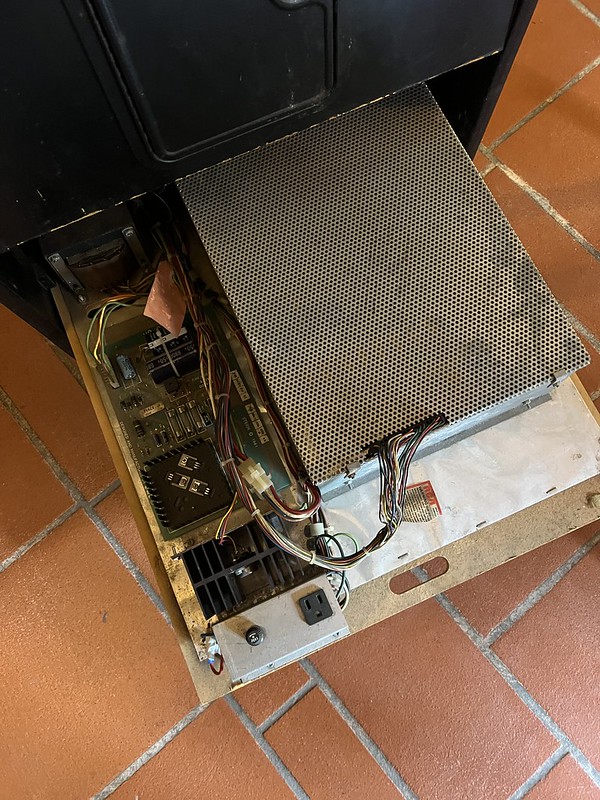 The Flickr album with all the photos I took of each of the various Bagman parts removed and the various connectors might be useful should someone out there find themselves trying to so something similar. 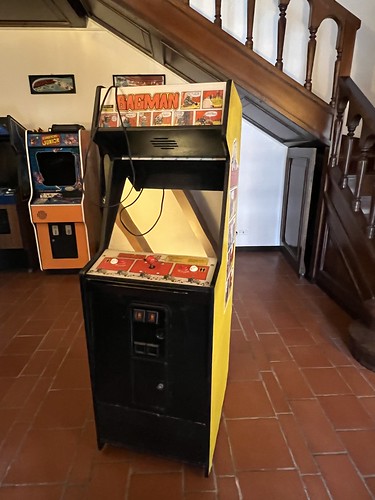 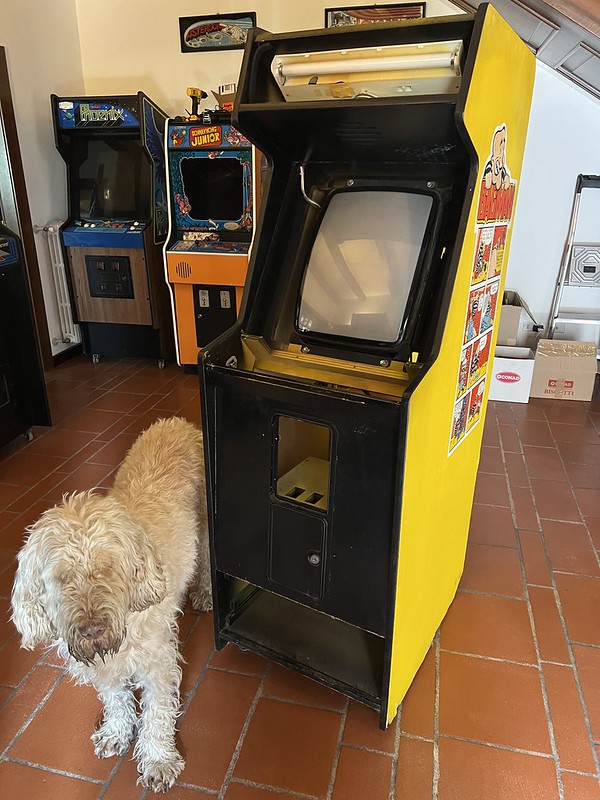 And after removing the marquee light and monitor the game was out the door. I got it back a couple of weeks later and had previously matched the yellow at a local paint store. 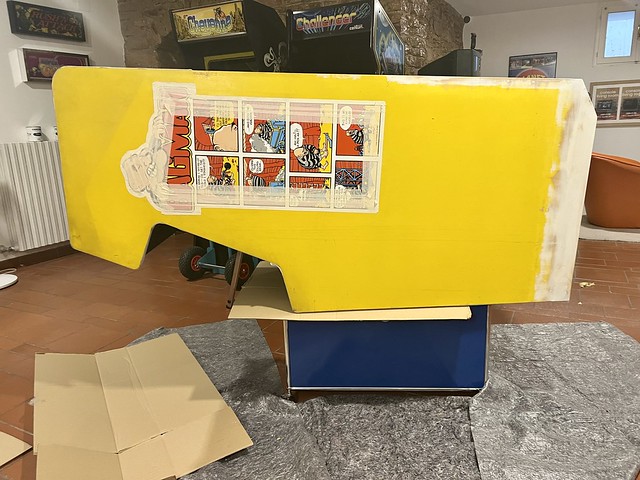 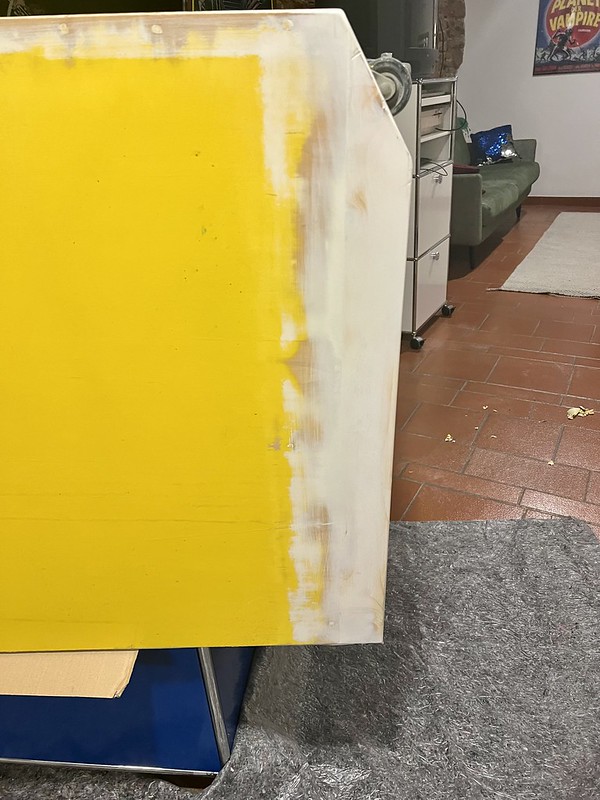 Alberto not only cut out the water damage and replaced the base, he also added some really elegant hidden wheels to the bottom of Bagman that lift the game about a quarter inch off the floor. You would never know the game is on wheels, but castors like this definitely make moving the game around the basement a lot easier. The wheels are not lockable, but I find the game remains stable when leaned against and only moves when pushed with some force. That said, I do think keeping a game with these wheels flush against a wall would avoid any possible issues. I liked them so much I had the same wheels added to the Donkey Kong Jr cabinet, but more on that in the next post. 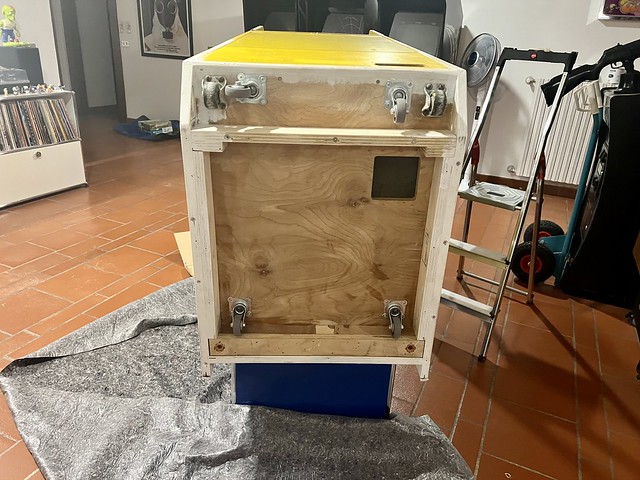 You can see the original wheels for tilting the game back to move it are still there, but having castors for moving the games around is really the way to go with a home arcade: 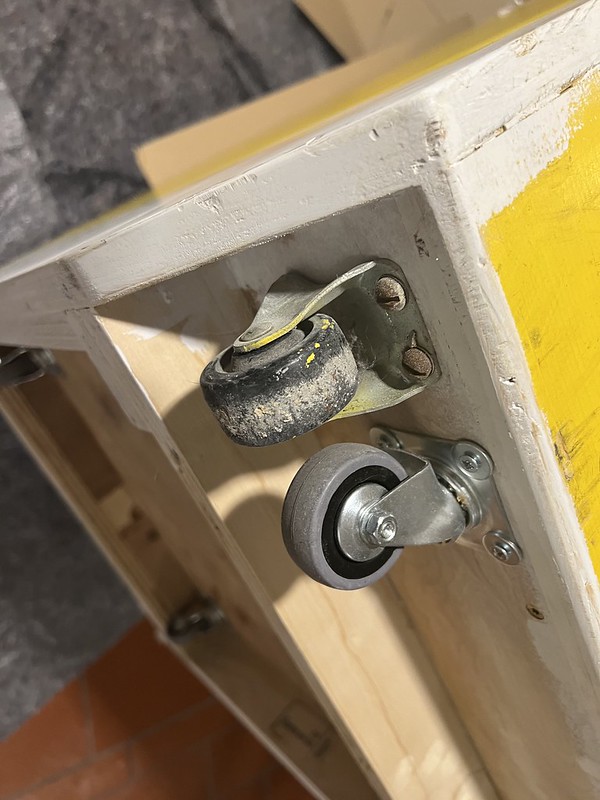 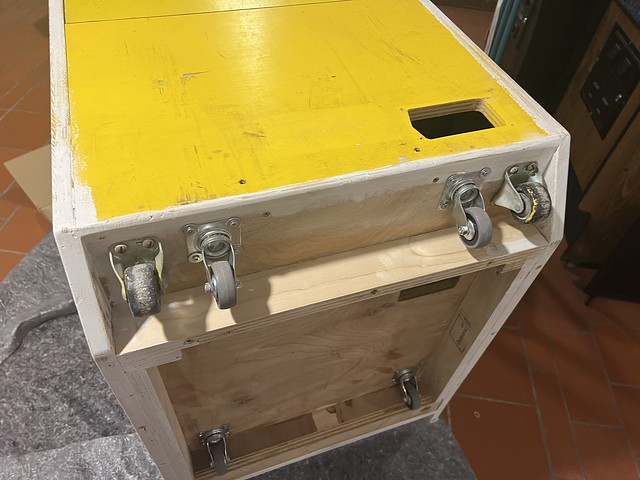 After covering the Bagman side art and the existing T-molding with masking tape, I gave the cabinet a clean coat of yellow paint on the sides and back, and touched up the black on the front panel. This is my favorite part because it’s really the only thing I can do 🙂 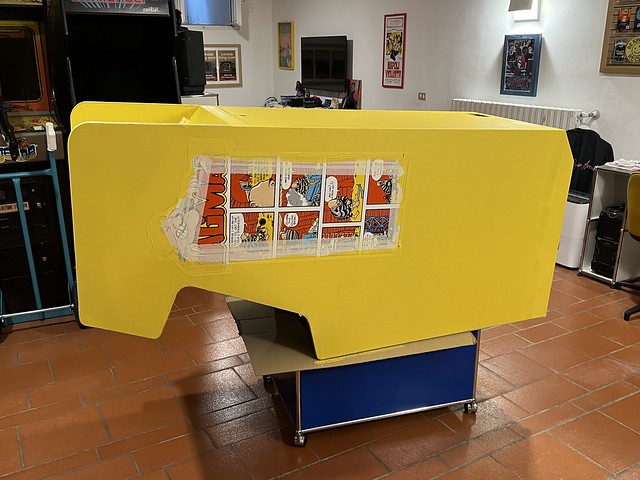 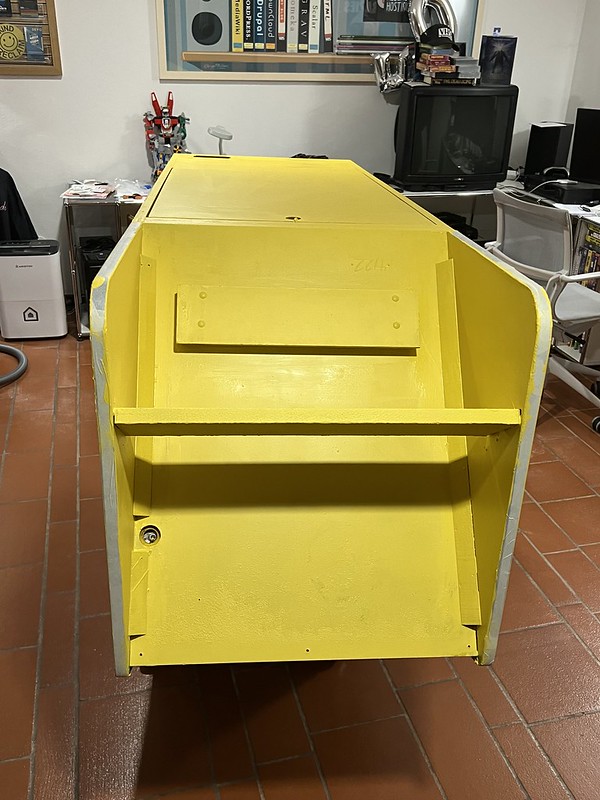 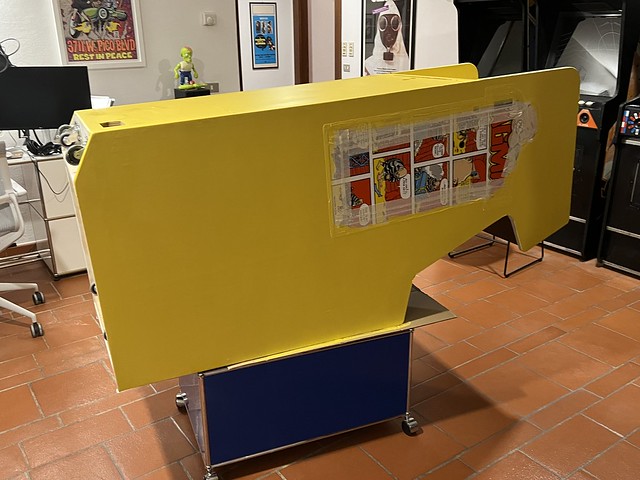 And once I did a few coats and made everything beautiful it was time to rebuild: 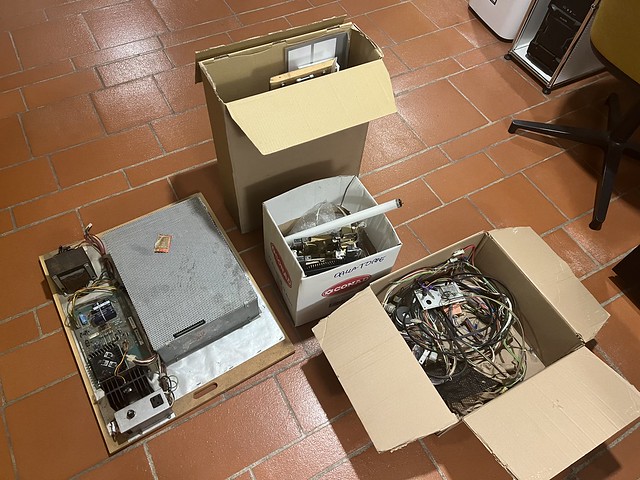 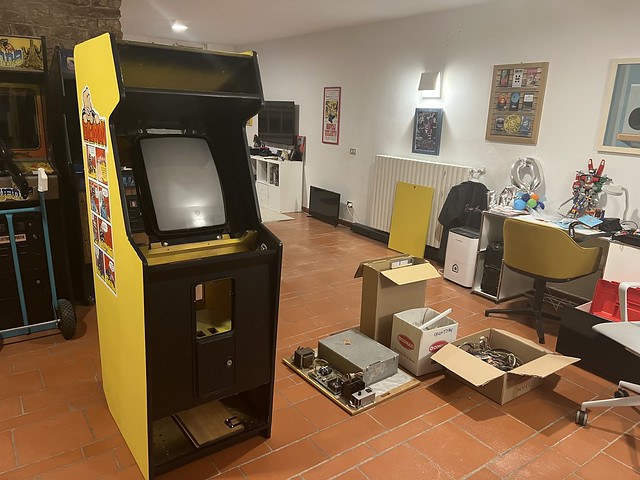 Again, it went quite quickly and I was left with a gorgeous specimen! I love the monitor on this machine, it is running a spiffy G07.

And with that I have bagged the Bagman cabinet, and it is looking brand spanking new!

This entry was posted in bavacade, video games and tagged bagman, bavacade. Bookmark the permalink.

1 Response to Bagging the Bagman