bava.tv brought to you by PeerTube

I recently said something along the lines of….

The nice part about a ds106.tv, as Tim reminds me, is there are no copyright trolls. Small can be very good for a video community. Plus, I have already spent my time dealing with the Youtube copyright crap, and I have no interest to go back there. Everything I have on Vimeo is backed-up locally (and remotely); I basically have my bug-out bag by the door ready to go at anytime. If they delete my videos, it would just mean finding another home for them, and maybe that is exactly what we’ll do with ds106tv  ?

And that is exactly what Tim did when he got the open-source video platform PeerTube up and running for ds106.tv. I took one look at it and immediately knew it was the alternative I’ve been looking for for some time now. What’s more, you gotta love their motto:

Our aim is not to replace them [YouTube, Vimeo, etc.], but rather to simultaneously offer something else, with different values.

One of the coolest things about PeerTube, other than it being free and open, is it’s premised on a decentralized, federated network of a variety of instances (not unlike Mastodon). So, for example, I can federate my own instance, bava.tv, with ds106.tv and folks who come to either can explore what’s on both. Even better, there’s the ability to provide redundancy so we can back-up each others videos in the event of server issues, take-downs, etc. It’s everything ad-revenue and premium video sharing services are not.

Youtube-dl is a legitimate tool with a world of a lawful uses. Demanding its removal from Github is a disappointing and counterproductive move by the RIAA. https://t.co/VUbTokd4cP

But it gets better, it also has the youtube-dl open source python library built-in so that you can migrate your videos off services like YouTube and Vimeo. But as the above Tweet from the Electronic Frontier Foundation makes clear, the youtube-dl code is currently under attack by the MPAA and RIAA for enabling copyright circumvention. In fact, trying to takedown open source code is an already established tactic, back in May the MPA did the same thing to the open source software Popcorn (a Netflix clone). But in that case the developers of Popcorn appealed to Github to re-instate their repo:

The developers submitted a DMCA counternotice explaining that the MPA’s request is not legitimate. The code is owned by Popcorn Time, not the MPA, and Popcorn Time asked GitHub to restore access.

“The code is 100 % ours and do not contain any copyright [sic] material please check again,” the developer wrote.

The app’s developers made a good point here. The identified code (not the built app) is not directly copyright infringing and it contains no direct links to copyright-infringing material either. This means that a DMCA notice may not be the right tool here.

Faced with both requests, GitHub has now decided to restore full access to the Popcorn Time repository.

Let’s hope youtube-dl gets as lucky as Popcorn did back in May, but at the same time you begin to understand that in many ways Github is just as arbitrary and liable as Youtube to remove and block access to our culture, this in the form of code, based on power plays by monied interests. It’s the same mistake of consolidating resources, and by extension power, in the hands of a few monolithic sites (rather than federated across many) that gets us back in the hole.

In fact, the Youtube-dl makes archiving videos you want to save from around the web unbelievably convenient for copying videos in seconds. 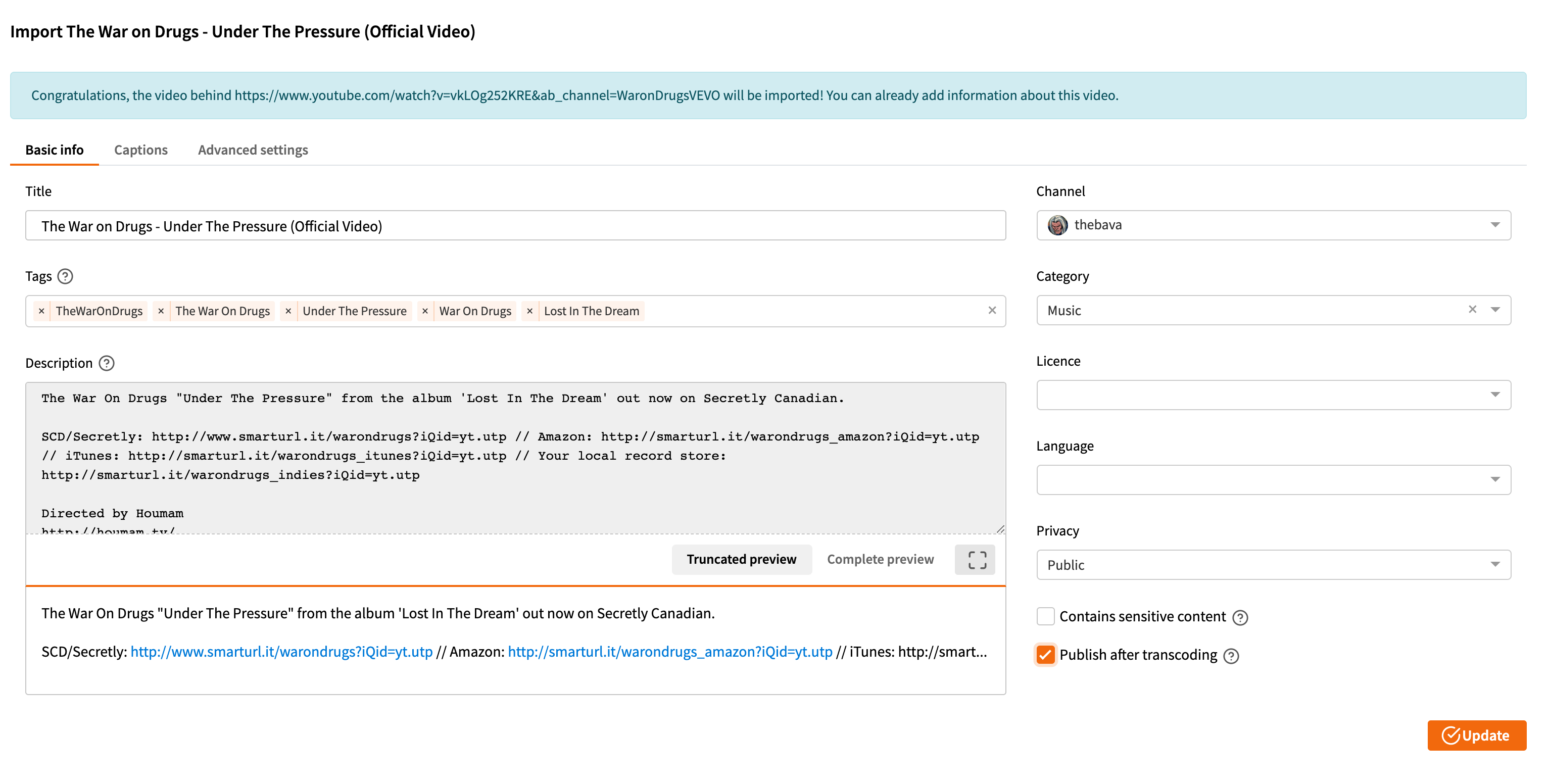 It”s been over 8 years since I lost all my videos on YouTube thanks to copyright claims and the unilateral arbitration at the hands of for-profit platforms, so it is nice to finally have a really tight alternative. I have been playing with it for over a week given I wanted to make sure the Docker installation works on Reclaim Cloud (it does!), along with the CLI tools that make migrating an entire Vimeo or YouTube channel to PeerTube absolutely painless. I did this yesterday and brought over over 275 videos, and all the accompanying metadata—so good. 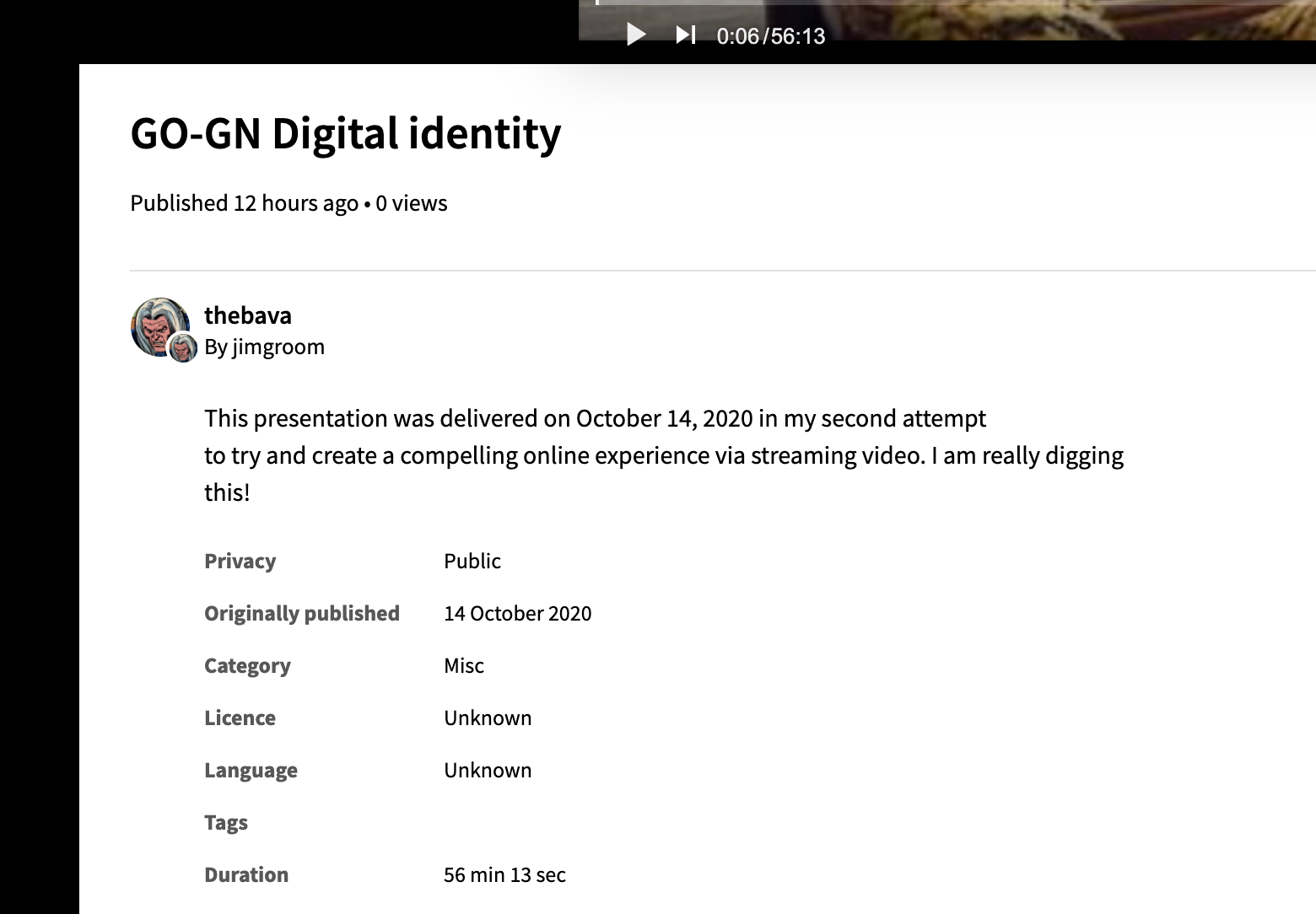 I think the thing I appreciate the most about PeerTube is the way it lets you explore your own and others videos. Tim has been uploading all of his videos to ds106.tv and we are working on federating my site with his (it is actually simple to federate instances, but I deleted my previous instance so there have been some caching issues) and I have been able to discover so many of the old gold DTLT Today episodes, not to mention ds106 gold, and more. 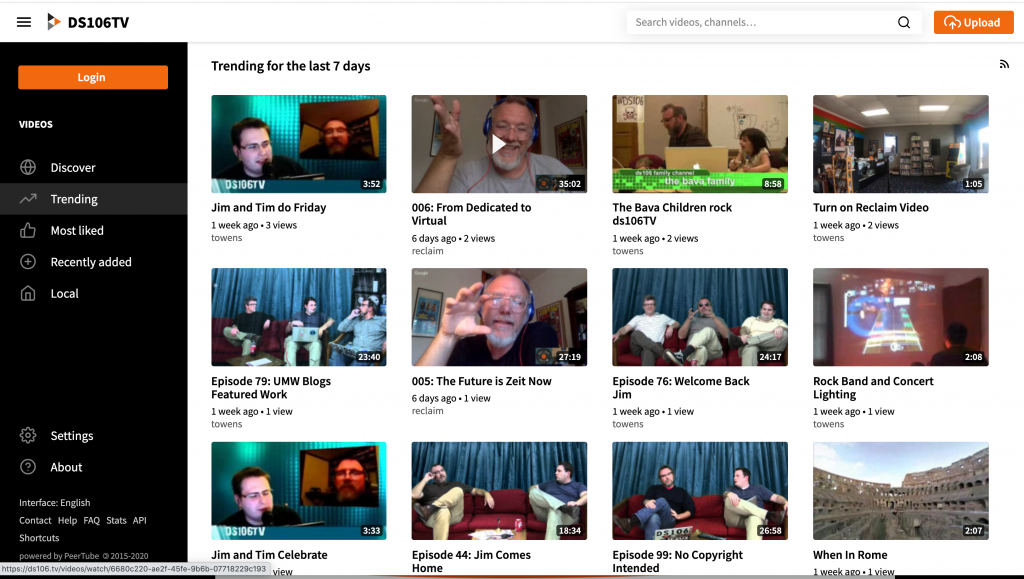 I think the larger plan is to give people account on ds106.tv to upload videos for the ds206.video course we are designing, or even better, help them spin up their own PeerTube instance to see what its all about. To that end I need to work on a one-click install for PeerTube on Reclaim Cloud, which should be very doable, as well as a more in-depth how-to for the peerTube CLI given wrapping your head around that really makes this tool amazing for migrating a large amount of content in a short period of time. ds206.video is already paying dividends and it is still months away from starting. #4life

2 Responses to bava.tv brought to you by PeerTube