There is no better feeling than when some of your plodding experimentation starts to come together after several months of work. 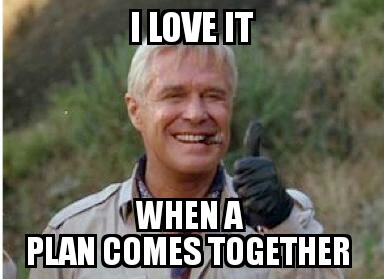 Yesterday I had the distinct pleasure of presenting to the GO-GN network about digital identity. I asked Martin Weller and Beck Pitt if I could experiment a bit for this talk with some various video shots via OBS, and they were more than willing to let me run wild. In fact, they were even accommodating 🙂 They gave me a test account for their video conferencing application, ClickMeeting, which quite frankly was one of the best I’ve used yet.* I did a preliminary run at this setup with my “5 Questions about EDUPUNK” video last weekend that  I posted about earlier this week. The primary difference was that this was in front of a real-time audience and if I messed up there were no do-overs. Dear reader, I nailed it!

My discussion of digital identity might be broken up into two parts: 1) I play the hits and talk about my blog, narrating your work, and the now venerable ds106, but part 2) was a bit of a departure wherein I discussed the possibilities of streaming video for new ways of building and imagining presence. I was lucky that both Meredith Fierro and Katie Hartraft did the heavy lifting by modeling Tik Tok-style narratives and being far more insightful and thoughtful than I could ever be! It was a lot of fun for me, and I was more nervous about this presentation than I had been about one in a long while, which for me is always a good sign I am stepping out of my lane and trying something new. For me the form was the message, I was spending 45 minutes presenting my story via dynamic, streaming video. It wasn’t The Wire or anything, but it was mine in ways the typical video conferencing video box never could be. I didn’t stream it to ds106.tv out of respect for the GO-GN network, given they invited me to their space, so no need to push folks elsewhere, but I could have quite easily. What’s more, I could record a hi-quality version of the video I can then use for my own purposes. Something like this….

One drawback of this version of the talk is that I didn’t capture the ongoing chat (though I could have), and I didn’t capture the audio questions Martin asked towards the end. I edited the above video to account for that, but GO-GN has the more complete version up on their Youtube account, embedded below:

Now riddle me this, which is the official document? Textual historians are gonna be working overtime for the next few centuries 🙂 A couple of interesting notes about the version on Youtube is that with it came copyright claims that made monetizing it impossible. Fine by GO-GN and me, but it does get to an issue that came up in the talk regarding the lack of de-commodified green spaces for video on the web . The nice part about a ds106.tv, as Tim reminds me, is there are no copyright trolls. Small can be very good for a video community. Plus, I have already spent my time dealing with the Youtube copyright crap, and I have no interest to go back there. Everything I have on Vimeo is backed-up locally (and remotely); I basically have my bug-out bag by the door ready to go at anytime. If they delete my videos, it would just mean finding another home for them, and maybe that is exactly what we’ll do with ds106tv  🙂

Anyway, I am getting off topic here, this entire process has gotten me even more excited about working with Tim and Andy Rush on a special topics ds206† course, namely #ds206video. And while we still have to iron out a bunch of details, I did mention this development in the above video, and Andy and Tim are officially on-board. It will be a multi-week open course around working with OBS, streaming video servers, hardware, video editing software, etc. with the idea of helping interested folks bolster their video game. I’ll hopefully have a lot more to say and blog about this anon. But for now let me try and document what I did for the “Like <3 and Subscribe to Your Digital !dentity in the Time of Corona” presentation.

In fact, it was quite similar to the process I blogged about for the EDUPUNK Q&A, so I will try and keep this a bit briefer with the understanding you can refer back to my previous post for details (at some point I’ll try and come up with a more cogent tutorial).

Like with the EDPUNK Q&A I had 3 main scenes: 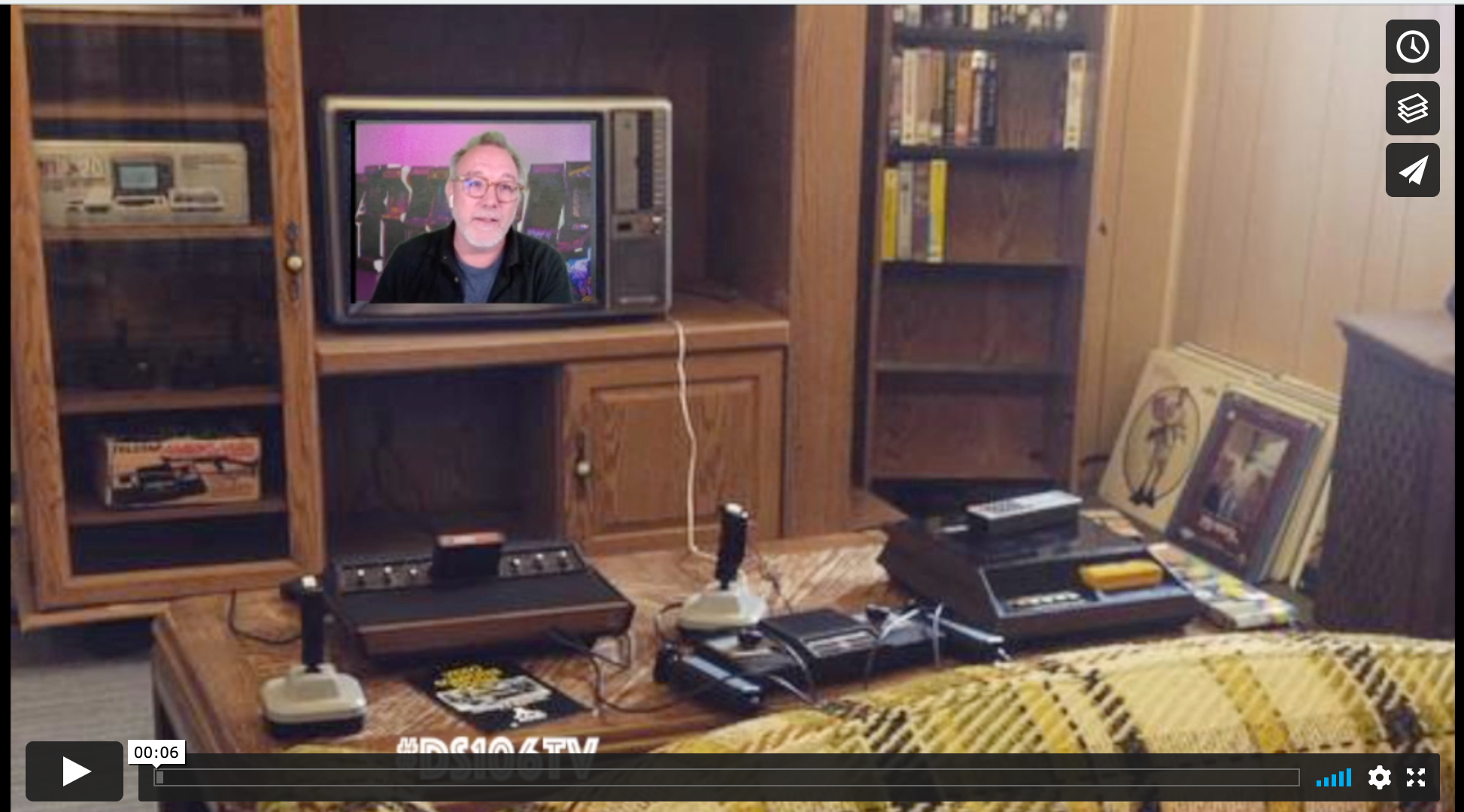 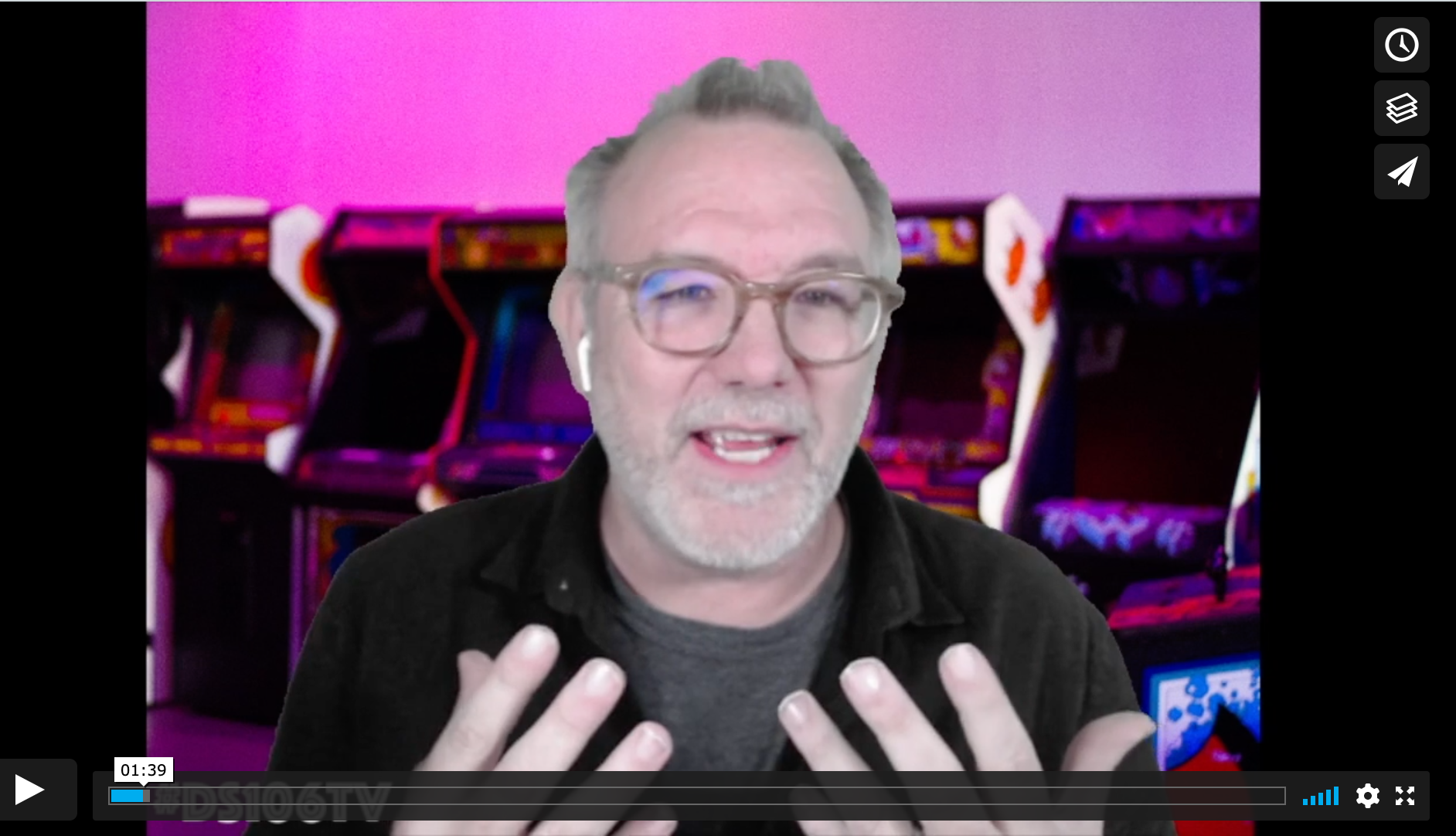 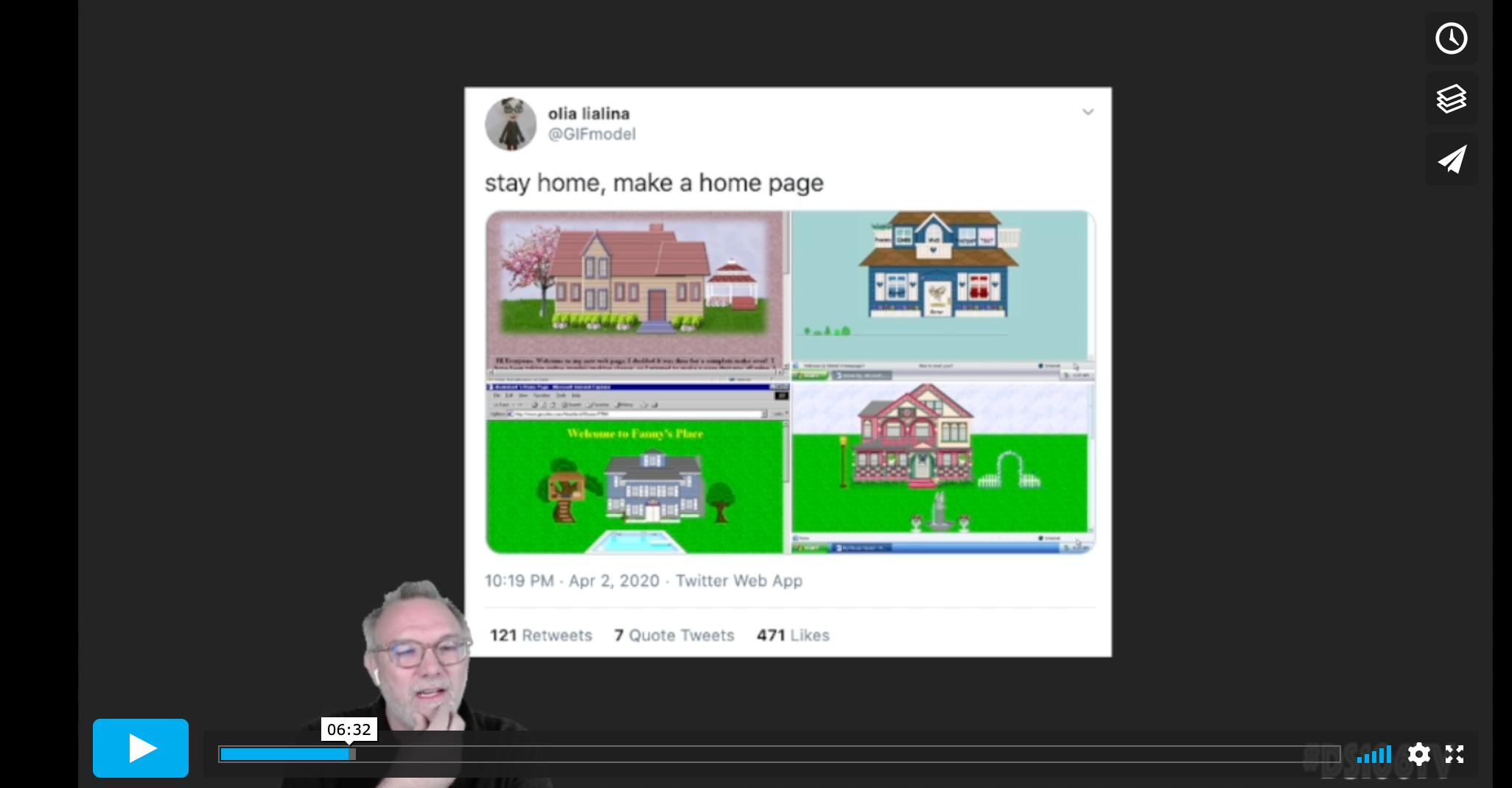 Each of these scenes is composed of pretty much the same inputs/shots as the OBS screenshots in the EDUPUNK Q&A post. Only difference is I deigned to change my shirt, or at least the unbuttoned button-up. What’s more, I added five video shots this time versus the four I used in the EDUPUNK video. Katie and Meredith’s Tik Tok videos were Media Source inputs of a video file I had in a folder on my desktop. Nothing else special, other than making sure in Advanced Audio Preferences for the videos I could monitor to hear it as well as the audience (see “Brian on Crack” example in EDUPUNK Q&A post). For the Buggles’s “Video Killed the Radio Star” video I included my webcam in that shot so I could be goofy and sing/dance along. This was as easy as adding another video capture device, my webcam, but I made sure there was no audio for me on this. 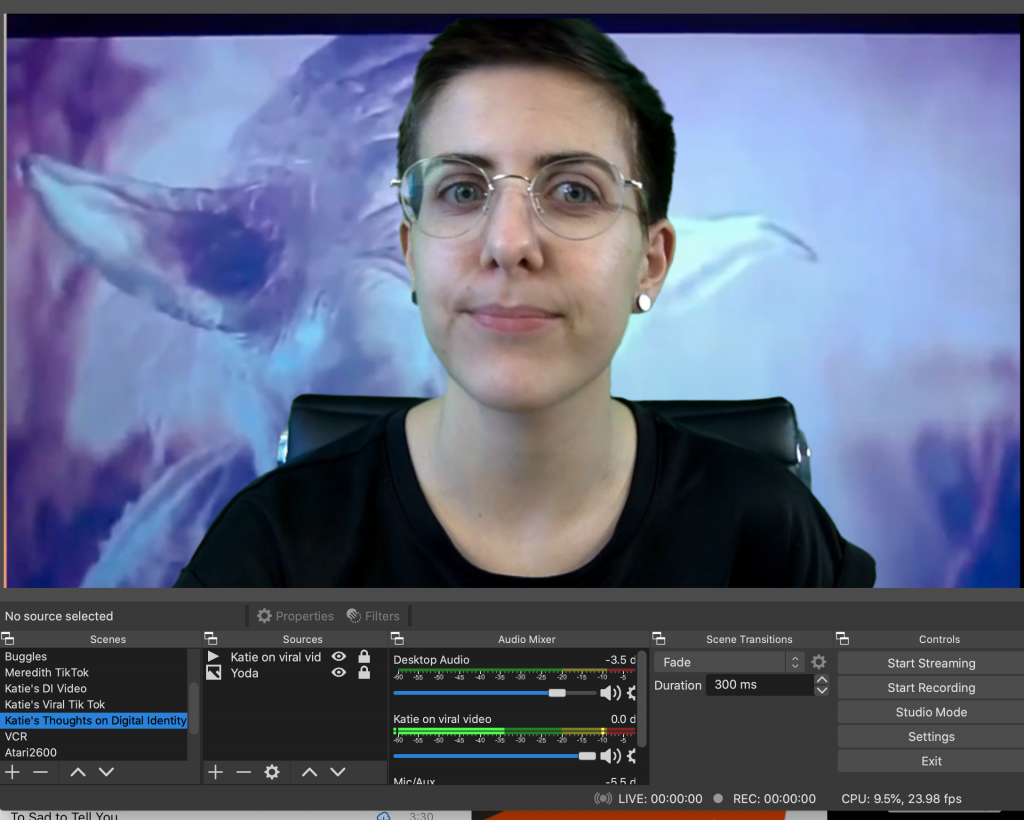 The coolest bit was Katie filmed her 2 minutes discussion of her story around her viral Star Wars Tik Tok against a green screen, so I could add the Yoda image cleanly behind her using the Chroma key in Filters for her video. That was a new process, and remarkably easy in OBS. 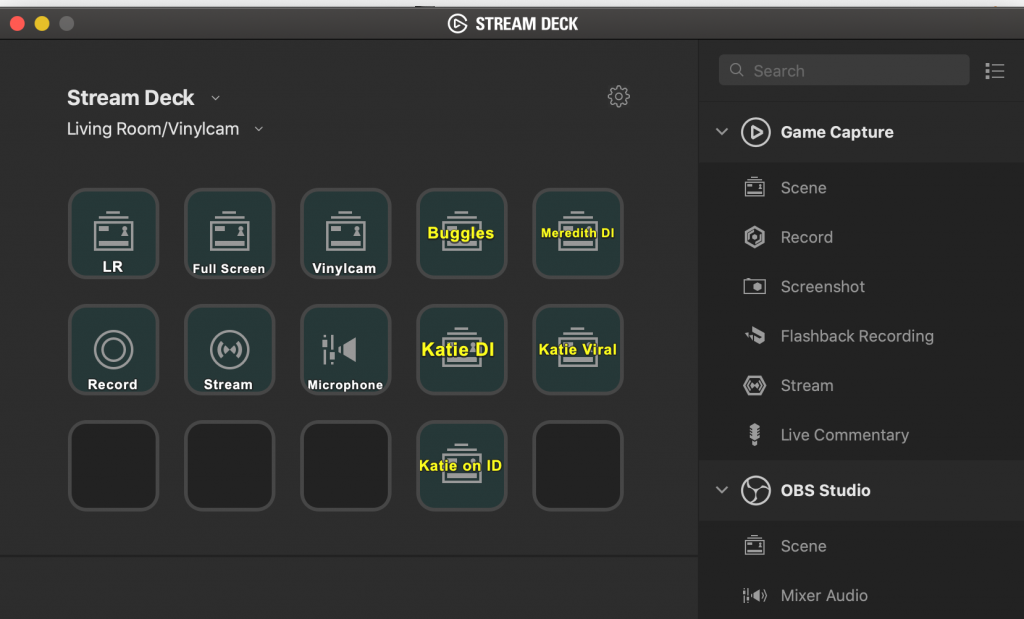 Finally I mapped my Stream Deck with the 3 primary scenes: LR (console living room), Full Screen (Reclaim Arcade shot), and Vinylcam (which is actually the presentation mode). The other five video scenes are in yellow and I order them to my liking, but can also label them to make sense for me.

The last bit which is different from the EDUPUNK Q&A video was I used the OBS Virtual Camera plugin for the Mac, it has been around for a while for Windows but a new development for Mac this Spring. This plugin let’s me choose everything I output from OBS as a camera input for an application like ClickMeeting or Zoom or any other video conferencing tool that supports it (this is why I needed to test ClickMeeting well in advance). It is super slick. When I chose the OBS Virtual Cam as my camera for ClickMeeting everyone can see my OBS app as the output. That worked brilliantly.

In fact, I tested everything again that morning so that by 2:30 PM when I was ready to test in the room I was sure everything worked—did I tell you I was nervous? Well, while the virtual video output was fine I had a bit of a scare when Paco, who was awesome, let me know the audio from the videos was not coming through. Oh no! I was racking my brain until I remembered I needed to use the virtual audio output from the Loopback application I use to mix sound together from various applications. Once I switched my audio from just my mic to the virtual sound output I named OBS Audio I was cooking with gas with only 5 minutes to spare, whew! After that, it was show time and I am pretty stoked we could pull it all off! Let me know if you need some comedy relief at your next online event 🙂

*The big test ClickMeeting passed with flying colors was working with the OBS Virtual Camera plugin, but more on that in the post above.

†A few years ago Alan Levine and I toyed with the idea of doing a ds206 course (http://ds206.life) wherein we started thinking more intensely about various aspects of managing your digital identity and resulting work online. I think the idea of doing it as a course through a university (which was on the table at the time) was a bit more than either of us wanted to commit to given other demands, so we shelved it.