I spent a few industrious days back in Fredericksburg. For all the smack I talk on the burg, it was good to be back. I got to spend some quality time with Tim talking Reclaim Hosting and more. I also got to meet up with some UMW folks like Mark Snyder, Zach Whalen, Jon Pineda, Becky Brown, Jeremy LaRochelle, and Garrett Bush. I was pleasantly reminded how many good people I’ve gotten to know over the years.

I haven’t been gone from Fredericksburg or UMW for long enough for a return to be of any real concern, but I did have some business to attend to. I needed to do some work on casa bava, which has been on the market for a few months now. I ran out the door in early October for Italy (minus one cat), and I left a few loose-ends unattended in my haste. I took a few days to clean the house, boxing up some more stuff, fix the kitchen faucet, repair the basement sink, and collect some stuff we left behind. But probably the most important piece of business I needed to attend to was retrieving all the stuff I contributed to the Console Living Room exhibit that ran for the last nine months at UMW.

The Console Living Room at UMW

I got an email a few weeks back from Zach letting me know that the exhibit was finally being retired. I was a bit sad, but at the same time I took solace in the fact that it’s being ephemeral may make it that much more powerful in the collective imagination of many, many generations to come. [Like it or not, this is how I think.] What’s more, it was only supposed to last two months max, but it resonated with folks and ran for a solid 9 months. Upon hearing it was over, I was eager to try and save all the things I bought for the exhibit, such as a refurbished betamax player, a Panasonic VCR, a component stereo system and speakers,  at least two TVs, two Atari 2600s, several game cartridges, tons of VHS and beta tapes, albums, cassettes, comics, games, books, and more. It was a treasure trove of stuff for me, and a part of me felt sick thinking I might never see it all again. Zach agreed to take some time out of his weekend and meet me at UMW to deal with the aftermath. 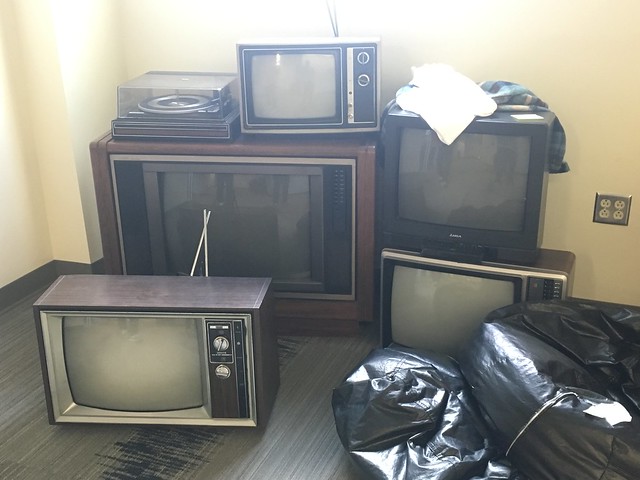 There wasn’t much left of the actual exhibit. Pretty much all the furniture was gone, and in it’s place was five TVs and a record player piled up in the corner. It looked like a Nam June Paik art installation. Zach had put all the actual media in a storage closet, so we spent an hour or so sorting it out and boxing it up for me to take home. 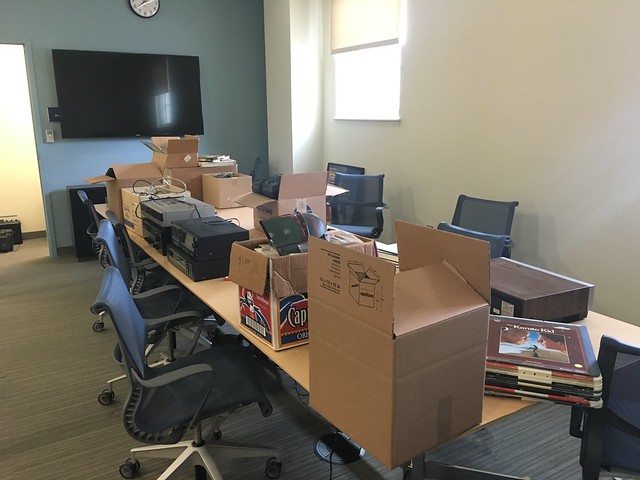 There was a lot of stuff, in fact a table full, and we made short work of splitting it up and accounting for who loaned us what, etc. It was kinda of nice to sit around with Zach for part of an afternoon and reflect on the exhibit, enjoy how cool it was, and bring some closure to the whole thing. It meant a lot to both of us, and it was one of the coolest projects I have ever been a part of at UMW. The planning process last Spring was pretty much two months of unadulterated fun imagining, shopping, and then building out the living room. And if that wasn’t enjoyable enough, the great reward of watching so many others from around campus enjoy it in real time through a shared physical space sealed it. So, we wrapped it up and brought everything back to my house that is currently for sale. 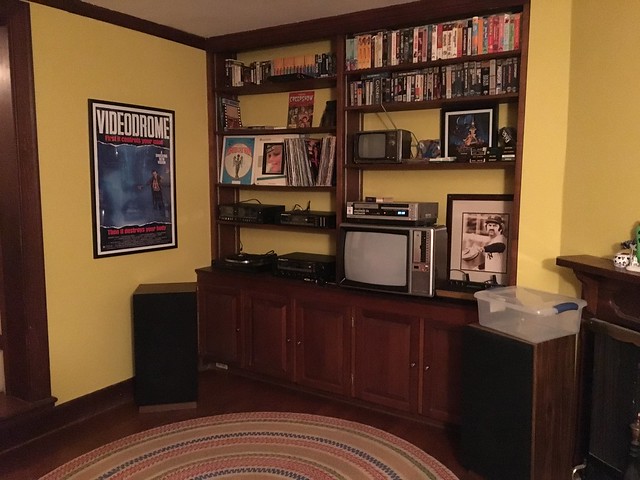 But rather than keeping it packed up, I got the urge that night to actually set the exhibit up again in my den. Completely irrational, I know. I won’t even really be able to enjoy it but for more than a few days, but I couldn’t help myself. I spent the better part of the next morning transforming my den into a 1980s console living room, which I am affectionately calling #bavaconsole. I came back to Freddy to pack up and pare down, but instead I accumulated and unpacked even more junk. For the record, no one can ever accuse me of being practical. That said, it makes me very, very happy knowing it is there, and that’s all that matters.

This entry was posted in Console Living Room and tagged bavaconsole, umwconsole. Bookmark the permalink.