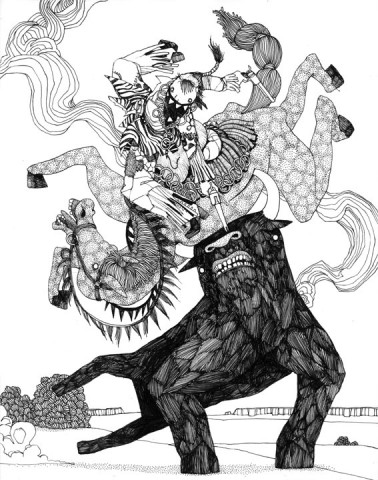 224:”…the bull had planted its feet and lifted the animal rider and all clear off the ground…”
Image source: “Six versions of Blood Meridian”

I’ve been reading and re-reading Cormac McCarthy’s Blood Meridian most of the Summer, and I don’t think I’ve come across a more violent, insane book yet. I guess I would have to re-read Marqués de Sade to say this with certainty, but outside of that-wow—what kind of mind dreams up The Judge? I’m still struggling with what the quote by Michael Herr on the Vintage edition cover claims as the novel’s overarching theme: “regeneration through violence.” I’m not sure if this is just a tagline on the book to make up for the horror within it, or if someone has argued this through thoroughly. I’ll scour around for more. I must admit it was an amazing novel, and I loved reading it, but at the same time I was all the while deeply repulsed by it. It was as if the reading of it scarred me—took something vital away from me with every blood drenched sentence. In fact it haunts me like No Country for Old Men haunted me. I’m still searching for a another way into it besides the innumerable bullet holes. But in a way that’s fine, it will keep me both honest and reading.

So, before I say goodbye to this book for a while, one which I’ve kept on my person most of the Summer, I want to pull out a few quotes I found myself underlining, dog-earring, or otherwise searching for a pen-less means to archive along the way. Also, as a quick note, the Six Versions of Blood Meridian is a pretty cool project I discovered through EscapeGrace, which features six artists illustrating their quotes of choice (one of which you can see at the top of this post along with the quote).

Books lie, he said.
God don’t lie
No, said the judge. He does not. And these are his words.
He held up a chunk of rock.
He speaks in stones and trees, the bones of things.
The squatters in their rags nodded among themselves and were soon reckoning him correct, this man of learning, in all his speculations, and this the judge encouraged until they were right proselytes of the new order whereupon he laughed at them for fools. (116)

And so these parties divided upon the midnight plain, each passing back the way the other had come, pursuing as all travelers must inversions without end upon other men’s jounreys. (121)

For it is the death of the father to which the son is entitled and to which he is heir, more so than his goods. (145)

So what is the way of raising a child?
At a young age, said the judge, they should be put in a pit with wild dogs. (146)

If God meant to interfere with the degeneracy of mankind would he not have done so by now? (146)

This you see here, these ruins wondered at by tribes of savages, do you not think that this will be again? Aye. And again. With other people, with other sons. (147)

All about her the dead lay with their peeled skulls like polyps bluely wet or luminescent melons cooling on some mesa of the moon. In the days to come the frail black rebuses of blood in those sands would crack and break and drift away so that in the circuit of a few suns all trace of the destruction of these people would be erased. (174)

They entered the city haggard and filthy and reeking with the blood of the citizenry for whose protection they had contracted. (185)

He’d filled his pockets with little candy deathsheads and he sat by the door and offered these to children passing on the walk under the eaves but they shied away like little horses. (191)

What’s a suzerain?
A keeper. A keeper or overlord.
Why not say keeper then?
Because he is a special kind of keeper. A suzerain rules even where there are other rulers. His authority countermands local judgements. (198)

The good book says that he that lives by the sword shall die by the sword, said the black.
The judge smiled, his face shining with grease. What right man would have it any other way? he said. (248)

Men are born for games. Nothing else. Every child knows that play is nobler than work. He knows too that the worth or merit of a game is not inherent in the game itself but rather in the value of that which is ut at hazard. Games of chance require a wager to have meaning at all. Games of sport require the skill and strength of the opponents and the humiliation of defeat and the pride of victory are in themselves sufficient stake because they inhere in the worth of the principals and define them. But trial of chance or trial of worth all games aspire to the condition of war for here that which is wagered swallows up game, player, all. (249)

Moral law is an invention of mankind for the disenfranchisement of the powerful in favor of the weak. Historical law subverts it at every turn. (250)

Men of god and men of war have strange affinities. (250)

What is death if not an agency? And whom does he intend towards? (329)

There is room on the stage for one beast and one alone. All others are destined for a night that is eternal and without name. One by one they will step down into the darkness before the footlamps. Bears that dance, bears that don’t. (331)

Towering over them all is the judge and he is naked and bowing, his small feet lively and quick and now in doubletime and bowing to the ladies, huge and pale and hairless, like an enormous infant. He never sleeps, he says. He says he’ll never die. (335)

All page numbers above come refer to this edition of the novel.

8 Responses to Blood Meridian: Some Quotes