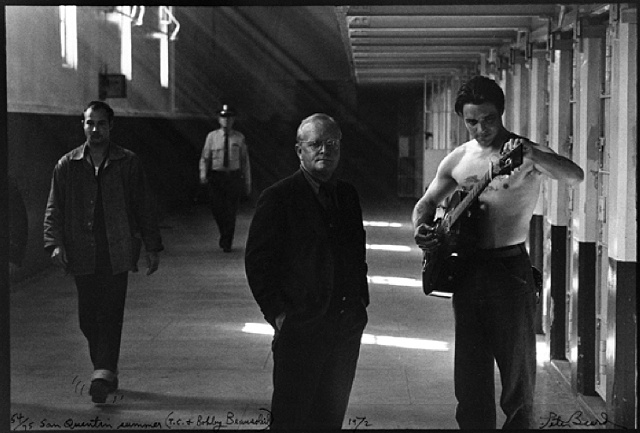 As my last post made all too clear, this week in True Crime we’re talking about the 1976 TV movie Helter Skelter. Last night, as a follow-up to the discussion of the film, we discussed the interview between Truman Capote and Bobby Beausoleil published in 1973 as “Then it All Came Down.” Capote went to San Quentin in 1972 to talk with Beausoliel who was (and still is) serving life in prison for killing Gary Hinman—the first of the Manson murders. What’s fascianting to me about this conversation is that it suggests Vincent Bugliosi’s Helter Skelter scenario argued during the Manson trial, namely that the various murders were committed to spark a global race war, is overstated.

Instead, the Sharon Tate and LaBianca murders were actually attempts to free the charismatic and handsome Beausoleil from prison. In fact, Capote lays this theory out pretty clearly in the preface to the published interview:

It all began with the murder of Gary Hinman, a middle-aged professional musician who had befriended various members of the Manson brethren and who, unfortunately for him, lived alone in a small isolated house in Topanga Can­yon, Los Angeles County. Hinman had been tied up and tortured for several days (among other indignities, one of his ears had been severed) before his throat had been mercifully and lastingly slashed. When Hinman’s body, bloated and abuzz with August flies, was discovered, police found bloody graffiti on the walls of his modest house (“Death to Pigs!”) ­graffiti similar to the sort soon to be found in the households of Miss Tate and Mr. and Mrs. LaBianca.

However, just a few days prior to the Tate-LaBianca slayings, Robert Beausoleil, caught driving a car that had been the property of the victim, was under arrest and in jail, accused of having murdered the helpless Mr. Hinman. It was then that Manson and his chums, in the hopes of freeing Beausoleil, conceived the notion of committing a series of homicides similar to the Hinman affair; if Beausoleil was still incarcerated at the time of these killings, then how could he be guilty of the Hinman atrocity? Or so the Manson brood reasoned. That is to say, it was out of devotion to “Bobby” Beausoleil that Tex Watson and those cutthroat young ladies, Susan Atkins, Patricia Krenwinkel, Leslie Van Hooten, sallied forth on their satanic errands.

So, after watching the TV movie which spends three hours articulating and celebrating the brilliance of Bugliosi’s elaborate conspiracy theory tying the Manson murders to the Beatles’s song “Helter Skelter,” Capote offers a very logical, condensed version in just two short prefatory paragraphs. Rather than buying into an overblown theory that The White Album was the basis of an impending global racial conflagration, Capote argues Manson and the family had come up with the bloodiest, most horrific way to get Beausoleil out of jail. Still twisted thinking, no doubt, but somehow more believable than the vision of Helter Skelter laid out during the trial. That said, I must admit Bugliosi’s elaborate theory is far more entertaining than Capote’s, and maybe that’s the point.