Building a Gaming PC with Tommy

One of the projects I have been working on with Tommaso since Christmas has been putting together the component pieces Santa brought him to build a bitchin’  gaming PC. You see, with COVID the elves were not assembling PCs given the questionable labor conditions up North, what’s more there’s been a run on graphics cards as a result of those pesky bitcoin mining elves. So this was no simple process. But luckily Tommaso did all the heavy lifting, he researched all the details and we worked together to bail out Santa. We did fairly well out of the gate, but turns out the Motherboard was for an Intel processor (we got an AMD) and the RGB fans we bought were 14cm when they needed to be 12cm. So, there was some returning of merchandise, but luckily Tommy was nothing like me as a child, he actually had patience.

So, here are the specs and costs of our components pieces for the gaming machine, for posterity:

That’s a whopping $2590 for this gaming machine. And roughly 1/3 of that total was the graphics card, which was more expensive than it should’ve been. And I even bought it second-hand because the new ones were almost double the above price. From what I understand there has been a run on graphics cards over the last few months, and folks are gouging consumers with ridiculous prices. Not sure if it is a result of the pandemic and everyone doubling down on streaming and online work/play, but when I saw the prices my jaw dropped. Just a year ago when I was flirting with this project they were in the $400 to $700 range, with the top of the line being closer to $1000, this year everything seems to have shifted up from anywhere from 100 to 200% more. Nuts. 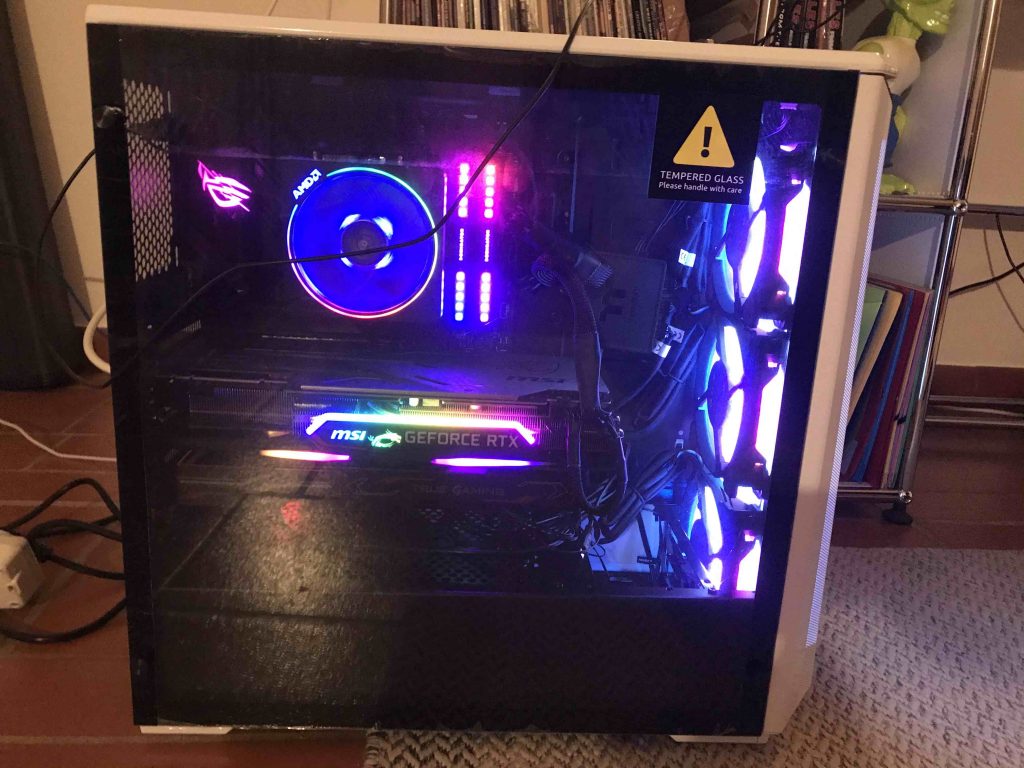 So, We have been slowly putting the gaming machine together after the returned parts came and I finished just in time for him to use it before I headed to the US. I won’t bore you with too many details, but I will say it was super fun to build it together. I think spending the money this time (while painful) is probably a good investment because you realize you can swap up parts and add drives pretty easily, and that will be a lot less expensive over time—or so I tell myself. I was struck that Windows still charges $250 for their operating system, WTF! That’s a cost I could not swallow just yet, we’ll see what the internet has to offer. Tommy was pretty proud given he spec’d everything, and his patience in putting it together was exemplary. I also think he has a finer appreciation of how these machines work as a result of this process, which is pretty cool. 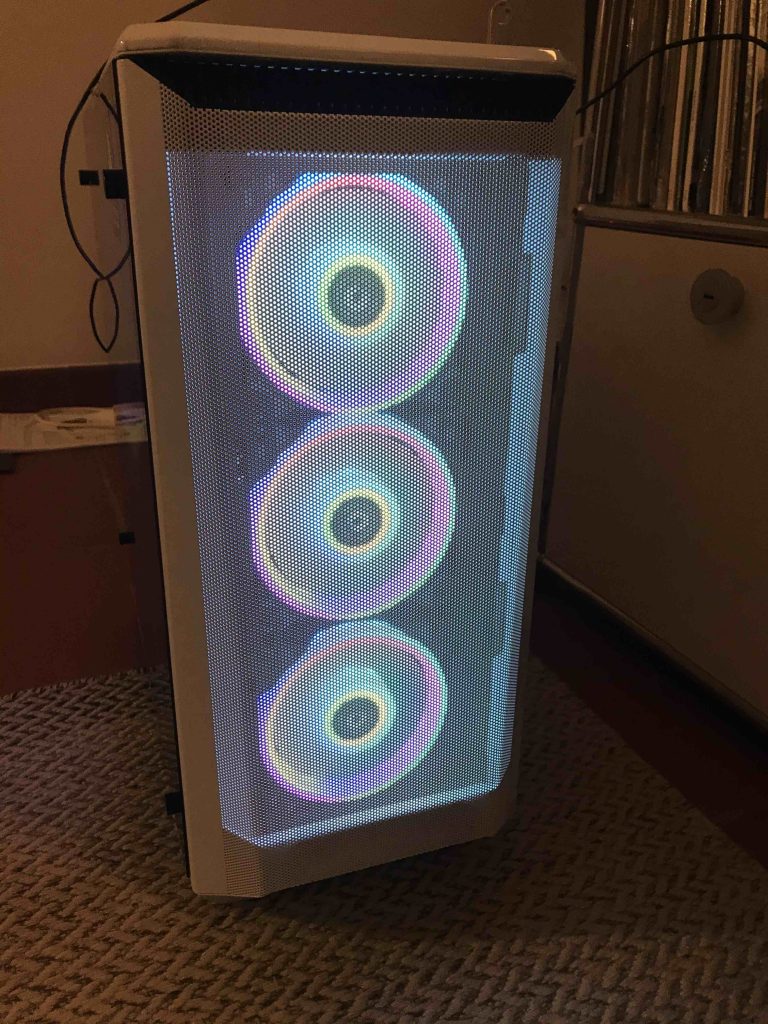 I’ll be honest, going into this project I was a bit nervous about the assembly. I have never built a PC from scratch, so this was a new experience for me. That said, it’s really easy. They make it dead simple to put these machines together now, and there are so many resources to help you every step of the way. It’s like Ikea for gaming machines down to the last details, including wire management, power inputs, and various motherboard inputs. It so smooth that I was sure I messed something up, but lo and behold it worked a treat. 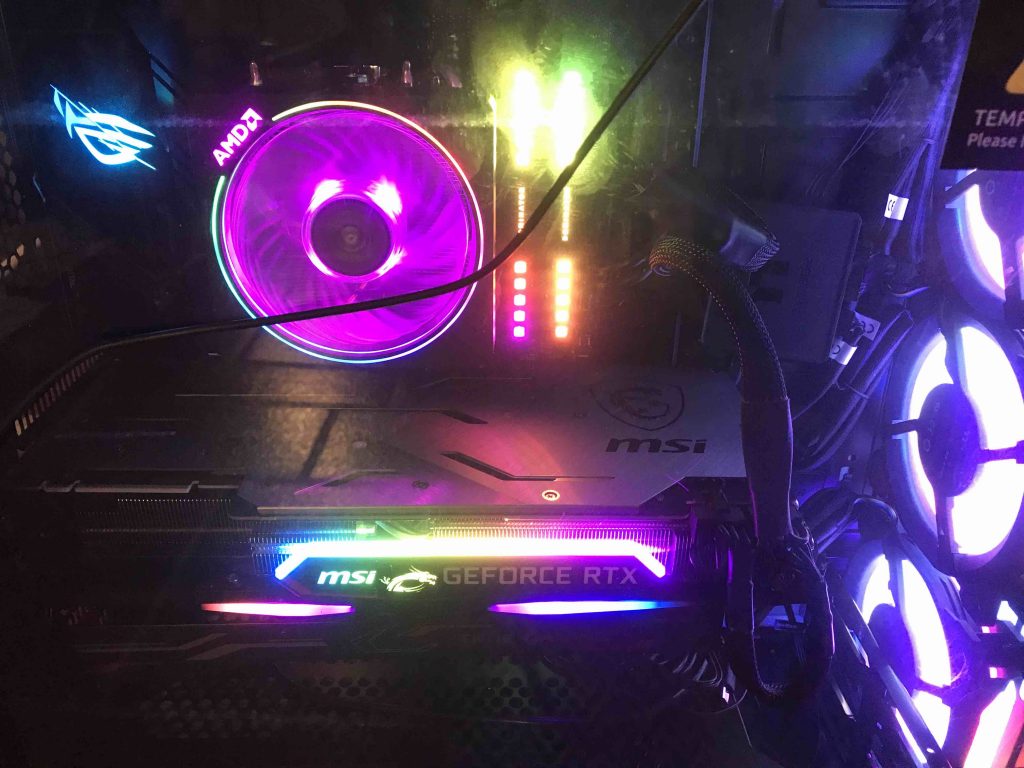 The other cool thing is the RGB culture these machines have spawned. The gaming PC is as much about a cool light show as it is about massive power and ridiculous graphics resolution. Everything on this machine has RGB lights except the power supply, which is hidden at the bottom underneath all the components.

Finally, the hardest part of the build was getting Windows 10 on a USB drive so I could install it. The installer is over 5 GB (almost 6GB), and FAT32 USB drives for Mac’s balk at any files over 5GB. So, I had to use this helpful guide on “How to Create a Windows 10 Bootable USM on Mac” to figure it out. I requires a little terminal kung-fu with rsync (which I am now familiar with) to get the Windows 10 ISO copied to a USB drive so I could install it, and this was the only part of the build Tommy seemed remotely impressed with his dad. It keeps getting harder and harder 🙂

NB: The above video orientation is off given I was not thinking, but I do list all specs and details within a few short minutes.

2 Responses to Building a Gaming PC with Tommy