We recently migrated UNLV’s faculty websites to a Domain of One’s Own environment. I learned a lot during that migration which in turn helped motivate me to finally clean up the bavatuesdays multi-network site I’ve been putting off for over a year. Well, dabbling a bit every morning last week and yesterday, that is officially done. All sites on the bavatuesdays domain have been migrated and archived—I can take a short break before going after the jimgroom.net network. 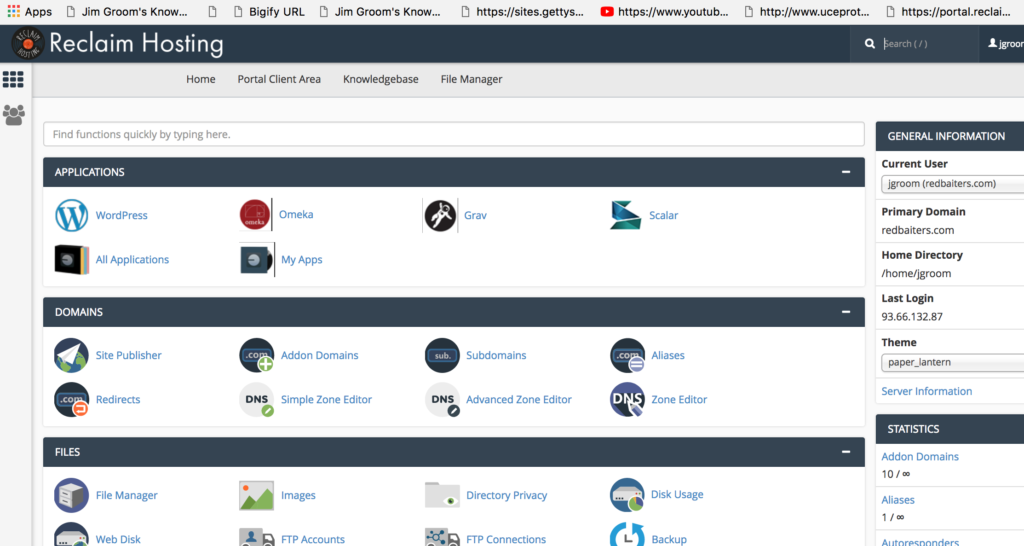 In the mean time I have been working on a talk for OER18 wherein Tim and I will be talking about hosting beyond the LAMP environment. Applications that run in other server environments that require Node.js, Ruby, etc. would be nice to offer, but integrating them into cPanel is not necessarily easy. I played with hosting Jekyl from a Reclaim account, but that does require a bit more command line work—which is often a non-starter. But alternatives to cPanel such as Cloudron that allow you to spin up containers that seamlessly manage the application’s server requirements, so all you are doing is choosing a domain to run it on. But we have also been playing with integrating SPLOTs more seamlessly into Reclaim’s offering, so there are several options, rather than any one way forward. Not to mention, cPanel and CLoudLinux are both working to make it easier to run Node.js and Ruby apps in their environment, so it may not necessarily be beyond LAMP at all—but rather within or alongside.

All of this brings me back to UNLV’s Faculty Sites, which have really paired down cPanel to the absolute minimum: WordPress, the file manager, and backups. That’s it. Minimalist, faculty can choose between WordPress or a DIY old school HTML site using the file manager to upload files (or FTP). It does kind of beg the question that I hear all too often about it being overwhelming, or there is too much to learn. No, it’s pretty much your own instance of WordPress, and those little files known as HTML (and a few links) that made the web possible. So, the future is as much within a LAMP environment, as it is beyond LAMP.

This entry was posted in open education, presentations, reclaim and tagged domain of one's own, oer18, reclaim, unlvit. Bookmark the permalink.