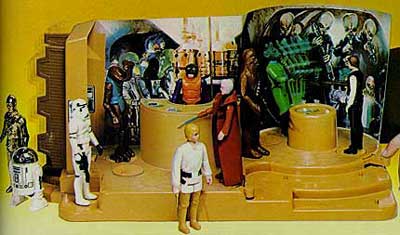 While the Death Star was the first and most impressive of the Kenner Star Wars play sets, the second may have been even more special to me given the subject: the Mos Eisley Cantina. I mean let’s face it, given the impact of that scene in the film, this play set would have been amazing if it was made out of tissue paper. The Creature Cantina is where you re-created Han Solo’s under-the-table jack of Greedo a million times. it is where you had Walrus Man and Obi Wan Kenobi duel it out, and it is also where you lined Snaggletooth and Hammerhead along the bar for happy hour. What can I say about this set, it was cheap, and not the best of the lot, but it was a little piece of a scene from the film that was burnt into my imagination.

From the scenic backdrop to the action platform, Kenner’s STAR WARS CREATURE CANTINA is pure adventure. By pushing the floor button, CANTINA door swings open and STORMTROOPER can enter. WALRUS MAN threatens LUKE SKYWALKER at the bar! Move action lever and BEN KENOBI knocks over creature. In rear alcove, HAN SOLO meets GREEDO. With action lever, SOLO knocks him over in mock battle. Circular bar surrounded by foot pegs for placement of SNAGGLETOOTH, HAMMERHEAD, or other STAR WARS action figures (not included). Ages 4 and up.

And the ever-important box: 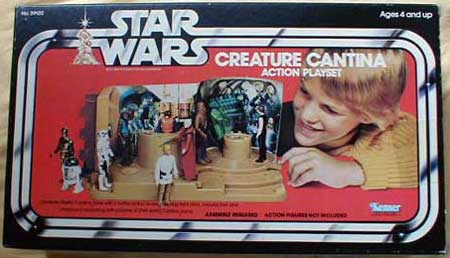