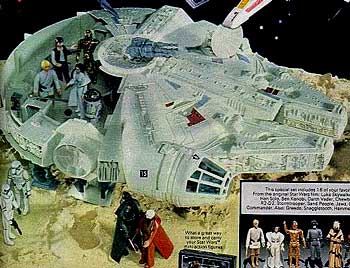 In 1978 and 1979 the Sears Xmas Catalogs changed markedly from the previous years for two reasons that I can tell: consumer ready video game units like Atari 2600 and Kenner’s Star Wars line. With the explosion of these two realities in the toy market, from 1978 until 1984 most toy catalogs would pretty much be a Star Wars/Atari 2600 vehicle for consumption. And given those were my formative years of childhood in regards to toys, in should come as no surprise that my top ten would reflect that reality. But not entirely, because the other development in this moment that wasn’t considered a toy, but may have been the greatest toy of all, is the VCR, which represents the third element of this holy trinity of the late 70s and early 80s.

With that being said, I guess it was just a matter of time before this series got to the Kenner’s Millennium Falcon, it was without question one of the most awe-inspiring toys of the day, with removable hatches, entrance ramps, landing gear, 360 degree gun cockpits, remote force ball, the whole nine yards. This was absolutely a toy to be reckoned with.  And one of the few issues I had with it, is that I never seemed to have enough Storm Trooper figures to reproduce the amazing feeling of the first run box for this toy. And in many ways, as is often the case with the bigger Star Wars toys, the box was a huge part of the toy.  I loved the way they made the color picture on the front a kind of black and white cartoon on the back—what a wild aesthetic I never really thought about until now. 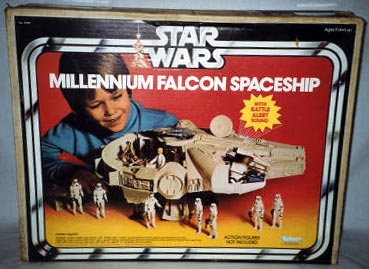 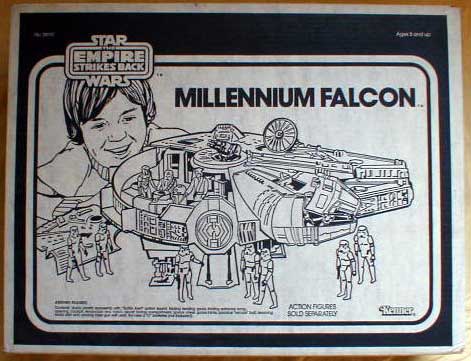 And here’s the original commercial:

And here’s a commercial that frames the whole early line of toys from Kenner, my guess s that this commercial was released in early 1979: