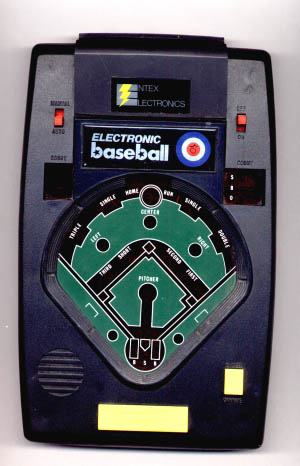 This is another early hand held digital video game from 1979 in the vein of the Tomy series, though in my mind far more sophisticated. In fact, I wasn’t a sports video game fan as a kid, but after playing this at a friend’s house I was blown away. I’m not sure whether it was the remote pitching unit with five different pitches, or the fact that the balls and strikes were tracked by the LED unit, or even the fact that they included paper scoring sheets for you to follow your entire games.  But for me, this was a game I was immersed in for hours at a time—almost like a real baseball game.  I would often think back to this game when playing the EA Sports baseball series on Playstation. This game was all about verisimilitude, and I have to admit it was pretty impressive back-in-the-day, and the follow-up version, Entex Baseball 2, was supposedly even better. 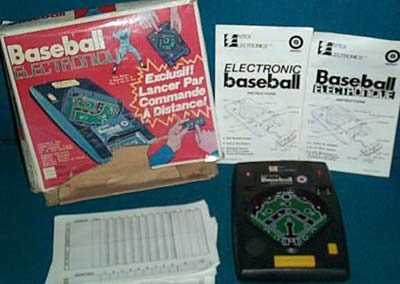 Update: Just found this review on YouTube by a young kid who is reviewing the Entex Electronic Baseball in response to someone discussing the Milton Bradley Microvision Handheld. As an aside, I dig this kid because he know he is the best 🙂

This entry was posted in 1102xmaS and tagged 1102xmaS, baseball, toys. Bookmark the permalink.