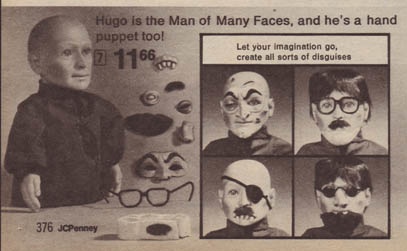 I actually didn’t have this toy, but damn it I shouldn’t have after reading Plaidstallion’s write up (included below). But in truth I was pretty much solidly against any toy I was expected to be imaginative and creative with.  I pretty much held the strong party line of only buying into heavily marketing toys that represented just one arm of capital’s media assault for shaping the ultimate consumers of the future.  I was a guinea pig for capitalism’s creation of the bionic consumer of the 80s, and I quickly learned to avoid anything not heavily marketed, which means I had no time for bland board games, hippie arts &crafts, and anything else resembling some pre-historic notion of traditional play.

In 1975, Kenner produced a doll that was the brain child of special effects artist/director/writer Alan Ormsby who directed the film Children Shouldn’t Play with Dead Things and authored the classic scolastic book Movie Monsters which probably spawned a legion of Monster kids by itself.

Hugo was a great concept, a puppet version of Lon Chaney Sr, complete with makeup kit so you could give him hundreds of combinations of creepy disguises. As a bonus (?) the Hugo puppet on it’s own was creepier than ten ventriloquist dummies, his unusual stare had him featured in Pee Wee Herman’s original act and on the popular “Uncle Floyd Show”.

And here are some color treats: This entry was posted in 1102xmaS and tagged 1102xmaS, Puppet, toys Hugo: The Man of 1000 Faces. Bookmark the permalink.