Context: I will be attending the The New Web course in Victoria B.C. in a little over a week and my first order of business is to research an explain a Web 2.0 application. I was assigned digg, so here it is …

I have had some exposure to digg over the past year, but I never actually joined the network so I never knew exactly how stories where promoted to the front page. So, I’ll start by by giving you a quick over view of digg and then going step-by-step through the process of submitting and article to digg. But first, what is digg?

Digg is a user driven social content website. Ok, so what the heck does that mean? Well, everything on digg is submitted by the digg user community (that would be you). After you submit content, other digg users read your submission and digg what they like best. If your story rocks and receives enough diggs, it is promoted to the front page for the millions of digg visitors to see. (Copy from their website)

In fact, digg was not always strictly a site centered upon user-submitted content. When I first was told about it a year ago, it was more geared towards straight tech news on the web, not unlike slashdot. The re-imagining of digg as a broader site purely driven by user-submitted articles is taking the logic of popular group blogs like slashdot and boingboing and democratizing the process so that anyone can submit an article. Each digg community member gets a vote (or a digg) for each submitted article, if an article gets enough votes it makes it to the front page, or to the big time as it were, for digg is one of the most highly trafficed sites on the web, reporting close to 8 million unique users monthly.

So, in the spirit of being part of the democratic push for opening up web sites to anyone who has something to say, I got an account and submtted my first article or digged it or dug it or is it have diggen? Below are a series of screenshots that take you through the process which is amazingly simple and quick (a key element for web 2.0 technologies adoption by a large number of users).

After signing up for an account, I logged in and two links appeared underneath my name in the left-hand sidebar. These links allow me to check my profile and submit an article. When I clicked on the submit article link, I was brought to the following page:

After checking the category, (my article is link to video footage on YouTube from a 1960s civil defense film starring Gene Hackman, I was not sure to make the category celebrity or video -I chose celebrity, but it may have been better suited for video -who knows) and including the link for my article, I went to the second step which was to write a brief description of the article, no more than 270 characters, I believe. 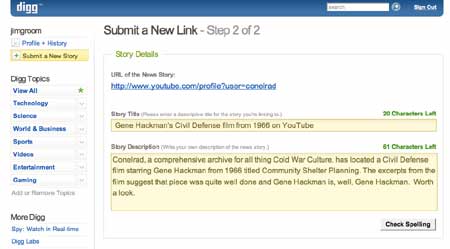 After that, I ran spell check and then submitted my article. Before digg accepted it, however, they checked it against their database of existing artcles with similar terms to make sure it was not repeated content. I checked the existing stories, none of them were about this particular topic, so I continued and the article was accepted. My first digg. 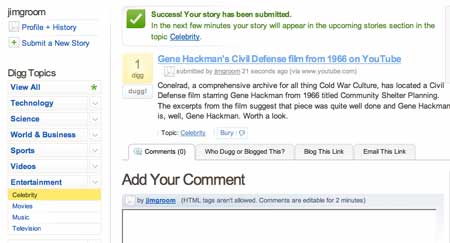 Now, the question hit me. How do people see it to vote on? Well, if you are logged in there is an upcoming stories tab that allows you to see and vote upon all the recently submitted stories. If enough people digg your article, you become a front pager which means a tremendous amount of traffic, fame and fortune! Well, not really, but you do get the satisfaction of knowing that several people besides you found what you had to contribute worthy of note. 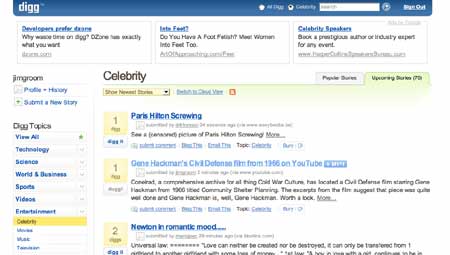 If you have any additional questions or want to explore digg in more detail, here is the digg FAQ. Digg is a web 2.0 site of the “highest order” because it frames an open, collaborative community that depends upon a distributed network of users’ constant input for its survival -for how long and in what directions will this site move is another question that each and every one of these new technologies is going to be faced with as they become increasingly popular. The urge to sell to the highest biddder becomes harder and harder to resist, as we have recently seen with YouTube and Google merger.

This entry was posted in video and tagged web 2.0. Bookmark the permalink.