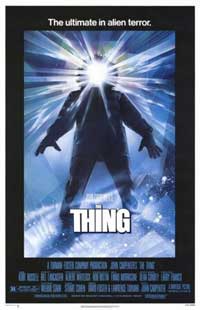 According to the Press Esc blog the FBI is offering to brief universities on how to identify an international spy on campus, here are some of the indicators listed:

Save for the unexplained affluence, I’m a serious target on every count. In fact, I have even gone so far as to hole up with a foreign national. This list goes to show the way in which draconian abstraction makes everyone a potential threat. It’s just like John Carpenter’s The Thing, pretty soon we’ll be doing blood tests with blow torches to separate the “aliens” from the “red-blooded Americans.”

On a much more important level, the U.S. has benefited tremendously from the influx of international students who bring new ideas, ways of reading, and imagining to our campuses. How many of these students, to the detriment of colleges and universities throughout the U.S., will be far more willing to take their talents to Canada, Mexico, Europe, China, or some other nation that doesn’t treat everyone with a foreign passport as a potential on-campus spy. Additionally, how does this affect the rest of US culture? Where would US film history be without the influx during the 1930s and 40s of so many brilliant European filmmakers like Billy Wilder, Ernst Lubitsch, and Fritz Lange, or acting giants like Peter Lorre, Greta Garbo and Marlene Dietrich. Ironically, these unequaled giants of Hollywood were fleeing the horrific realities of Nazi Germany? How many people know that Thomas Mann wrote Doctor Faustus in Los Angeles? Or that Bertolt Brecht had to flee the U.S. soon after the end of World War II because of suspicions that he was a spy for the communists (he was called to testify before HUAC in 1947 and was blacklisted)? Paranoid isolationism kills the powerful possibility of a variegated and multivalent imagination and decimates a culture’s very vitality. I’ll quote the princess who I love so dearly for her fearlessness in speaking out against the excesses of Empire, “The tighter you clench your first, the more star systems will slip between your fingers.”

This entry was posted in Uncategorized and tagged american studies, fbi, power. Bookmark the permalink.