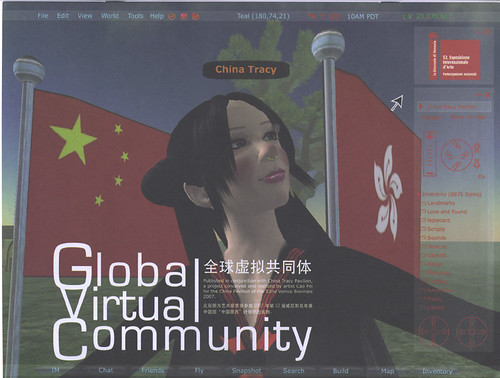 Marjorie Och, a Web 2.0 compliant Art Historian here at UMW, recently returned from the Venice Biennale. Better yet, she returned excited about technology and baring gifts! One of the exhibits at the Biennale (the premiere international contemporary art exposition) was a Second Life installation by an artist (or group of artists?) who goes by the name of China Tracy (here’s a description from the booklet Marjorie gave us). Now, as I alluded to briefly, I’m not certain whether China Tracy is simply an artist exploring Second Life as the booklet seems to suggest, or rather a team of artists fashioning a documented experience of this metaverse through photography and machinima video. I am fairly certain its the later given the infrastructure surrounding the project, but I may very well be wrong. The brochure is pretty interesting, it contains some images of their spaces, several pages of a film-like strip of photos from their explorations in Second Life. It also contains their contains their online Urbanization plans, as well as the brilliantly phrased Neo Existential Manifesto -unfortunately this part of the booklet is written entirely in Chinese.

Now all of this is coming from a guy whose excitement in regards to Second Life has waned considerably up and until Alan Levine demonstrated the imminent possibility of live voice chat at Faculty Academy. And given our UMW’s new relationship with NMC, perhaps its time we built something cool like a bitchin’ Mashup Multiplex! particularly since the idea of contemporary movement of Chinese artists in Second Life is very intriguing for me. If China Tracy has you interested that are many more resources to choose from below.

Also, Wagner James Au’s New World Notes has been all over this. He has had two posts on China Tracy here and here.

Below are some machinima videos in Second Life by China Tracy, the first is the opening of the China Tracy Pavilion for the Venice Biennale.

The following three are a sequential series of videos that, quoting Wagner James Au:

China Tracy’s art project mentioned here recently hit the SL machinima stream, and it’s beautiful, meditative, sometimes sardonic, but ultimately moving and hopeful. As a movie, you may see the influence of Wong Kar-Wai and Wim Wenders, among other world class directors. Nearly a half hour in total length, it plays out in three separate but thematically-related parts. Part I is an introductory montage to Second Life, and it lingers on both the beauty and the excesses of virtual capitalism that also make the metaverse a consumerist sprawl.

Finally, Marjorie Och also mentioned, dare I say raved about, the work of the Mexican artist Rafael Lozano-Hemmer who is “[an] electronic artist, [who] develops large-scale interactive installations in public space, usually deploying new technologies and custom-made physical interfaces.” from what was described to me, this artists installations sounded simply amazing. I’m gonna do my homework, talk some more with Marjorie, and see what I can come up with, for I personally love installation art when it is totally off-the-wall -and from what little I understand this artist was not only out of this world, but also one of the biggest highlights of the Biennale. Exciting stuff!

2 Responses to China Tracy & Second Life at the Venice Biennale