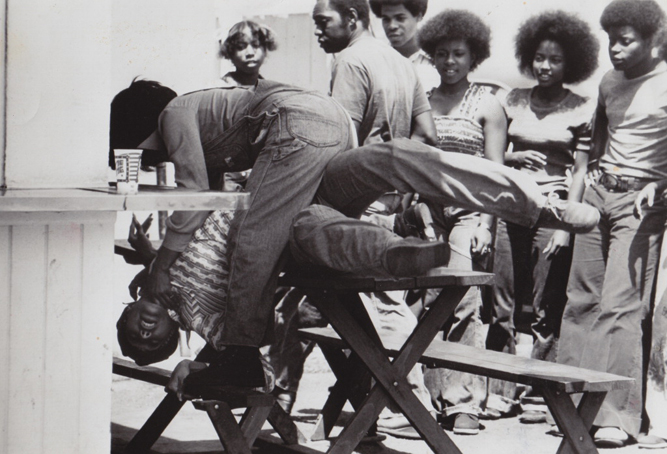 Last night Alan Levine and I went to the Alamo Draft House on 6th street in Austin, Texas to see Emma Mae (1976) (a.k.a. Black Sister’s Revenge), ostensibly a run-of-the-mill Blaxploitation film—though truth be told there is nothing run-of-the-mill about good Blaxploitation. What started out as a brilliant movie going experience—and it was definitely that—became a powerful web-fueled trip through my time at UCLA in the mid-1990s,  as well as a much-needed spark to my love affair with film programming.  Moreover, through my web searching in relationship to this film I realized how blogging at UCLA’s Film School and beyond made the experience of the web that much richer!

But before I get to deep into my web odyssey around Emma Mae, it might be useful to talk a bit about the film and how and why it got me so excited. The film explores how Emma Mae, a country girl from Mississippi, comes to LA to live with her cousins after her mom dies. The film sets us up, as Jacqueline Stewart notes,

…for a Cinderella story, in which Emma Mae’s sophisticated, college student cousins mock her backward ways and she’s separated from her Prince Charming just minutes after they come together at a big dance.  But Fanaka reverses the formula. Emma Mae’s broken romance, and her L.A. family’s stumble from bourgeois status, forge a powerful sisterly bond virtually absent from Blaxploitation fare.

So while on first glance the film seems like straight-up exploitation—-and in some regards it depends heavily on the tropes of that genre—-it also resists it by breaking out of some of clichès. What struck me strongly while watching the film last night were the gritty sets that took place inside rundown LA projects, as well as the on-location scenes at Compton Community College—which is a setting close to my heart given I went to community college in Long Beach California in 1991-1992 before transferring to UCLA.* Fact is, everything from the sets to the acting to the campy, yet compelling and heartfelt, performances suggested more than a slick, industry-driven Blaxploitation film but something more in line with an art-inflected student film, which when the credits rolled was quickly confirmed. The director, Jamaa Fanaka, notes in the credits that much of Emma Mae was filmed on location in Compton and also thanks “u.c.l.a”. and the Black Studies program at UCLA, the first of its kind that had only begun two years earlier in 1974.

Those are just few facts that got me started on my web searching late into the night, but I would be remiss if I didn’t note just how entertaining Emma Mae remains. There are various Blaxplotiation-inspired fight scenes wherein the protagonist becomes all at once a wonderfully strong and camp character—something extremely difficult to balance but accomplished brilliantly by Fanaka. The video below highlights a number of the fight scenes from the film which demonstrate how funny and outlandish the film could be at times, and there were more than a few occasions last night that the audience broke out in hysterics—there was even a thunderous applause at the end of the film. 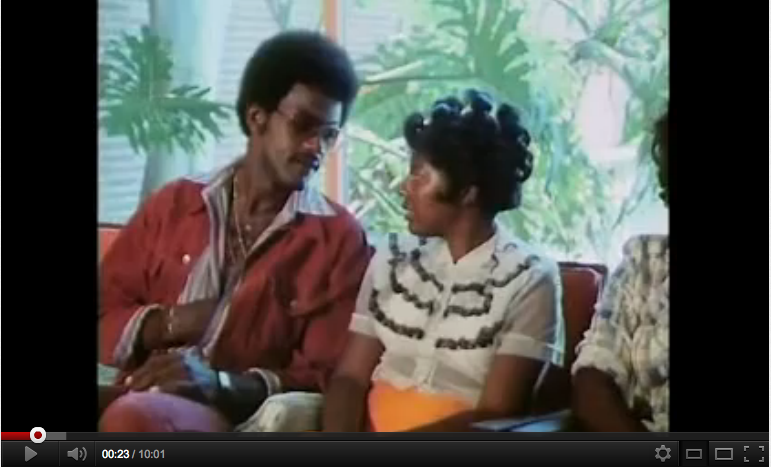 So coming out of the film last night not only was I thinking about what a treat it was, but I was also wondering about the nod by the filmmaker to UCLA in the credits, I am a proud alum after all. On the walk home Alan was searching around a bit on his phone, I was at a disadvantage for the moment, and found a number of sites through UCLA that talked about the film. When I got back to my hotel room and jacked into the web I quickly discovered that Emma Mae was not only a student film made by Jamaa Fanaka while he was attending UCLA, but actually only one of three films he made while a student at UCLA—which is mind-blowing! The other two are Welcome Home, Brother Charles (1975) and the prison film classic Penitentiary (1979), what’s more he also did an 8 MM short while at UCLA called “A Day in the Life of Willie Faust, or Death on the Installment Plan” (1972) which is about a herione addict and has been made available on YouTube thanks to the UCLA Film Archive and the L.A. Rebellion seminar taught at the UCLA Film School last semester, which has a wonderful course blog here.

One of the things I started to realize is that almost all the good information I was getting about Emma Mae and Jamaa Fanaka was from the UCLA Film School site/exhibit on a film movement centered at the UCLA film school during the 1970s termed the “L.A. Rebellion” by film historian Clyde Taylor. I was not only intrigued by this movement given the amount of time I spent at what was UCLA’s Melnitz theatre back in the early 1990s, but I had also sat in on a number of classes of the late Teshome Gabriel’s Third Cinema course, who came to UCLA as an instructor in 1974 during the height of the L.A. Rebellion movement. Turns out Gabriel, an influential theorist on Third World Cinema and post-colonial film (you can find a number of his articles freely online here), was there as professor Elyseo J. Taylor—the inspiration for many of the early members of  the L.A. Rebellion movement—was denied tenure. The reasons for his denial remain unclear to me given my cursory searching, but I would love to hear more about this if anyone out there knows more. Through his 1971 documentary Black Art, Black Artists Taylor helped articulate the vision of the movement by arguing how African-American Art was greatly under-represented, not to mention under-appreciated. He argued black art needed to be liberated from aping white mainstream culture. It needed to find new models, new inspirations, and an independence from the tyranny of the mainstream—much of what still defines the numerous films of the  L.A. Rebellion movement over its twenty year history.

So one immediate result of watching Emma Mae last night was I got a new found appreciation for the film school at UCLA where I spent a ton of time at on account of my girlfriend of the time, who was an undergraduate film student. I was used to hearing about famous alumni like Francis Ford Coppola, or even the more cult figures I identified with like Alex Cox of Repo Man fame, but the filmmakers of the L.A. Rebellion were relatively absent to my hanger-on eye. Although, it made not have only been me given that the first film retrospective of the L.A. Rebellion movement wasn’t until 1997 and was, ironically, hosted at the University of Chicago thanks to the work and vision of film professor Jacqueline Stewart—who was also instrumental to the more recent symposium at UCLA “L.A.: Rebellion: Creating a new Black Cinema.”

Pretty amazing how much information you can find about a film movement you previously knew nothing about in just one evening thanks to the web, no? I love you worldwideweb, what’s more I love universities and colleges that use the web to openly share the work their seminars, symposiums, archives, etc. are working on, that makes all the difference. What a huge boon sharing stuff like this is for people like me who are motivated to learn about a subject they are fascinated by. In fact, even during my days at UCLA I didn’t formally study film, but I spent an inordinate amount of my undergraduate career in what was formerly known as Melnitz Theatre watching and learning about the art of cinema thanks to great professors like Peter Wollen, Vera Dika, and Teshome Gabriel—open education at its best!

Which finally brings me to the magic of UCLA Film Archivist Jan-Christopher Horak posts about the Archive’s preparation and thinking about collecting, exhibiting, and preserving the L.A. Rebellion films. From his 2010 blog post termed “Forming History through the Archive” he reflects on the fact that the UCLA Archive has heretofore made no attempt to bring the movement’s films home:

In 2009, we decided to….begin a truly holistic research and preservation project, by bringing the “L.A. Rebellion” home.

As well as how that’s about to change:

It is the first time the Archive is not waiting passively for films and television to “walk in the door”, but rather is going out and saving a specific group of films we believe are important. We have assembled a team of scholars, filmmakers and professionals to research existing film and paper collections in libraries and archives; conduct and capture oral histories with participating filmmakers; collect film elements for conservation, restoration and exhibition; collect paper documents from filmmakers for the special collections library; publish a book which will contextualize the L.A. Rebellion and frame it in relation to its time period and parallel developments in film and the arts; strike many new prints for a massive retrospective exhibition in Fall 2011. We have received initial funding from the Getty Foundation, since the “L. A. Rebellion” film exhibition will be screened in the context of the Los Angeles wide art exhibition, “Pacific Standard Time.”

How cool is it that Horak is blogging the process and thinking behind one of the most extensive and important film archives in the world! What’s more, this group of academics, filmmakers, and students are shaping film history by declaring this group of films by these particular filmmakers matter, and here’s why. I love that! That is scholarship, and it is writ large on the annals of the web for anyone to intervene in, interrogate, or even help by pointing them to even more resources. In fact Horak has been blogging his progress on this project somewhat irregularly for the last couple of years. Here is another post about an unexpected encounter with Pam Grier at an under-attended screening of Coffy (1973). And last June he blogged about the preparations (notice this time on a UCLA Film School blog) for the “L.A. Rebellion: Creating a New Black Cinema” program, which ran from October 2011 through December 2011. And Horak blogged again in September of 2011 to note that they had discovered yet another filmmaker who should be considered part of the L.A. Rebellion movement:

Ijeoma Iloputaife, who uses the nom de plume Omah Diegu, was a film student from Nigeria at UCLA in the late 1970s and early 1980s. She produced several films while in school, including African Woman U.S.A. (1983), but her magnum opus is a personal documentary feature, The Snake in My Bed (1995), a Nigerian-German co-production.

So, after a seemingly “throw-away” Blaxploitation film I learn about an entirely new genre of films I need to explore that link me back to my alma mater and remind me just how powerful sharing on the open web is for all kinds of learning.

* Quick fact on this: as a California resident my tuition was $35 a semester for a 12+ credit load, which I could pay after a night’s work of bussing tables.

3 Responses to Emma Mae, UCLA, and the L.A. Rebellion