Honorary DTLTer Shannon Hauser wrote an awesome post today in which she tracks down audio of a 1957 reading at Mary Washington by the titan of U.S. literature William Faulkner. (At the time Mary Washington was the University of Virginia’s women’s college.) Shannon points to an article in the school newspaper of the event, noting Faulkner’s presence didn’t even make the front page. How is that possible? In 1957 Faulkner had not only won the Nobel Prize for literature, but he was probably the most celebrated writer in the world. Depsite all that, according to the Bullet only a small group of students and faculty came out to hear him read his short story “Shingles of the Lord.” So crazy, although I wonder if my own admiration for Faulkner’s literary brilliance colors my incredulity. 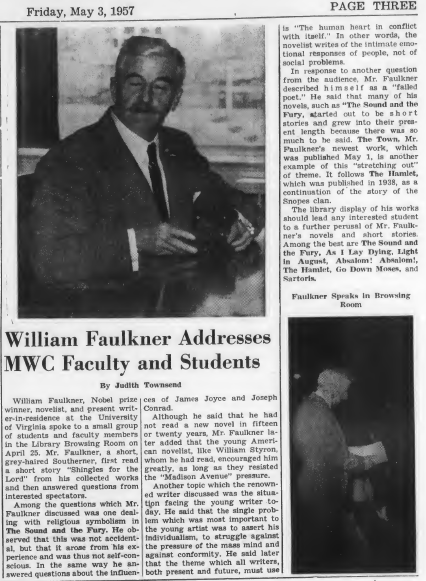 Either way, the fact that Faulkner was here and spoke about his work matters to me. It reminds me what college was for me in my freshman year: an experience to grapple with the world’s most confounding genius, in particular The Sound and the Fury. Below are the links to the audio from his visit to mary Washington, and major kudos to Shannon for bringing this bit of Mary Washington history into the light.