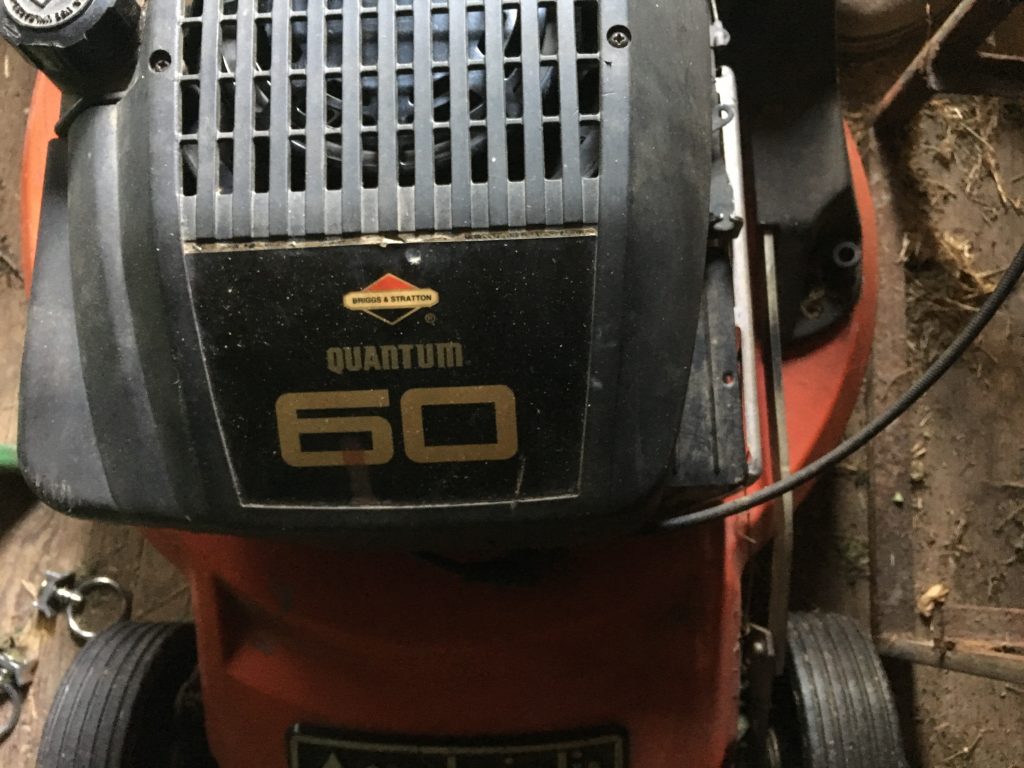 Two weeks ago I took a Briggs & Stratton Quantum 60 lawn mower apart because I couldn’t get it to start. The initial issue was apparent, the pull cord was broken and needed to be replaced, that was easy enough to take care of after watching this YouTube video. And while I fixed the pull cord, the lawn mower was still not starting. I got brave and proceeded to take apart and clean the carburetor with the help of this video. I was able to take it apart and put it back together (which was cool), but the gasket between the air filter and carburetor was shot and did not survive the operation—an issue I’ll return to shortly. Besides that, the carburetor was fairly clean and there were no apparent blockages, so the carburetor itself wasn’t the issue. But after putting it back together and trying it again the gas was not getting to the spark plug and I was stuck. I decided to let it sit because I was wasting time.

I can verify that Casa Bava has a full blown vineyard in the backyard,… @jimgroom 1/3 pic.twitter.com/nUcHxhOyfc

Fast forward two weeks to this past Friday, I was fortunate enough to have Mark Morvant and his awesome family visiting Trento for a couple of days to testify to the posh life I’m living in the Italian Alps 🙂 In fact, I’ve had a couple of amazing visitors already (here’s looking at you Shannon Hauser and Brian Lamb), which has been a total treat. Antonella and I really enjoy showing off Trento, and I’m sure we’ll have many more opportunities in the coming months. While I was showing Mark and his dad Clifton around the house I mentioned in passing my feeble attempt at fixing the lawn mower. Turns out Mark and his dad are no strangers to fixing small engines. In fact, Mark’s dad Clifton taught students how to fix engines for decades, and Mark was his trusty assistant since he was a boy. So crazy and so cool! 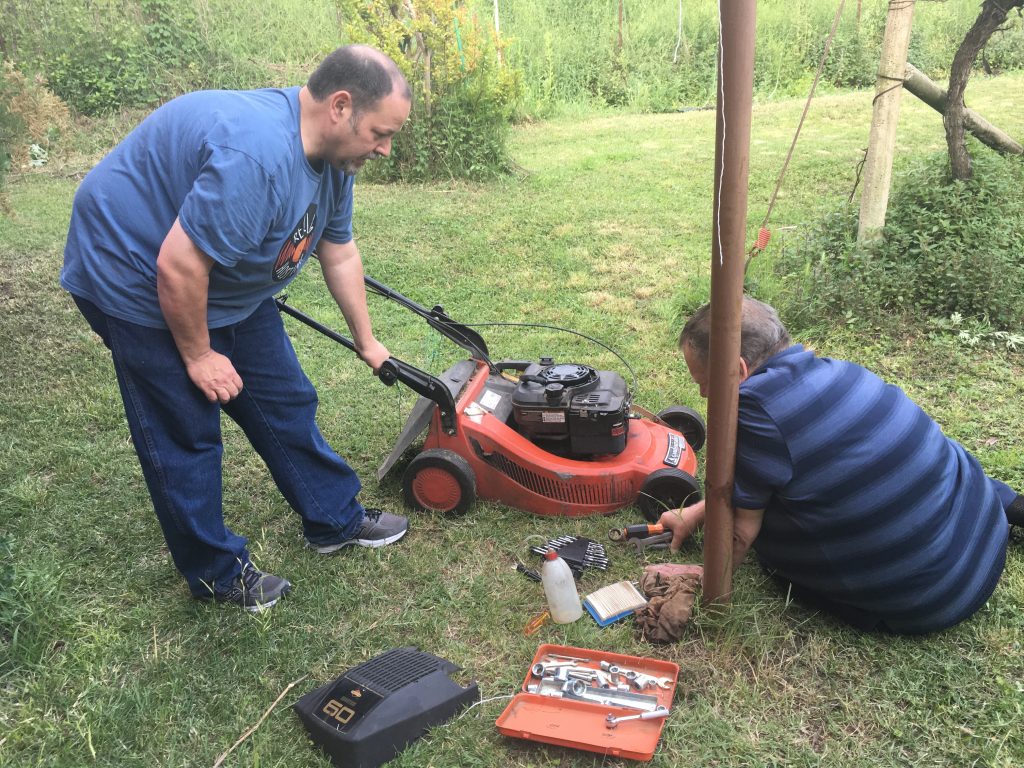 Anyway, when they offered to take a quick look I jumped at the chance because I am shameless, and they made short work of diagnosing the issue. Turns out that broken gasket I ignored between the carburetor and air filter was crucial for enabling the primer to spray gas into the combustion chamber so the engine would turn over. Mark also noted the tube going into the carburetor was a bit clogged, so the gasket was not necessarily the only reason it wasn’t working, but definitely a reason. But they didn’t stop there, Clifton quickly took apart the carburetor and checked it over again, and after reassembling it had mark spray gas into the combustion chamber. We then pulled the cord and the engine showed signs of life. Mark sprayed gas into the chamber a couple of more times (effectively manually doing what the primer button does) and we got it running. After that I was amazed how Clifton used his finger as a choke to create the pressure needed to make the fuel flow steadily towards the engine. Clifton went on to tell me this process is known as the Venturi effect, named after the 18th century Italian scientist Giovanni Battista Venturi who published the first treatise on it in 1797. I even found an awesome science GIF on his Wikipedia page that demonstrates this physical principle of hydrodynamics. Educational GIFs FTW!

So, in less then 20 minutes they had the mower diagnosed and running. I ordered a carburetor repair kit on Amazon yesterday, and it should be here in another week. 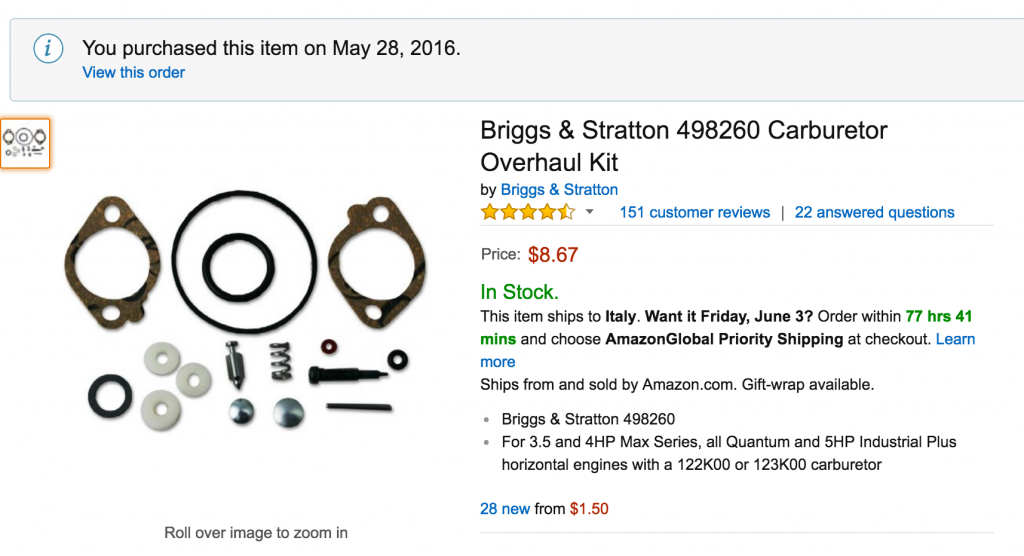 I just need the gasket, but it might be useful to have all the other pieces just in case something goes wrong. So, nothing like bringing some good old fashioned American ingenuity to Trento! A special thanks to them both, and not only for the like-new mower (though I’ll take that), but particularly for the privilege of getting a glimpse into a father-son relationship that is so full of mutual admiration, cooperation, and love—a rare treat, indeed!