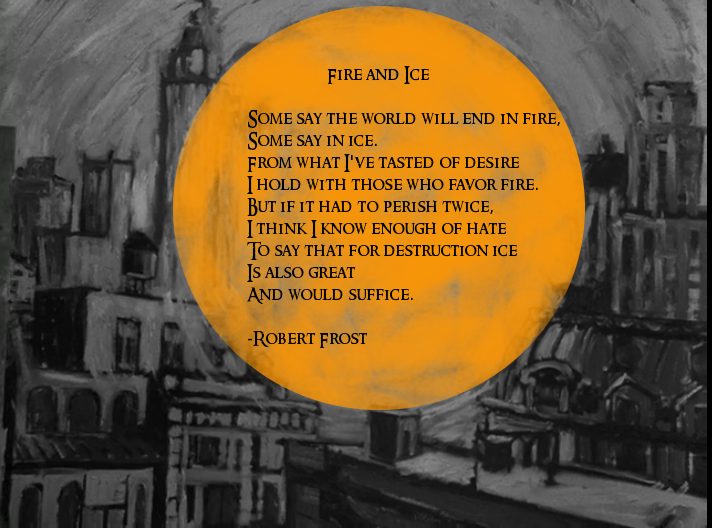 Inspired by Claire Patrick’s Art Invitation for “The Midnight Sun” Twilight Zone episode, I decided to take Robert Frost’s poem “Fire and Ice” and place it on top of Norma’s painting from that episode. I love that the poem maps beautifully onto the episode’s themes and plot line. I also appreciate the added bonus of the sun in Norma’s painting as the backdrop balanced by Frost’s last name as the representative chill you get at the end of the episode 🙂

The image was pretty easy to make, I grabbed a screenshot from the episode on Hulu, and then brought it into GIMP and used the ellipse tool to highlight the sun and airbrush it orange (leaving it a bit textured). Then I simply added the text on top using the Ringbearer font and aligning the text accordingly. Simple.

Now, I have yet to start my audio assignment, so I thought reading this poem set to some eery music might be cool. So I read the pome into audacity and then found the Twilight Zone theme music on YouTube, and downloaded it using pwnyoutube.com. I brought it in as a new track to audacity under Project–>Import Audio and then cut of a 15 second piece and slowed it down so it would expand to the 25 second reading. I then clipped a bit here and there and the effect is pretty cool. There is no real assignment for Twilight Zone poetry images and audio, but I will change that soon. In the mean time, I have officially started my audio assignments, and finished my design assignments:

An added bonus while searching around for Frost’s “Fire and Ice” poem is that a fan of this episode wrote a sequel for “The Midnight Sun” titled “Fire and Ice,” you can read it here. All of which reminds me how awesome yesterday’s Daily Create was, namely “Write the sequel for ‘Time Enough at Last’.” Love it!

5 Responses to Fire and Ice