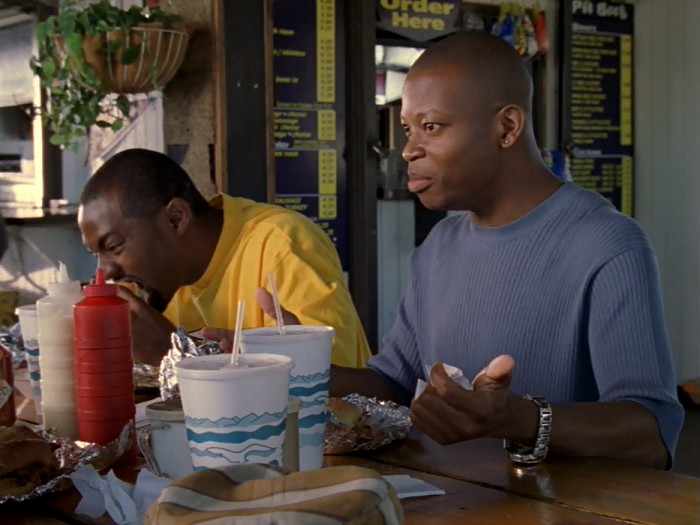 After returning to teach ds106 as an online course at UMW for the first time in over a year, I decided to experiment with an idea Mike Wesch mentioned while in Irvine this summer preparing for Connected Courses. He noted that he goes out to lunch with a different student of his every day. I loved this idea. And given that most of the students taking the wire106 version of ds106 this Fall are residential students, I decided to organize group lunches for anyone interested. Today was the first one, and it was pretty awesome.

Maggie, John, Ien, and Meredith joined me at a local eating establishment to get to know each other over lunch. After working through the expected initial awkwardness, we sat down, ordered food and started talking about The Wire. And, interestingly enough, we all got into it. They confessed to binge watching, admitted using ds106 to procrastinate doing other class work (a badge of honor), and generally acknowledged they were hooked on the series. Needless to say, I was fired up. We talked about Wee-Bey’s exotic fish fetish, the tragedy of Wallace, the existential angst of D’Angelo, Greggs as natural police and much more. It was fun.

On top of that, we came away with some ideas for class activities, assignments, and projects that Meredith was kind enough to capture at lunch before they slipped away.

Live Tweeting Episodes
It even produced some ideas for both wire106-themed assignments and possibilities for coordinating activities for the class to come together. For example, watching episode 1 of Season 2 together by starting it at a predetermined time and live tweeting out our reactions. This is something we need to make happen.

Opening Scene Episode
Take all the opening scenes from the 13 episodes of season 1 and edit them into a video wherein they play one after the other chronologically to see how it would flow as it’s own episode.

Beginnings and Endings
Juxtapose the opening and closing scenes of each episode in season 1, noting how much they play off each other in a number of episodes. One good example to start with is episode 10, “The Cost.”

Wire Colors
Another assignment that came up was doing an analysis of the use of color in the series. And we’re still thinking about how we would frame that as a compelling visual assignment. Ideas?

Wire 106: Messing with the Macguffin
John suggested an assignment that would have a character saying something that changed the nature of the episode, if not the series, all together. Like, for instance, Deputy of Ops suggesting a Bust and Buy on a case with a wire would be out of the question. Poor Kima. Kinda like a Wire 106-themed “Messing with the MacGuffin” assignment.

OG Technology
If you were to change the technology in a scene, how it would be different today. Could there be a season 1 Wire without pay phones?

Where are they now?
Playing off the fact many of the actors in The Wire have gone on to successful careers, do a where are they now assignment that plays with the before and after. Perhaps even creating a fiction story around the changes. This could be very interesting for Wallace, Stringer Bell, Snoop and more.

Clothing Change Ups
A design assignment that has you photoshopping one character’s set of clothing onto another character.

Putting Words In Their Mouth
Giving a quote that one character said to another character.

Wire on the Twitter
Create a twitter account for each character in an episode then tweet the dialogue of that episode. This might be a group project later in the semester, it would take some interesting coordination, and the tweets might be an awesome subtitle to a live projected episode at the end of the semester.

Audio Commentary
Provide a polished, rehearsed audio commentary to an episode. Make it a special feature anyone can download and play as part of their watching of the series.

The idea of coming up with fun assignments over lunch is a really appealing focus for these sessions, at least for me. And it could be one approach we take to these get togethers. But the real goal is to simply get to know each other. The idea of residential online learning that Mike Caulfield has written about is still very appealing to me. An hour and a half lunch with four different students twice a week, over 13 weeks, means I could spend almost 5 hours with every student for focused, relaxed, and  personalized time to get to know them, have a good meal, and get creative about what we can do with the class. That to me is what online makes available for a community like UMW. More time to get to know each other, have fun, and re-imagine how we learn together. And what better venue that #ds106!

This entry was posted in Uncategorized and tagged ds106, lunch, wire106. Bookmark the permalink.