Getting the Commodore 128 Up and Running

So last week while talking with my mother-in-law about the Console Living Room exhibit I worked on last year (my Italian is definitely improving), I mentioned on of the pieces we never were able to get our hands on was a Commodore 64—which was a shame given its influence. She then proceeded to tell me that she is pretty sure they have one in the cantina (Italian for basement).  Lo and behold 20 minutes later we were unpacking a fully equipped Commodore 128, the less known successor to the Commodore 64.

I found a fully equipped Commodore 128 at my mother-in-laws today, I am very stoked to try it out! #umwconsole pic.twitter.com/f1G47gdFhh

The C128’s relationship to the C64 is somewhat akin to the Atari 5200, but with one very important difference—everything for the C128 was backward compatible with the C64. In other words, pretty much any game that worked on the C64 worked with the C128. Disco! What’s more, the model she had was the C128D which was released in 1985 and specific to the European market with some significant differences according to Wikipedia:

Late in 1985, Commodore released to the European market a new version of the C128 with a redesigned chassis resembling the Amiga 1000. Called the Commodore 128D, this new European model featured a plastic chassis with a carrying handle on the side, incorporated a 1571 disk drive into the main chassis, replaced the built-in keyboard with a detachable one, and added a cooling fan. The keyboard featured two folding legs for changing the typing angle.

I spent the last week or so poking around the Commodore resources online in anticipation of taking the computer to our house (Anto’s mom was cool enough to let us play with it). After bringing it home on Friday I cleared out some space and got everything and ready to go but I had some cold feet. I was looking at the electrical cord and there was no power supply unit brick, something I would expect from an old computer. There was only what I later learned was termed an IEC connector (a.k.a the IEC 60320) or, “a set of standards from the International Electrotechnical Commission (IEC) specifying non-locking appliance and interconnection couplers for connecting power supply cords to electrical appliances up to 250 volts.” The female adapter look the middle connector in the following image: 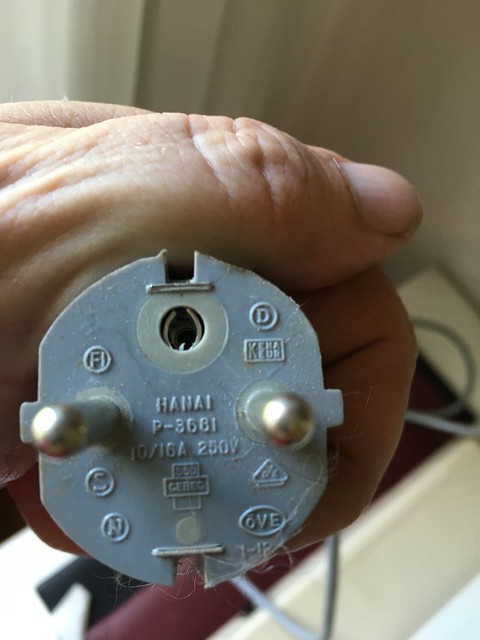 …and it wouldn’t fit into the standard wall sockets in Italy, so I was getting nervous. I really didn’t want to fry the C128, so I resisted the urge to just plug it into a surge protector and take my chances despite my impatience. But after some research the next day I was pleasantly surprised to learn that the C128 had the power supply unit built-in. This brief quick comment on this forum gave me the go ahead, “C128-D ? has internal PSU mate!” Awesome, I was ready to see if this C128 worked, and lo and behold it was fully operational!

The following video is a quick portal into managing the work the C128 alongside 3 eager kids who are all equally excited about the video gaming potential of this machine! 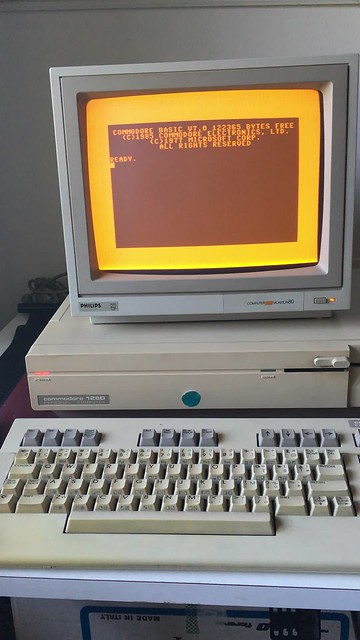 The yellow monochrome monitor is actually a Philips Computer Monitor 80, and it is an absolutely gorgeous yellow. But less than 10 minutes into playing with it the thing started to go, and within 20 minutes it was all but unusable give the whole thing started to look like this: 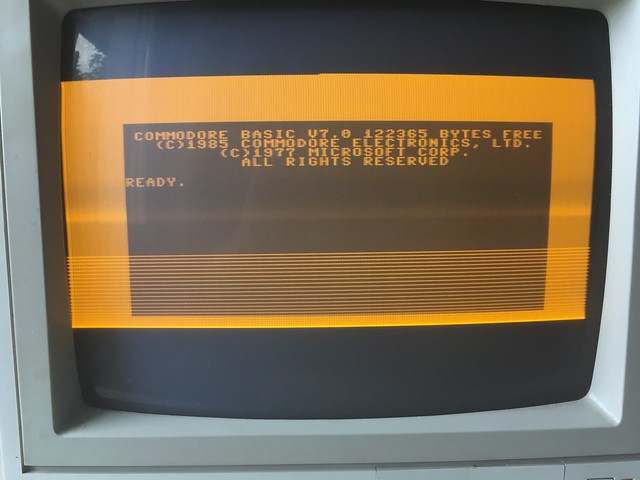 This was very depressing given how crazy  awesome that yellow is. I’m doubtful there will be an easy fix, but I am thinking about trying and find a TV repair shop here in Italy to get an expert opinion. Anyone out there have any experience with an issue like the one above? Is it fixable? 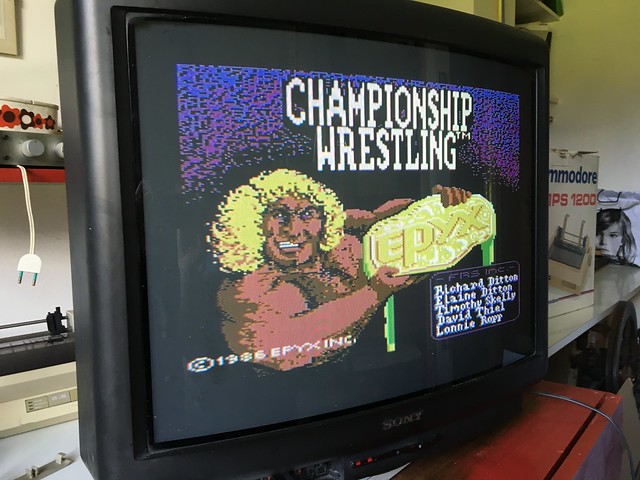 Anyway, turns out the Commodore 128 has video/audio out of the RCA variety, and we just happened to have a 27 inch Sony Trinitron tube television from the early 90s around the house, so we did not lose a beat. Or so I thought, the TV was working as a monitor but whenever I typed anything on the computer it would show up as some strange character on the screen, when I would type the o in Load I would get some odd clrscrn message. I was beginning to think the whole thing was shot, but then Tommaso noted that the only think that changed was that we plugged the joystick in port 2. Turns out, Tommy was right, and the video below has him recounting his troubleshooting prowess: 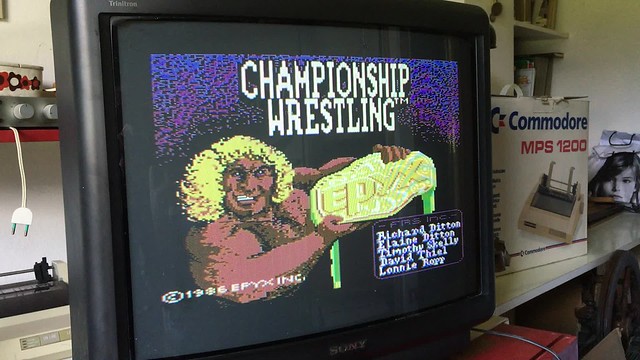 And we were off an running, we tried to get Donkey Kong up and running, but that was not working. So, we tried a Battlezone knock-off called Tank Attack and that worked perfectly. The computer came with dozens of floppy disks with all sorts of treasures, we’ve only just begun to discover. 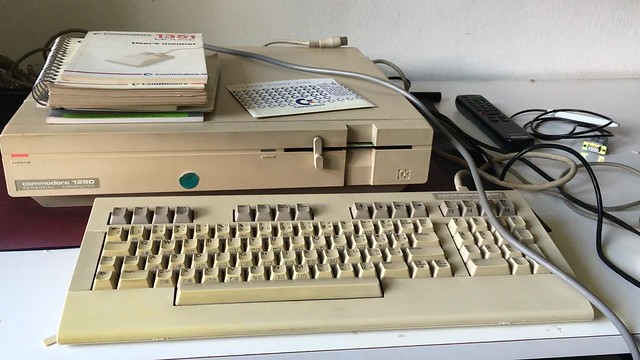 The next game we loaded was a trippy game called Necromancer featuring a Gandalf-esque wizard casting spells and growing trees. According to Wikipedia it is somewhat of a cult classic:

Necromancer was noted for its oddball concepts and frenetic gameplay.[2] A Creative Computing review claimed it “is one of the strangest, yet most imaginative, games I have ever played on the Atari computer”,[1] and “Necromancer is well conceived and beautifully implemented. The sound and graphics are out of this world.”[1] Brian Bagnall considered it one of William’s most notable releases on the Atari, among a notable career.[3] Reviewers continued to pour on the praise even decades later, and it remains a common fixture of articles on retrogaming.[4][5][6][7]

We enjoyed it, but the second level was just too bizarre and we couldn’t figure it out. We may have to come back to it. The following video will give you a sense of the game play in which the first level trolls attack you with”feathers” no swords 🙂 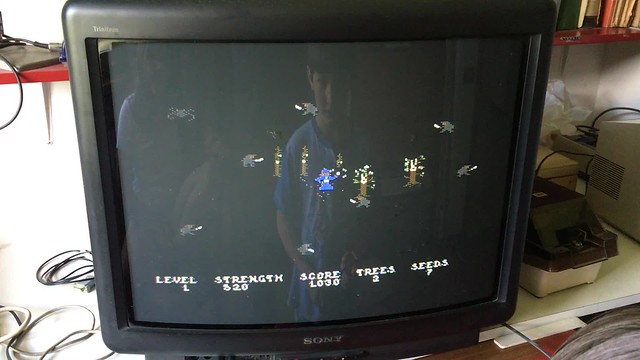 We then loaded Forbidden Forest and that was an exercise in figuring out how to shoot a bow, but once you master that the game is fun as hell. It also was a bit 8-but graphic, in the following video Tommaso’s archer gets devoured by giant spiders, and there is some blood! 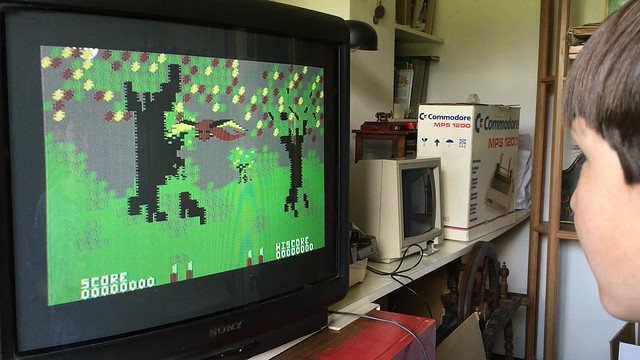 We then hit pay dirt with a C64 version of one of my all-time favorite video games Yie Ar Kung-Fu! The kids also loved this one, and we spend some time working through Nuncha. it is actually a bit more difficult than the arcade version cause you only have one joystick and your opponents seem to realize this 🙂 But discovering this on a random diskette made me realize just how many games were made for the C64! 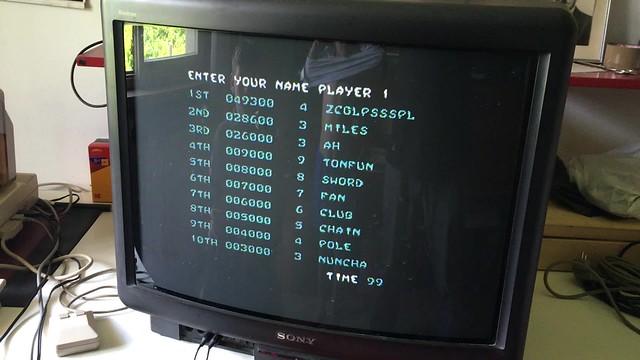 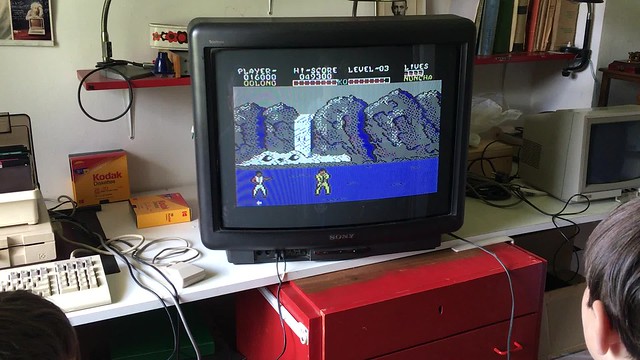 Playing Yie Ar Kung-Fu rounded off the first day of exploring the C128 quite nicely. We have it all setup and it seems to be working fine. My next steps will be to start getting access to the tons of games available online by securing myself some hardware that interfaces between my machine and the C128. I’ve already ordered uIEC SD disk drive from RETRO Innovations that will allow me to put files on an SD card and have the Commodore 128 read them. That said, I’ll need to try this all out before I can say much more—but I am sure they’ll be a blog post or two more about all of this 🙂 I had a total blast exploring the world of C128/C64 with my kids yesterday, they are a breath of fresh air because they don’t fetishize it in the same way I do. My youngest refers to it as the “big computer upstairs,” and he is taken with the games. He’s even memorized the LOAD"$",8 and LIST commands to see what’s on a disk, Not to mention LOAD"GAME NAME",8 and RUN commands to get the party started. I’m looking forward to getting deeper into this stuff over the coming months, I need a healthy distraction from all the computer work I am doing 🙂

This entry was posted in Commodore 128, fun, video games and tagged c128, games. Bookmark the permalink.

10 Responses to Getting the Commodore 128 Up and Running