Gulou or, Public Scholarship in the Digital Age 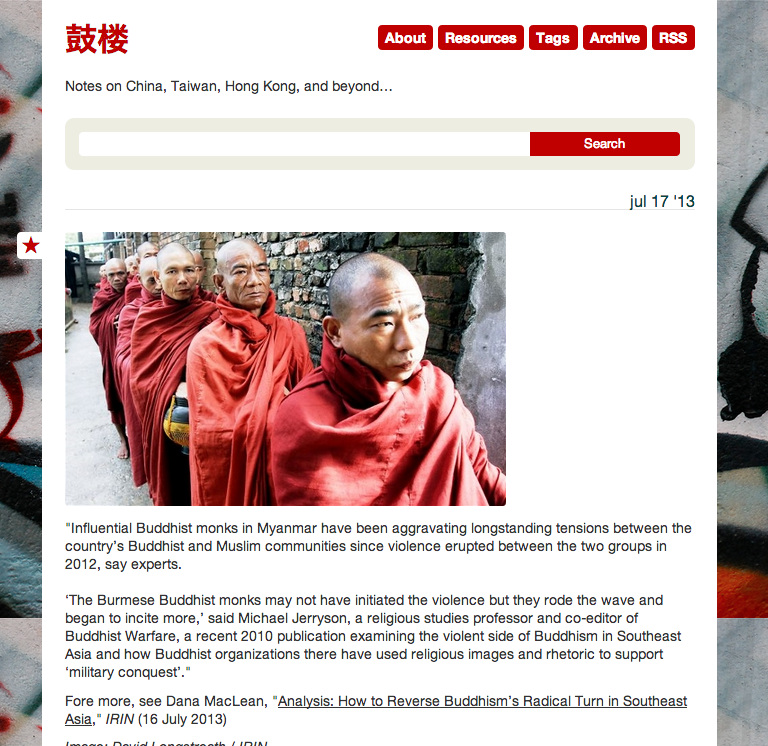 This post is long overdue, and if I hadn’t checked out for a couple of months in April and May it would have been blogged on the bava a lot earlier. In fact, it’s criminal it hasn’t been broadcast more widely around the UMW community because the fact that Sue Fernsebner, a Chinese history scholar and faculty member in the History department at UMW, has a blog that has become a spotlight page for news on Tumblr is a kind of a big deal. Sue lays out the whole phenomenon far better than I ever could in this post. I love the way she ponders the implications of her blog being featured alongside major mass media new outlets:

I’m just beginning to ponder the implications. What does it mean that an individual’s site—one person’s own, simple Tumblr—is beside the site of a news agency like, say, Reuters, a major news organization founded in 1851 (and now owned by The Thompson Corporation)? More immediately, at least for a scholar of China and Asian Studies, what does it mean that a microblogging, pop media site such as Tumblr is interested in featuring stories from that region at its top-most news page?

I love this! And if I might be so bold to try and answer some of these questions, I would argue it represents a new era of the scholar. I was first introduced to the idea of the public scholar back in the late 90s when I was at the CUNY Grad Center. The definition I heard was that a public scholar was an academic  who might give a few public lectures  a year and/or  write an article or column for a well-known, popular magazine. Morris Dickstein and Luke Menand (both big names in the field working in the English department at the Grad Center at the time) are considered public scholars as such, but it seemed to me that their scope was only public in a rarified , NY intellectual cultural frame. I don’t mean this as a criticism—I’m a huge fan of Dickstein’s—as much as a basis for some of the limitations of the idea of a public scholar in the academy before the web.

What happens when a scholar from UMW,  a small public liberal arts university all too often overlooked when it comes to scholarship, can turn a simple, free resource sharing site on Tumblr into a featured, popular news site read by tens of thousands of people daily? That’s pretty mind blowing to me, and given how cool and awesome Sue is (I mean she’s pioneering animated GIFs as film analysis in her Chinese film class!) it couldn’t have happened to a better person. We have had an amazing group of fellows in the Domain of One’s Own Faculty Initiative this past Spring, and while Sue’s work with Tumblr pre-dates that initiative, but still I would like to claim her as the poster child for Domain of One’s Own. But, in the end, that might turn into a faculty cage match given how many faculty stepped  up their game to Crouching Tiger levels of awesome! 😉 I love featuring faculty work, it has been too long since I have, maybe it’s time to start featuring just what all those amazing faculty fellows did as part of the Domain of one’s Own initiative.

2 Responses to Gulou or, Public Scholarship in the Digital Age