Y U NO Domain of One’s Own? 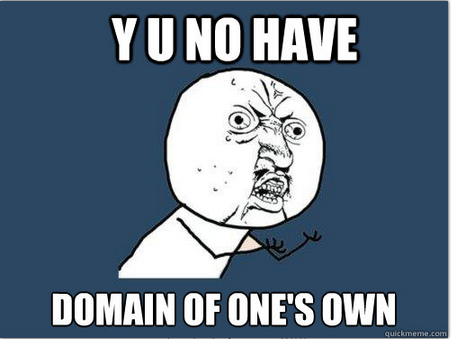 Tim Owens just framed out in this post how we can scale the possibilities of UMW’s Domain of One’s Own project to just about any professor from any school that might be interested. What’s interesting here is that the “we” in that last sentence doesn’t really refer to UMW, or even DTLT (although both helped to make it possible), rather it begins to define a broader community of folks who might be interested in pooling their edtech resources to actually help faculty and students experiment with the web beyond the LMS (which, ironically, is quickly being conflated with MOOCs).

Think of this for a second, with the Reclaim Hosting idea Tim lays out in the above linked post, we’re essentially providing a space for interested teachers/faculty (and by extension students) to experiment on this  hosting space for free. But that alone wouldn’t be nearly enough, you can get free hosting elsewhere. What we want to do beyond that is use this space to provide support, encouragement, and, ideally, form a community of people that are interested in working collaboratively.  What might it mean to openly imagine and frame a course alongside a community of people who’ll help you do it? Would it look like a roving band of institutionally-agnostic, piratical ed tech folks who’ll support you in rethinking how you use technology to augment teaching and learning in your course? I hope so!

Brian Lamb has referred to this model as a kind of co-op for edtech people who don’t have the resources locally. Why not share those resources out that are most difficult to get? And if I were a betting man, I would wager moral support and encouragement from a community of folks who are interested in similar experiments is the most valuable resource available for just about anything you’re trying to do. I can’t really think of a precedent for this kind of community that builds good will through good deeds, can you? Was it #ds107, or something like that? Anyway, we’re taking our cue from Brian Lamb, and offering up one little bit of what we can, free-hosting and support for any teacher/faculty interested in experimenting with building a course there (and we define teacher/faculty and course as loosely as possible, so don’t feel excluded).  In fact, we aren’t necessarily new to this, back in 2008 we did something similar for Longwood University with UMW Blogs.

We can do this over the next five months for free in large part thanks to a flash grant I received from the Shuttleworth Foundation by way of David Wiley.  THANK YOU! This is just one of three micro-projects we will be experimenting with thanks to this grant. This particular experiment is focused specifically on providing support for using a free, open source toolkit in the form of LAMP web hosting for interested faculty. The other two facets will be focused on 1) a series of plugins for ds106 that makes building a syndicated course space that much easier and 2)  a broader, conceptual framing of what such a distributed architecture might look like for controlling one’s data online, and how might we cobble/build it.

This entry was posted in Domain of One's Own and tagged domain of one's own, ds106, reclaimhosting. Bookmark the permalink.

5 Responses to Y U NO Domain of One’s Own?