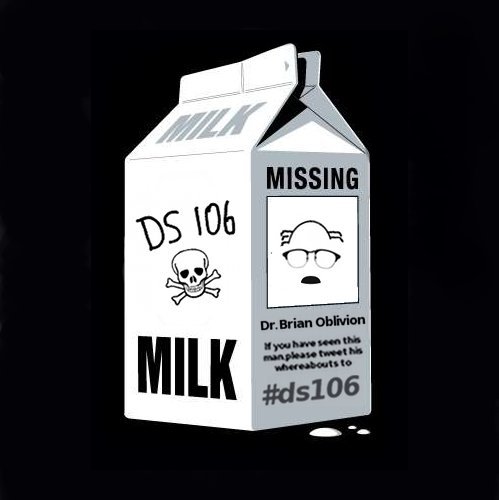 There have been a few milk container experiments for the “Missing Persons” poster assignment, so I decided to try my hand at in order to help get the word out about the Dr. Oblivion’s disappearance.

One thing that blows my mind about the missing persons milk container campaign of the 1980s—which I am assuming everyone who chose this milk container is alluding to—is how morbid it is. How did milk during the 80s become associated with every parents worst nightmare? I mean how did parents of the 1980s deal with this on a daily basis? To wake up every day to the violent reminder that your own kids could be next—talk about a campaign of fear and alienation. How many kids were actually save as a result of that campaign? I’d really like to know.

Anyway, here is a bit on my process for creating this poster. I found an original milk container t-shirt playing on Lost done by GLENNZ here. I grabbed that and brought it into GIMP and started changing it. I really only needed the shape of the milk carton to save me some work, and if GLENNZ has an issue with me using the base of his design I’m more than happy to take it down. That said, finding the work of others as a starting point for creating posters, postcards, album covers, or any of the other visual/design assignments is often very useful —just be sure to give those you are “borrowing” from credit—imitation is the greatest form of flattery.

If you want to experiment with GIMP, the best way at it is to figure out how layers work first and foremost.  There are a ton of tutorials out there, and remember that the Mac and PC GIMPs are rather different looking and operating. And if you already have Photoshop, well I doubt you’ll be using GIMP. For my next assignment I am gonna use Aviary to see how that works and hopefully provide a more thorough tutorial. God save Oblivion!

This entry was posted in digital storytelling and tagged DesignAssignments, designassignments142, ds106. Bookmark the permalink.

4 Responses to Got Oblivion?