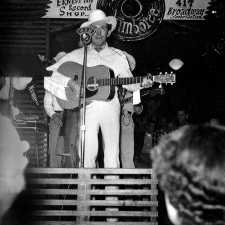 Dave the Spazz of WFMU’s Beware of the Blog just posted on Hank Williams, I can’t pretend to know too much about Williams, but what I’ve heard of him is pretty phenomenal.  So the recording of a live performance by Williams in Sunset Park, PA on July 13th, 1952 was pretty educational. From his music I always imagined him as this dark and brooding figure (which I’m sure he was to some degree), but what’s great about this recording is how funny he is.  He tells a joke/anecdote about a guy who was in the doghouse with his wife, so he sent her a letter enclosing a check payable for a 1,000 hugs and kisses. Only to receive a letter back from his wife letting him know the iceman cashed that check this morning 🙂 Also, the music is pretty awesome as well. And perhaps a hymn is in order, “I Saw the Light” is wonderful. There is also a bit where he’s pushing his song books towards the end of the performance, offering autographs. Seemed like quite a different, personable venue for an icon of 20th century popular music.

This entry was posted in Uncategorized and tagged Country, Hank Williams, music. Bookmark the permalink.