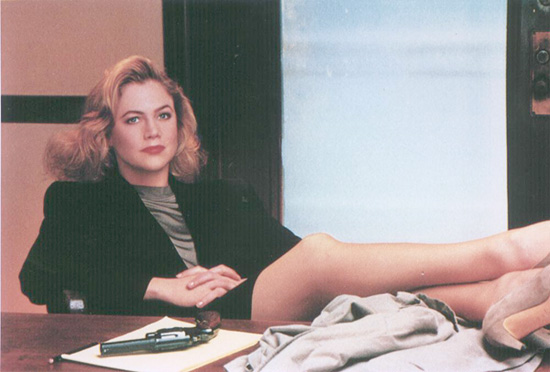 Tonight was a very fun class, #emoboiled (my new moniker for the class thanks to Dr. Garcia) always makes me happy. We spent a most fo the first forty minutes talking smack (I was in rare form tonight, as were they) and revieweing the progress of the Wikipedia research projects, more on them in another post. The last 40 minutes were spent discussing Sara Paretsky’s first novel Indemnity Only (1980) —special thanks to Joe Ugoretz for recommending it—we’re loving it.

What I can’t get over about Indemnity Only is how much it frames the shifting cultural sensibility over the course of the semester. Over the first eleven weeks we’ve read Hemingway, Hammett, Fante, Cain, Chandler (well, we did watch Double Indemnity and Strangers on a Train), Highsmith, and Himes—each framing some part of the decade they were writing within. This worked well for contextualizing each of the novels, but they all seemed somewhat of a piece and gradually giving way to another historically. That is not the case with Indemnity Only at all. Moving from [[Chester Himes]’s Cotton Comes to Harlem to Indemnity Only feels like we crossed into a whole new universe of hardboiled—and I personally love it.

Paretsky’s attention to life’s details when it comes to V.I. Wasrshawski is really compelling.I still have to finish the novel, but the ways in which this book ushers in the post-Union era, the Reagan 80s, and Jane Fonda’s Workout video franchise. It is startling how much this book seems a product of its moment, and for that reason is in many ways that much more resonant today. I also have to recognize that this is the first novel I was alive and had memory when it was written —which may impact my reading. But rather than just say all this, let me give you a couple of examples of what I mean.

Warshawski is a Private Detective, but most of her cases are industrial cases that deal with businesses and involve corporate clients. What struck me about this is the moment when she talks about trying to round up a printer for the $1500 he owes her because she had “saved his firm from being muscled out by a national chain last spring” (2). This idea of saving an independent business from a corporate chain seems like an all too appropriate reflection of private investigator work in the late 1970s, early 1980s. For the case that starts the frame for the book, she was “hired to find a person so her boyfriend would go to business school” (6). Business school? Really? That is such a phenomenon of the 1980s, right? Risky Business was all about this!

Warshawski is a PI that actually exercises at least four days a week. Chapter 2 opens up with ehr taking a 5 miles run around lake Michigan and commenting that her lack of discipline “makes it easier to exercise than to diet.” At this point I am waiting for the Weight Watchers calorie count book to get pulled out.

She drives a Chevy Monza. There is no limit to the awesome of that detail.

Another thing I found odd, but compelling, was when Warshawski throws out crazy demographic stats about college and income when walking around the University of Chicago campus:

Supposedly a fifth of the student body came from homes with an annual income of fifty thousand dollars or more, but I’d hate to use looks to decide which fifth. (12)

And on just the next page she talks about “the Wimpy’s I remembered in the nearby shopping center had been replaced by a cool, attractive, and quasi-Greek restaurant” (13). Strip malls, with quasi-ethnic food dotting the landscape of this novel? I am really struck by how of the 1980s moment this book is.  She references Edward G. Robinson in the first part of the novel (and Philip Marlowe a bit later), and these are just a few examples from the first thirteen pages of both pop culture and a hardboiled nostalgia for the tradition. There are many, many more. In many ways it is not dissimilar from the joy and satisfaction I get from reading another master of this kind of pop cultural detail emerging as a writer at this moment, Stephen King.

P.S. — On page 14 she describes a stereo system setup with a Kenwood turntable and JBL speakers to indicate someone has money. I don’t even know if I can begin to describe for you how 1980s that is unless you lived the 80s. Warshawski #4life.

This entry was posted in Hardboiled and tagged emoboiled, hardboiled, Indemnity Only, Sara Paretsky, V.I. Warshawski. Bookmark the permalink.