Harryhausen’s Dynamation is Dynamite on the Big Screen

Yesterday is one of the moments as a parent I’ve been waiting impatiently for: taking my kids to a Ray Harryhausen film in beautiful 35mm on the big screen! And let me tell you it was worth the excruciating wait! My 5 year old was cuddled up in my lap most of the time, while my 7 year old was hopping up and down at the edge of his seat in sheer joy the whole film. Despite what people say to the contrary, you can live vicariously through your kids  🙂

We saw Harryhausen’s The 7th Voyage of Sinbad (1958) matinee at the Library of Congress, Packard campus in a real theatre with other people and a curtain that opens and closes. What’s more, the programming was pretty genius, because right before the feature film they showed the Bugs Bunny cartoon “Ali Baba Bunny” (1957) which was a brilliant pairing and introduced my kids to another masterpiece in its own right.  What’s more, before the film a Library of Congress curator talked to the audience a bit about the Dynamation process, though we arrived a bit late so we missed most of this, which is a shame. However after the film we picked up a hand-out that illustrated the Dynamation process innovated by Harryhuasen, which is basically an early version of green screening. Oddly enough I found that same hand-out online here, and figured I would reproduce it below for anyone unfamiliar with the process:

The process was simple but very effective.  He projected a live action image onto a rear screen in front of which was placed the animation table with the model.  He would then place a glass sheet in front of both.  When the live action plate had been shot Ray would establish where he wanted to make his matte line and so by looking through the camera viewfinder he would re-establish that line and with a wax pencil on the end of a stick, follow that line by drawing it on the glass.  When he was satisfied that the line was accurate he would then paint out, with black matt paint, the lower section, below the line.  He would then photograph the animation of the model reacting to the live action on the plate.  Afterwards he would then create a second pass in the camera to reinstate the lower previously matted out section so creating a combined image of the creature seemingly as part of the live action.

Interesting how this approach is a pre-digital means of creating layers of animated action and art that they could use to create the illusion of live action and animation without the use of split screen. In many ways this process is the proto-type for a visual layering of elements that is a commonplace in creative applications for manipulating images, sounds, and video (i.e., Photoshop, Audacity, Final Cut Pro, etc.). And while The 7th Voyage of Sinbad was not the first time Harryhausen used this rear screen technique (that would be in 1952 with The Beast from 20,000 Fathoms),  it was the first time the term Dynamation was used to describe Harryhausen’s innovative stop-motion animation. In fact, there were a few firsts associated with this film: it was the first of four scores Bernard Hermann wrote for a Harryhausen film (which many suggest rank among his best); the first of three Sinbad films by Harryhausen; the first, and only, Harryhausen film selected for preservation by the National Film Registry (Might Joe Young has not made the cut yet!); and the first time audiences encountered Harryhausen’s animated skeleton—which would make an armies return in Jason and the Argonauts (1963). 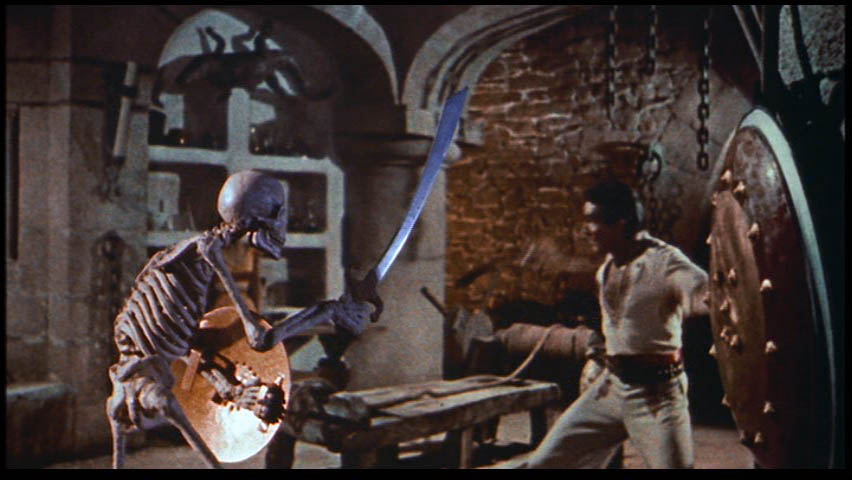 What’s wild about Harryhausen is that he is that rare case where you can call the movie “a Harryhausen film” even though he is credited for the special effects rather than as the director. I think that’s because most of the filsm he was a part of  are  first and foremost vehicles for his brilliant monstrous conceptions—and The 7th Voyage of Sinbad remains so legendary because it contains quite a few classics that serve as the basis of many of the monsters in films to come. The most memorable monster from the film is the Cyclops which was based in part on Ymir from Twenty Million Miles to Earth (1957) and would be the inspiration for later creatures like the Centaur in The Golden Voyage of Sinbad (1974) and the Trogolodyte in Sinbad and the Eye of the Tiger (1977). 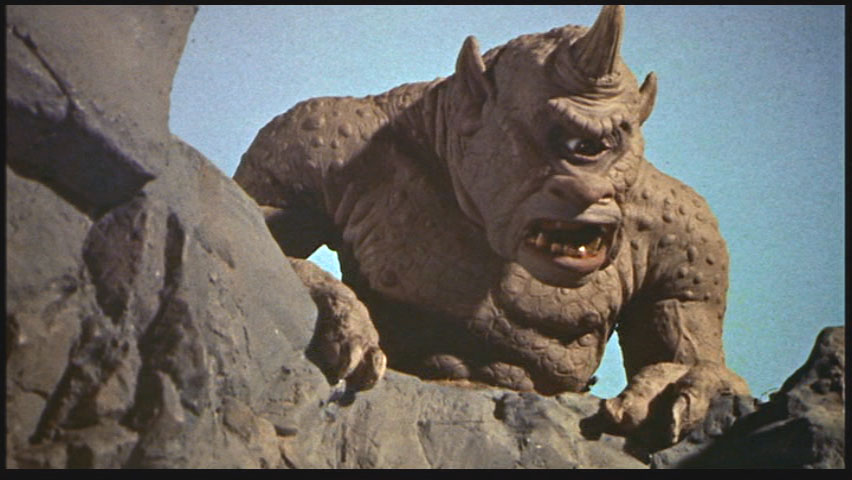 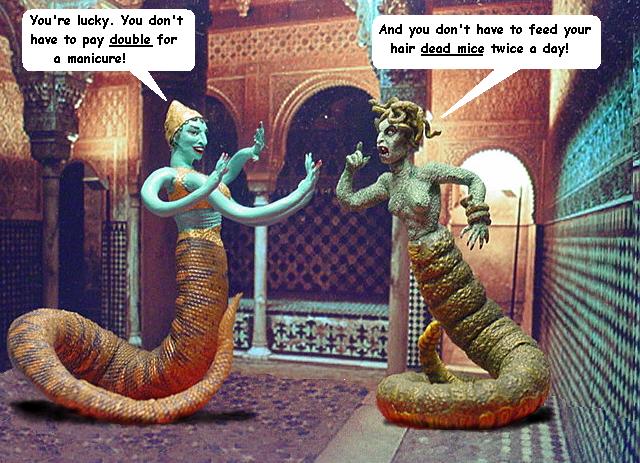 There’s also the two-headed hatchling and adult Roc that would be the inspiration of his later Pterodactyl scenes in One Million Years B.C., as well as the Dragon which reminded me a lot of the Hydra from Jason and the Argonauts.

Finally, as I already mentioned, there was the Skeleton with sword and shield that would prove so popular that four years later Harryhausen would animate a whole army of them that for many mark his crowning achievement in the annals of animation.

In short, it was amazing, and a little more than two weeks from now on may 24th the Packard Campus will be screening the 1925 classic The Lost World that features the work of Harryhausen’s mentor and the original stop animation pioneer Willis O’Brien. It’s really awesome to live so close to a film treasure like the Library of Congress, Packard Campus—-and this is really getting me fired up to starting working on my idea for an online film class that centers around the Packard campus as a resource.

This entry was posted in movies and tagged LOC Packard, Ray Harryhausen, The 7th Voyage of Sinbad. Bookmark the permalink.