Have You Seen Nobody? 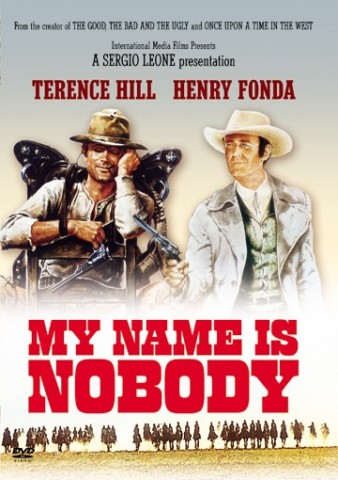 Last night we watched the 1973 mock western My Name is Nobody. It’s a great spoof on the Western as well as a lovingly playful homage to Sam Peckinpah’s The Wild Bunch (1968). In fact, the amorphous “villain” in this film is a rag-tag group of 150 bandits that are referred to as the “Wild Bunch” throughout, and there is an equally insane shootout to end the film replete with slow motion deaths as an overt nod to Peckinpah.

It’s also Henry Fonda’s last Western, and he remained one of the greats of the genre right up to the end—but for me it’s the Italian comedic actor Terence Hill that makes this film. His slapstick humor paired with bizarre moments wherein magical realism meets the Western by way of film speed manipulation makes him truly the fastest draw in Western film ever. And below is the celluloid proof in the form of animated GIFs.

So fast that saddle doesn’t even hit the ground.

Gun, Slap, Gun, Slap, Gun….
The other thing I always trip out on about European created Westerns is the way these films stand outside of history. And while My Name is Nobody is shot on location in the Western U.S. —there’s still this sense of it’s being outside of history, almost mythologic.  Not unlike watching some of the  Sword-and-sandal films that dominated the Italian b-movie industry before the explosion of the Spaghetti Western in the 1960s. Anyway, if you get an opportunity I highly recommend this one, it’s over-the-top Italian b-movies at their best, and Sergio Leone’s influence looms large on the direction and you can’t get Ennio Morricone’s soundtrack out of your head, as usual.
This entry was posted in movies and tagged ennio morricone, Henry Fonda, movies, My name is Nobody, Sergio Leone. Bookmark the permalink.

5 Responses to Have You Seen Nobody?