Both before and after my time working on Connected Courses at UC Irvine, I had the privilege of hanging out in Los Angeles proper—the city of angels. LA is near and dear to me, I spent my formative years there from 1990 to 1997, and much of who I became as an adult was forged in that smoggy furnace of film culture. I plan on spending more time in LA in 2015, and given that my good friend Mikhail Gershovich and his family recently moved there—I now have a family to impose on! 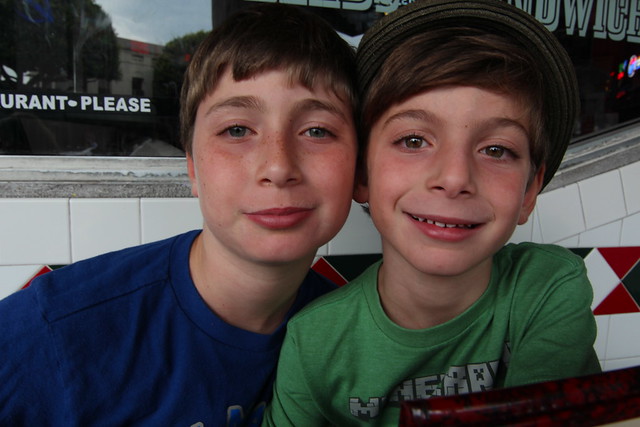 Jonah and Eli enjoying a slice in Larchmont

In fact, I already have, and as usual Jennie and Mikhail—as well their two sons—were awesome. In fact, after being picked up from the airport by Mikhail and seeing his fetching hat, getting my own was one of the first things I did, right after eating Cactus tacos (yum) and seeing Dawn of the Planet of the Apes (suck). 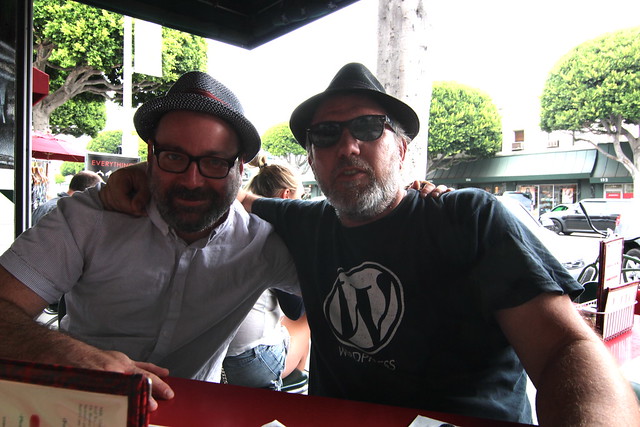 Once I secured the hat and we ate some pizza we went on a tour de force trip from Larchmont to Highland Park to Simi Valley and back again to Hollywood Forever Cemetery. It was an awesome day. We visited Galco’s, an old school soda pop shop that is “dedicated to the art of soda pop.” They sell a variety of sodas, but only ever in the bottle. The proprietor is a soda evangelist, and he was a truly compelling man. He has a convincing argument as to why plastic and aluminum packaging have effectively eroded good tasting soda, responsible for the limited selection of mediocre pop we have access to today. It’s as if he were talking about Learning Management Systems. Who Knew? 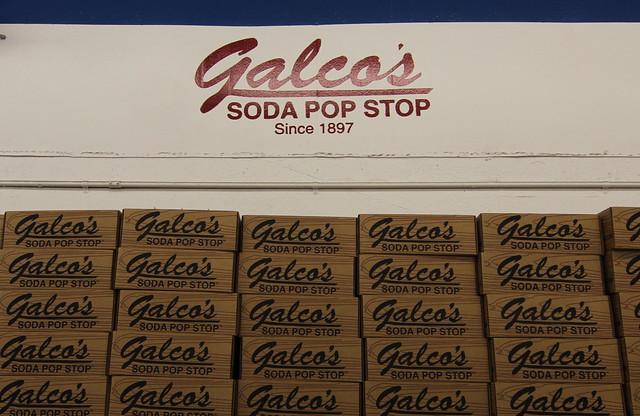 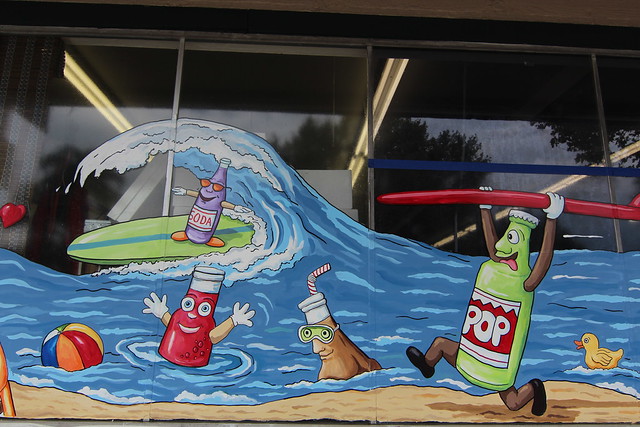 Galco’s window mural featuring soda pop art was being painted while we visited. 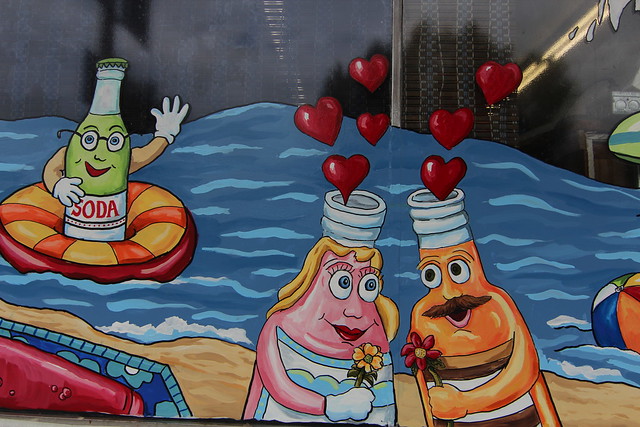 Scenes from a soda pop mural at Galco’s 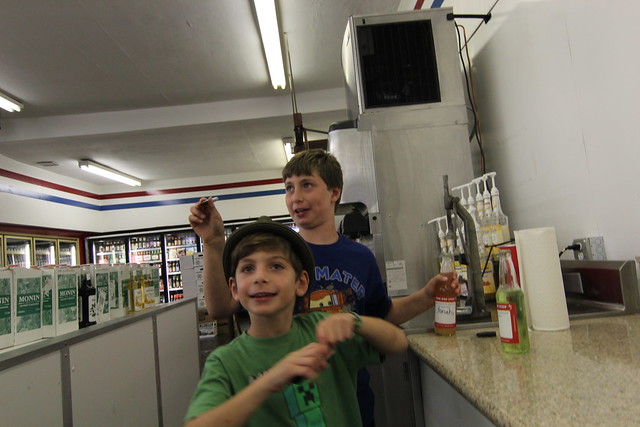 Jonah and Eli DIY their soda pop at Galco’s 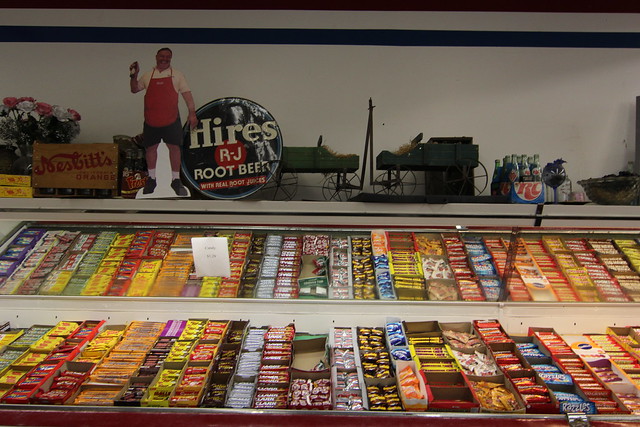 It wasn’t just soda either, Galco’s had an awesome selection of old gold candy

After our stop in Highland Park at Galco’s, we headed to Simi Valley to drop off the kids at the grandparents,  which provided me the opportunity to see Mikhail’s boyhood home. It’s a sign of age when you’ve had a friend for over 15 years but have no idea of where and how they grew up. It felt like I was filling in the details, and there is no greater satisfaction than having friends long enough to get a broader and deeper sense of where they came from. 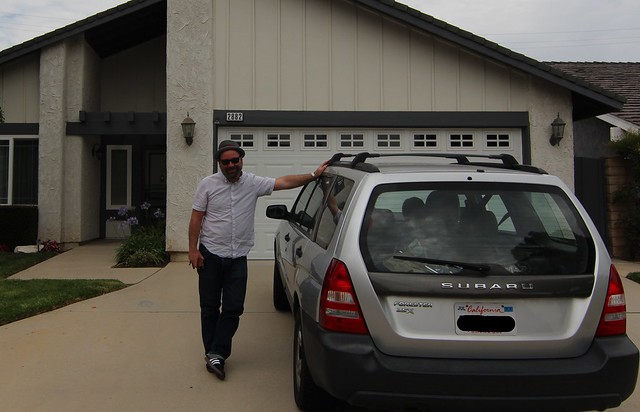 Mikhail in front of his boyhood home in Simi Valley

After talking with Mikhail’s parents about his patio—he really needs to pave up to the garage—he showed me a pretty awesome skatepark in Simi Valley called SkateLab. It was founded by Scott Radinsky, who is not only a skater and Nardcore punk rocker, but also an accomplished Major League pitcher. Skatelab was the first of its kind indoor park, and is also the home of a Skateboard museum as well as the Skateboarding Hall of Fame—how could Rodney Mullen not be part of the inaugural class of inductees? 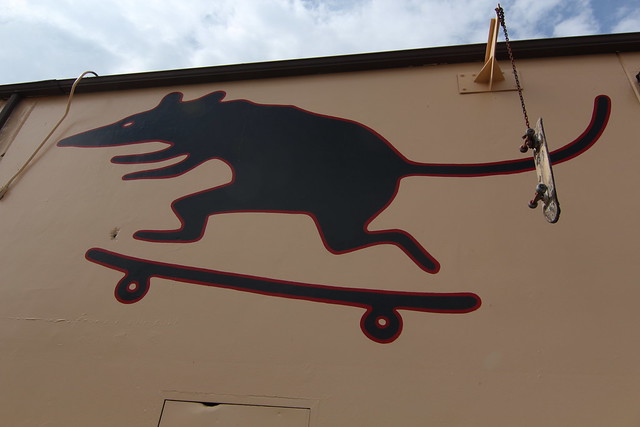 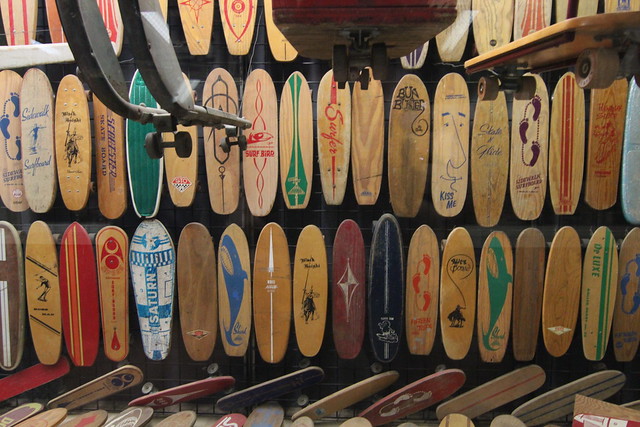 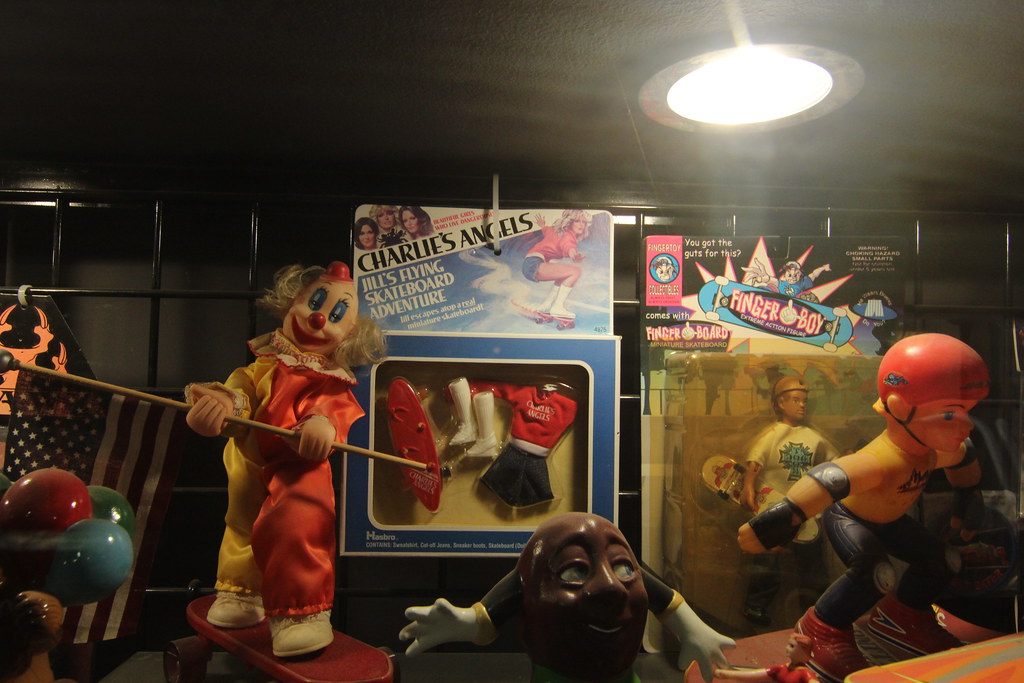 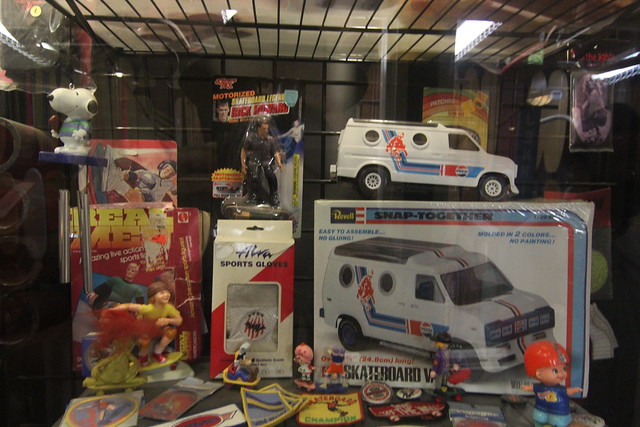 I was a skater in the late 70s through the 80s, and so the wall of decks broken down by decades was a nice walk down nostalgia lane. Neil Blender, Kevin Staab, Christian Hosoi, Gator Rogowski, and many more. 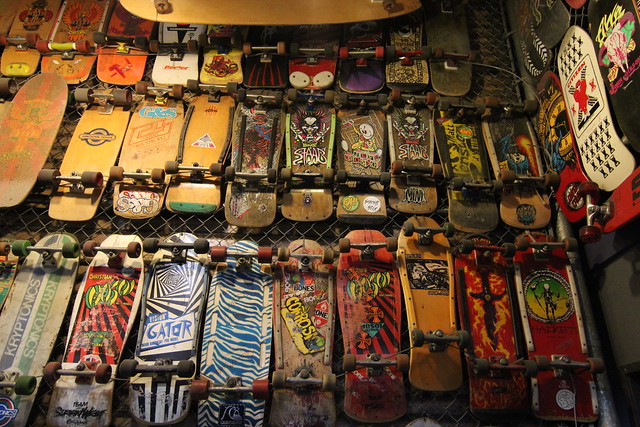 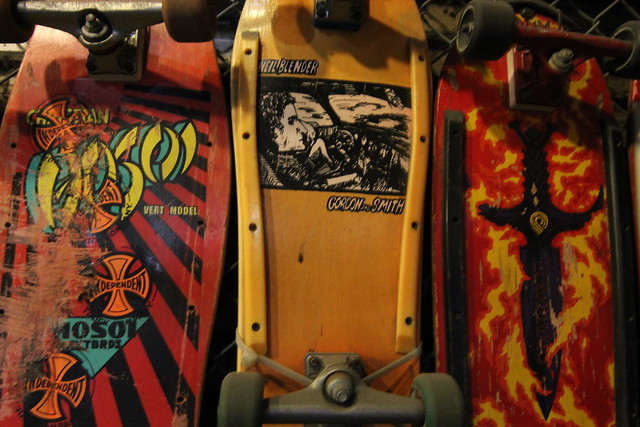 Close-up on skate decks from the 1980s 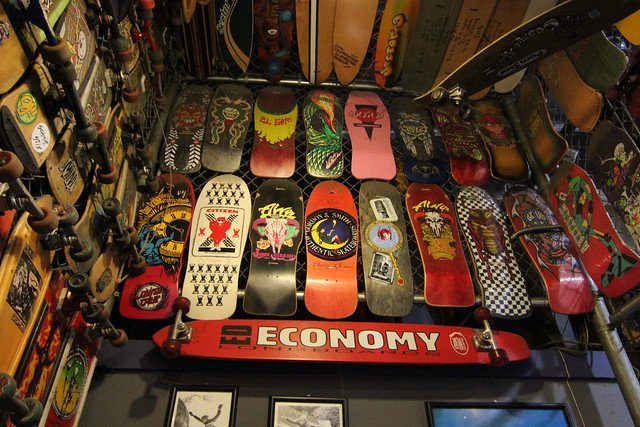 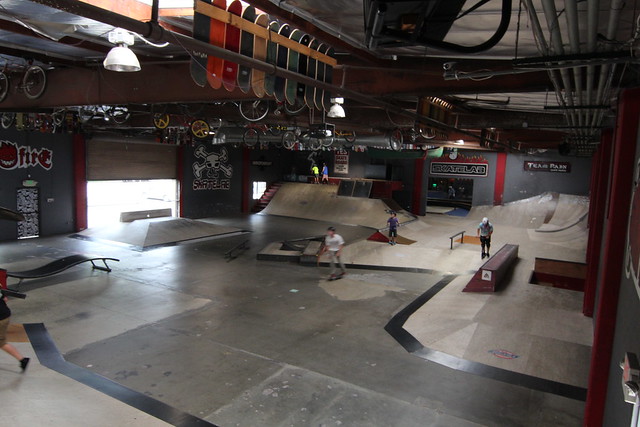 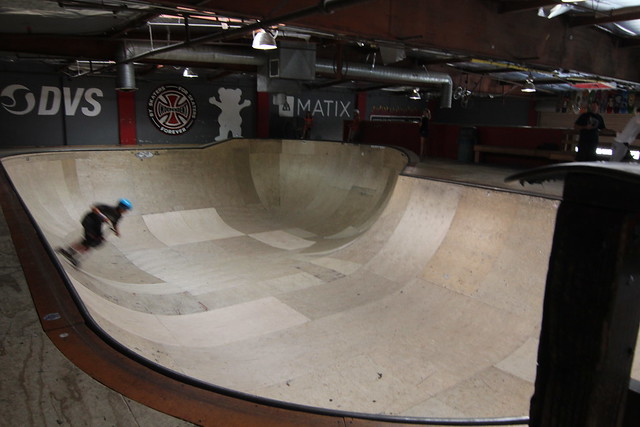 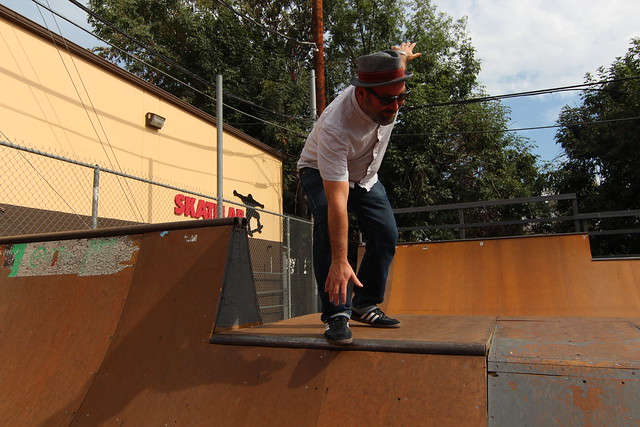 Mikhail drops in on the half pipe at Skatelab

After I took in about as much as I could take of 1980s skating nostalgia, we headed back to Hollywood Cemetery for a reminder of where we are all headed 🙂 Including 1970s and 80s punk icons Johnny  and Dee Dee Ramone. My camera ran out of juice before I could capture Dee Dee’s headstone, which was far less ostentatious than Johnny’s. 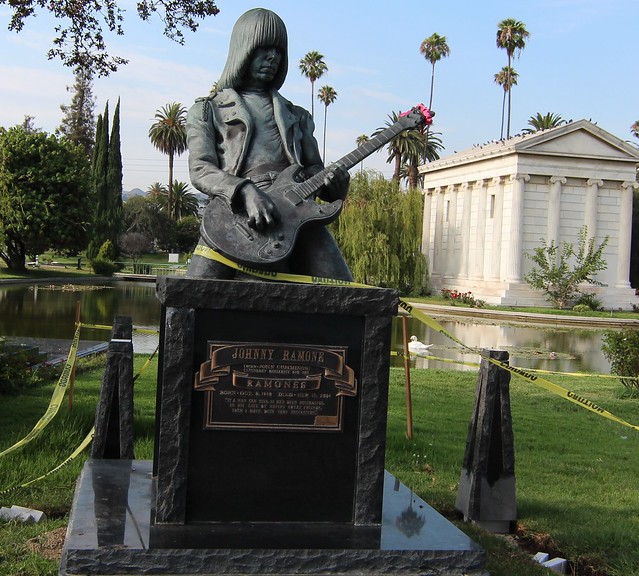 There was also Mel Blanc’s grave, the man of 1000 voices from my childhood. 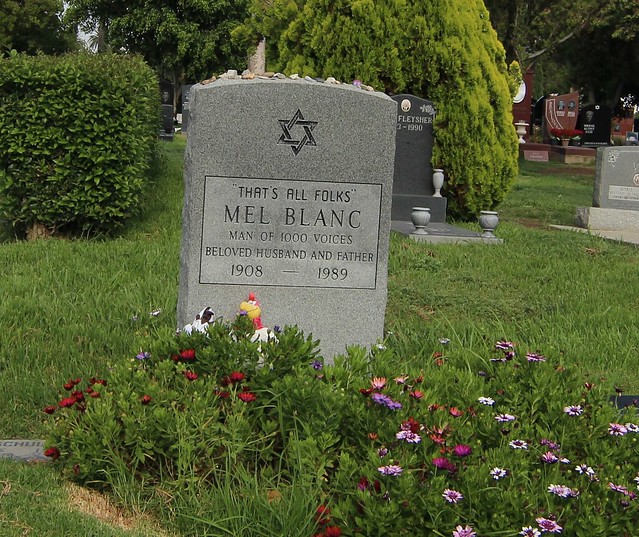 There were a ton of other people buried here, but one of the more recent tenants is Mickey Rooney, who died in April. 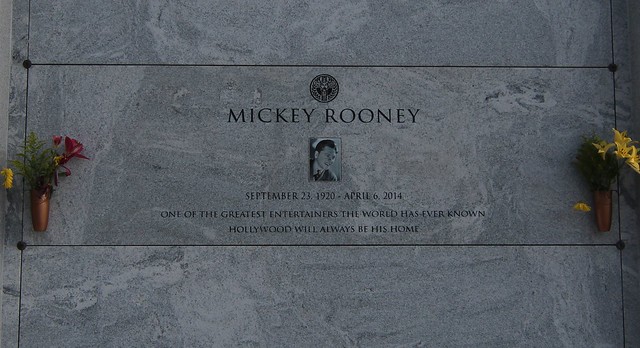 And that was just one day! I have much more to share about my trip including the detials of the Connected Courses bootcamp, the Reclaim Your Domain Hackathon, my trip to CSU Channel ISlands, as well as my return to UCLA. But I have to accept I’m gonna need a bigger boat, or at least a few more posts.