How not to monetize WPMu

Stephen Downes linked to a post recently by James Farmer discussing how he successfully monetized WPMu through Edublogs. And while the post might be an interesting read of trial and error for those who want to monetize WPMu, one of the things that is ellided is how Edublogs practically forced non-paying customers to upgrade by including some of the most god awful ads as content links you’ll ever see. And while there was an attempt to downplay this by pointing people to a forum post about this very issue months before the random content links were rolled out in earnest, the fact remains it seemed pretty underhanded. And while the terms of service allow for such a sudden shift and yadda yadda yadda, the relationship Farmer defined with the educational community was one who was giving back—and there is no question he has done this extensively on many accounts and I, for one, have benefited from it.

In fact, I have no issue with his charging folks for a service like Edublogs, it has been a solid mainstay for the educational blogging community, and what Farmer and his crew have done with WPMu is impressive to say the least. Moreover, I completely understand that he is a businessman, and while I really don’t find monetizing the web that interesting, I’m acutely aware many of us have “families to feed.” Regardless, I wasn’t too crazy about the way inline ads went down. If, as a for-profit business, you are gonna go this route being above board and transparent about the whole thing would have gone a long way. I mean Edublogs announces everything from when they release a new theme to each time the Edublogs crew changes their underwear, you’d think such a drastic change in policy would get at least a little bit more press. But, there were no email announcements and not posts on the main Edublogs site until the new monetizing plan was worked out. But, to be fair, there was a forum post about the topic months before the ads were rolled out in earnest, but that is different then a more general, global announcement that inline ads would become a means of creating a revenue stream that Edublogs would be relying more heavily upon. 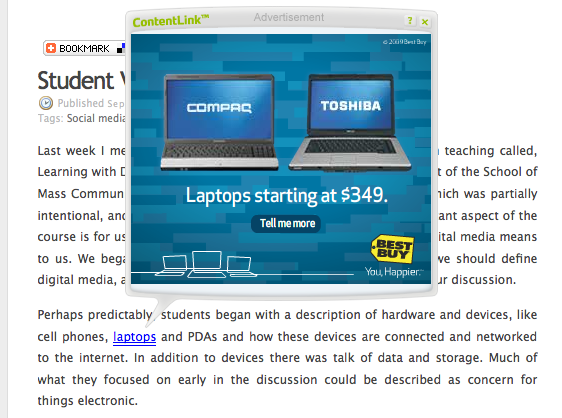 Amazingly, to the Edublogs crew’s credit, they seemed to have found their way through a potentially dangerous decision relatively unscarred, even though the inline ads are still being served as far as I can tell (the image above was taken yesterday). And while bloggers like Chris Sessums and Steve O’Connor (to name just a couple) have already raised a number of valid concerns and questions far better than I ever could, there was no response from the Edublogs staff. But hey, let bygones be bygones, we all know the Edulogs crew need to get paid for their work because maintaining over 250,000 blogs that people have signed up for free-of-charge costs money and in these tough economic times money isn’t easy to come by. So, while I didn’t care for how they rolled out ads on Edublogs, I held my tongue for a bit because I wanted to see where all of it would go.

Well, as I mentioned already, two days ago Farmer posted his “How to Monetize WPMu” post which chronicles the trials and tribulations of Edublogs to turn a profit, a narrative in the tradition of one of those entrepreneurial fables that undergirds the great men and women of business theories. I found it irksomely self-promotional, but I’m guilty of that very thing—I just don’t make any money off of it— so I had to chalk it up to style and posturing. However, a follow-up post by Farmer referencing a comment by Matt Mullenweg on the original post caught my attention. And opened up yet another dimension of this whole story which might in many ways get to the root of the larger problems I have with monetizing WPMu when it is at odds with the basic values of an open source community, and this is at the heart of the tension where many of my own deep-seated concerns about monetizing an application like WPMu really boils to the surface. It brings back memories of almost a year ago when I announced that UMW had paid $50 for a plugin to get feeds off of sitewide tags that Downes called us out for paying for free software. Now, I understand that charging for a  service like Edublogs is different than charging for plugins based on GPL code, and to quote Downes in the comments on the OL Daily post about our $50 purchase when referring to the plugin developer who sold us the code:

I’d have more respect for him if he developed his own system and charged $50 for it.

Instead, he just rides on the backs on the many developers who have made WordPress a great *free* resource – what makes him so special, he’s the only one who gets $50 for the work.

And the point of my pointing to my own code is to trivialize his accomplishment – what he did isn’t such a great advance, it’s no fantastic thing so special it deserves the cash that nobody else gets.

Couldn’t that “instead he just rides on the backs of the many developers who have made WordPress a great and *free* resource” also apply to the WPMUDEV Premium service that James Farmer and Andrew Billets run? What makes them so special? Is it the capitalist narrative? The idea of being first? Isn’t the GPL the logic behind a social contract for sharing work freely that makes the very existence of Edublogs possible? I don’t know much about licenses and legal stuff, but Matt Mullenweg raises a concern about re-selling plugins in his comment response to Farmer’s post on monetizing WPMu that is worth reproducing here:

Long story short, it’s fine to sell things, including exactly what you’re doing on the site today, but insofar as the code links or uses any core WP functions it should also be GPL licensed.

Our CSS editing feature is not distributed to any third-parties, so it doesn’t need to be GPL any more than a wp-config.php file does, but no one has every asked me for it before and and if you want it we could take a few hours to clean it up for release.

The idea behind the GPL license seems to be if you are developing and selling code that uses core WP functions or hooks it should be freely available after you have gotten paid for your time and effort. So, re-selling code like they do on WPMUDEV Premium seems to be in violation of the GPL license. And this is where the whole monetization thing gets a bit questionable for me. At least one of the WPMUDev Premium scripts have been crucial to the work we have done with UMW Blogs—the Multi-DB feature—and it was well worth the money for us to get this code. Yet, do we run some real risks by re-selling code that was built on the backs of an open source community?—the greastest virtue of which is that this stuff is freely re-distributed for anyone to use and profit from as long as they are compliant with the GPL license—which basically boils down to acknowledging the work you have done is an extension of a larger community and that the individual narratives for monetizing this stuff should at the very least recognize this fact and act accordingly. What would happen if everyone started monetizing their WordPress plugins, code, and themes?  Well, that would be the death of this amazing experiment, and I think this is the worst possible model for monetizing WPMu—so perhaps we need to think twice before we celebrate the values of monetizing free software until we are sure the ways in which it is being done will ensure its survival as a “great *free* resource.”

8 Responses to How not to monetize WPMu