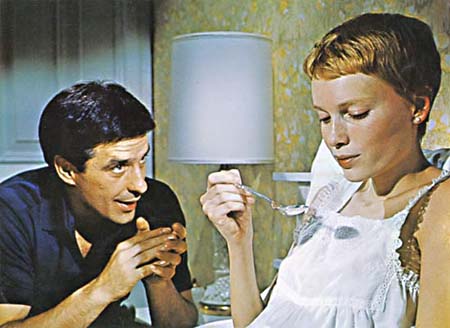 While up late last night with newly minted Tommaso, I couldn’t help but thinking about the character Guy Woodhouse (played brilliantly by John Cassavetes)  from Polanksi’s brilliant Rosemary’s Baby (1969). Thinking about how Guy sold out Rosemary (Mia Farrow) and his unborn child to the local Satan worshippers in order to further his acting career ranks him amongst the scummiest husbands in film.  Here is the scene where Rosemary figures out the whole craziness, and Guy tries to reassure her that he was promised she wouldn’t be hurt:

So then I started thinking, who are some other scummy husbands in film, and the list i starting to take shape: Jack Torrance (Jack Nicholson) in The Shining (1980) is a layup. Jerry Lundegaard from Fargo (1996) would rank right up there, and Jerry Blake (Terry O’Quinn) from The Stepfather (1987) is a candidate as well. And if we head back, I imagine Gregory Anton (Charles Boyer) from George Cukor’s Gaslight (1944) and Tony Wendice (Ray Milland) from Hitchcock’s Dial M for Murder (1954).

The best part of such a train of thought, is that it could go on for a long, long time….I can see it now, “The Top 100 Husbands from Hell.” I know it’s an odd moment to be thinking about such things, but for some reason Rosemary’s Baby, like The Shining, is just one of those films I can’t shake, and when it’s late at night with a baby in your hands, one needs things to think about. So, who would you add to the list?

This entry was posted in movies and tagged husbands from hell, John Cassavettes, movies, rosemary's baby, The Shining, The Stepfather. Bookmark the permalink.

7 Responses to Husbands from Hell: Guy Woodhouse from Rosemary’s Baby