In the Future Commodore C64’s will have 32 GB SD Cards!

I’ve been playing pretty steadily with my C128 setup, and I’m finding it’s a really consuming diversion. I’m working through some ideas for another exhibit along the lines of the UMW Console, and the C64 games are keeping my retro play quota filled. And while Cogdog is speculating about the future aesthetic of Reclaim Hosting‘s cPanel, I can assure you it has not gotten that bad….yet 🙂

In my last post about the C128 I talked about the ZoomFloppy device which bridges your Commodore computer with a contemporary computer via USB. This device is great for copying .d64 files (or disk images) to and from 5 and 1/4″ floppy disks. In this post I want to discuss the other piece of hardware I bought from RETRO Innovations alongside the ZoomFloppy called the uIEC/SD drive.* The uIEC/SD drive is similar to the ZoomFloppy in that it allows you to transfer files from your 2016 laptop to your 1985 C128. But rather than being a bridging device connecting your machine to the C128 to transfer files, this acts like an actual drive that you plug into the IEC serial port and use the cassette port for power. 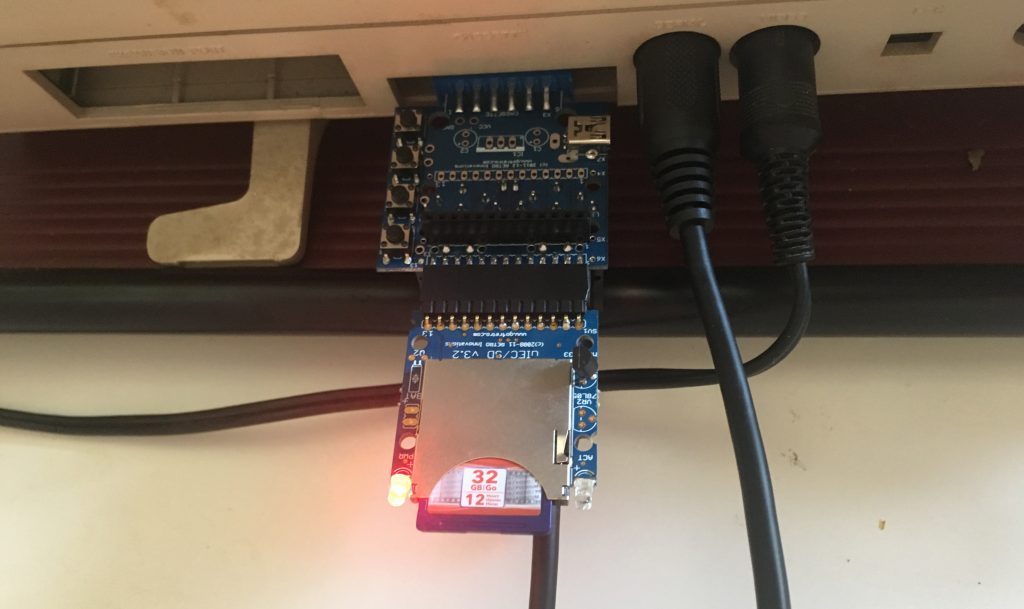 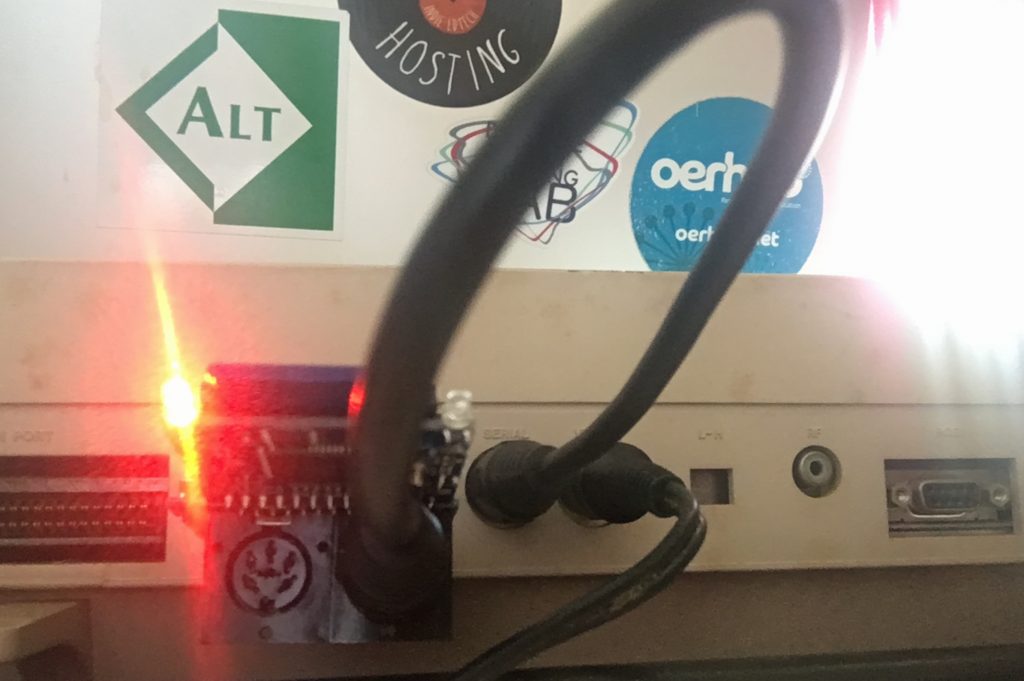 Here is another view of how it plugs into your C129 at eye-level.

The drive has two IEC Serial ports so you can connect another disk drive if you want, and the idea of having 32 GBs of space on a C64 (the mode it most often runs in) is pretty wild. There are presently 65,535 blocks free on that card! 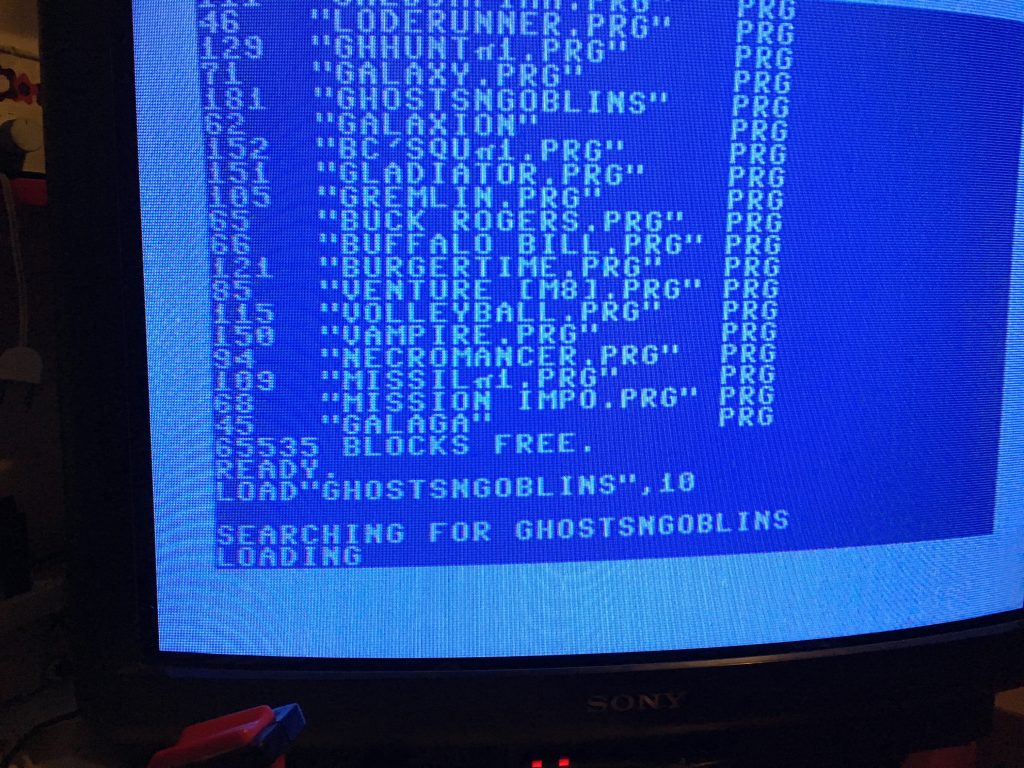 In fact, the above image captures a break-through for me with one of the conceptual problems I had with the uIEC/SD. After working with the ZoomFloppy I was thinking this drive would load .d64 files, but I was wrong (and confused). The .d64 files are disk images you write on a floppy that already have the program files set. But the uIEC/SD is a disk drive, so  you don’t burn images to it, rather  you copy and load program (.PRG) files. I was banging my head against the wall on this for a little bit trying to load .d64 files off the drive until I finally realized the flaw in my understanding. Slouching towards enlightenment. 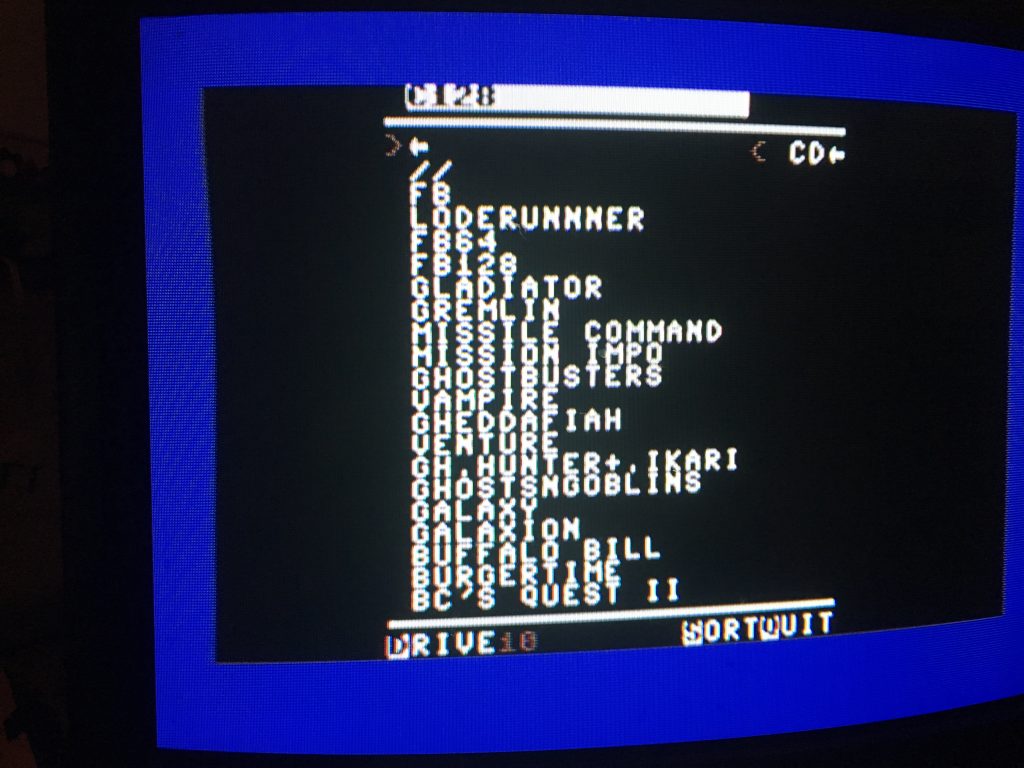 One of the programs folks were recommending you run on the uIEC/SD drive is the CBM File Browser. What is it, well an O.G. file browser just like the name says. You copy it on your SD card then load and run it. After that you’ll get the above interface that you can navigate around with your joystick or mouse (I love how the joystick is interchangeable with the mouse here). It let’s you choose between drives, sort files, and quit. You can also create directories on the SD card on your contemporary computer, and use this application to manage the potentially thousands and thousands of programs you could load on a single SD card. This made me realize that the d64 files were not files but disk images, why that hit me then I am not sure—that is something I am wondering because going through all this is like learning to compute again. It’s also an interesting lesson in just how much more receptive my mind is  to computational thinking than it was 30 years ago. What was utterly alien and bizarre 30 years ago seems totally logical, almost naturalized, for me now.

After this the power of the UIEC/SD drive was clear, virtually unlimited storage space for programs you can organize and load using a fairly intuitive browser. Modern computing in the making 🙂 My next question was now that I understand the difference between a disk image (.d64 files) and program files (.PRG), can I copy files to and from the uIEC/SD drive from my internal 1571 disk drive. This is the drive I insert floppies to write the d64 image from my computer to a disk via the ZoomFloppy device. So, can I copy program files (PRG files) from the uIEC/SD onto a floppy disk? From what I understand (granted I have already demonstrated the limits of my understanding here), I don’t think you can copy individual program files to and from your computer with the ZoomFloppy, it seems limited to copying only .d64 files. Anyone know otherwise? 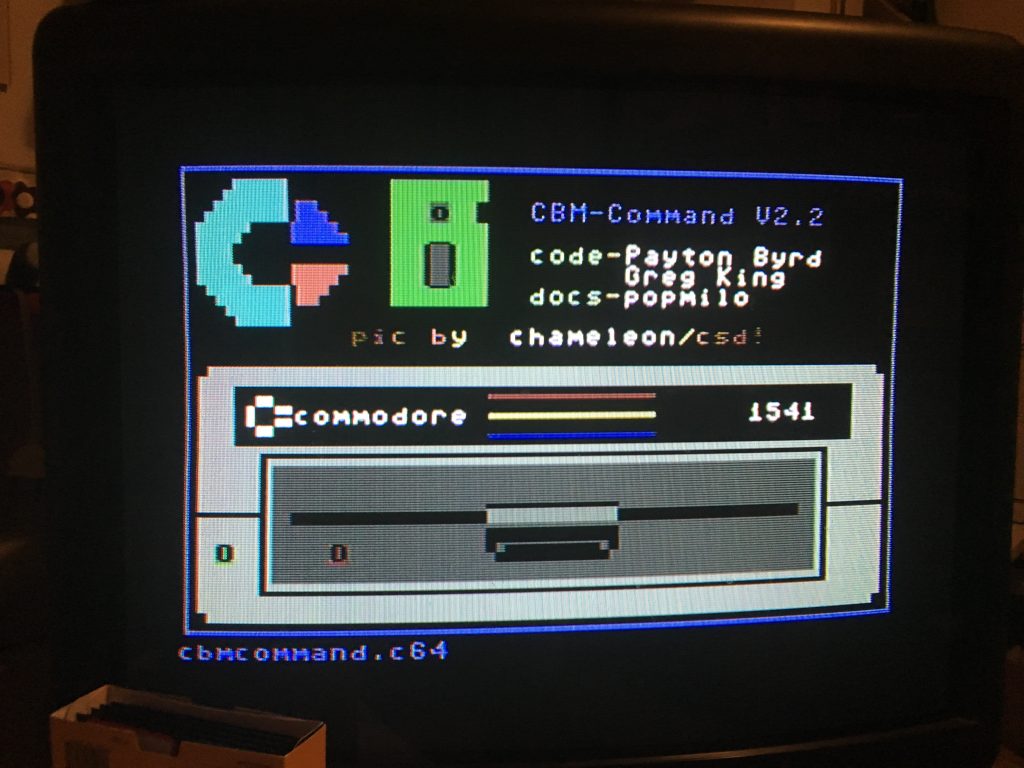 Anyway, I can now confirm that the uIEC/SD drive does indeed copy program files to and from another the internal disk drive using a disk utility program like CBM-COMMAND.  This tool enables you to copy files between disks, delete films, rename files, create disk images, copy entire disks, etc. It is pretty powerful. In the screenshot below I am using shift + D to select the drive I want to access. 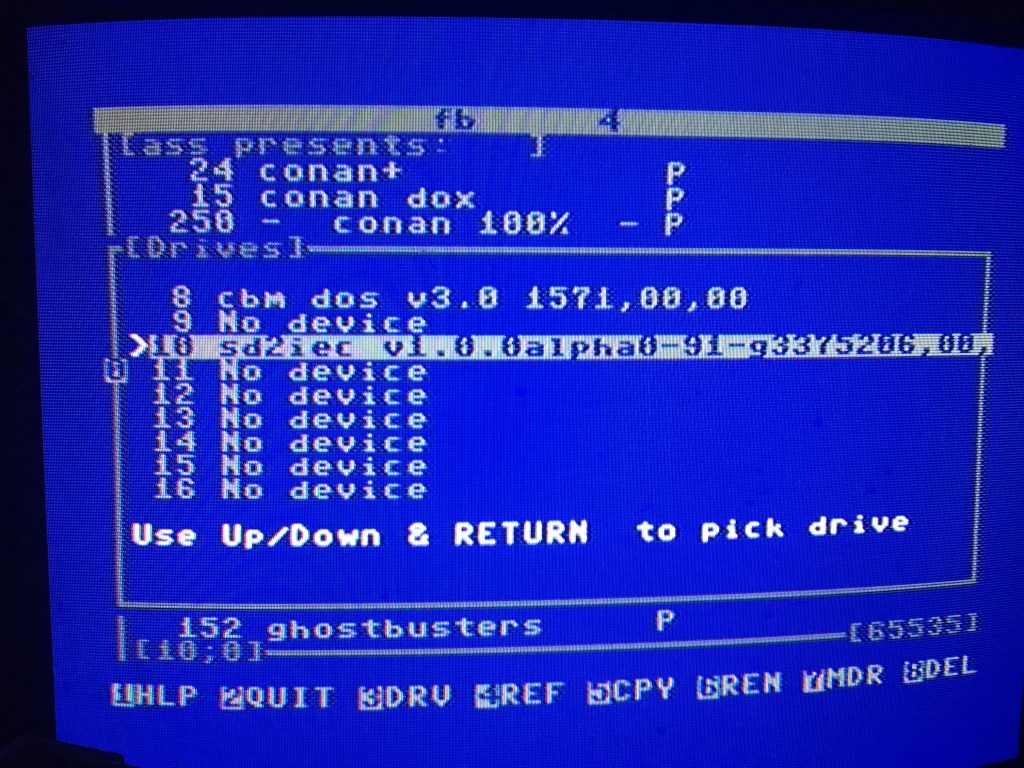 Here you can see drive 8 (internal 1571 disk drive) and the drive 10 (uIEC/SD), and by selecting various files with the spacebar you can then write them to a floppy disk by selecting F5. 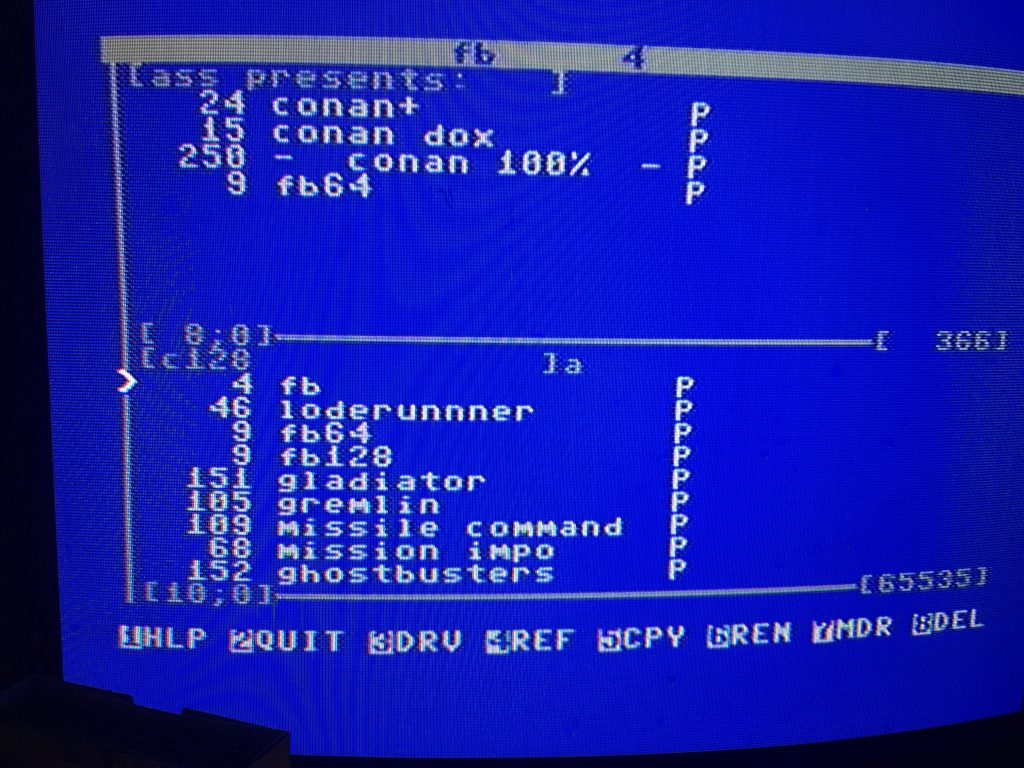 Below you get a now common warning dialogue box about deleting a file, you have to love this aesthetic! 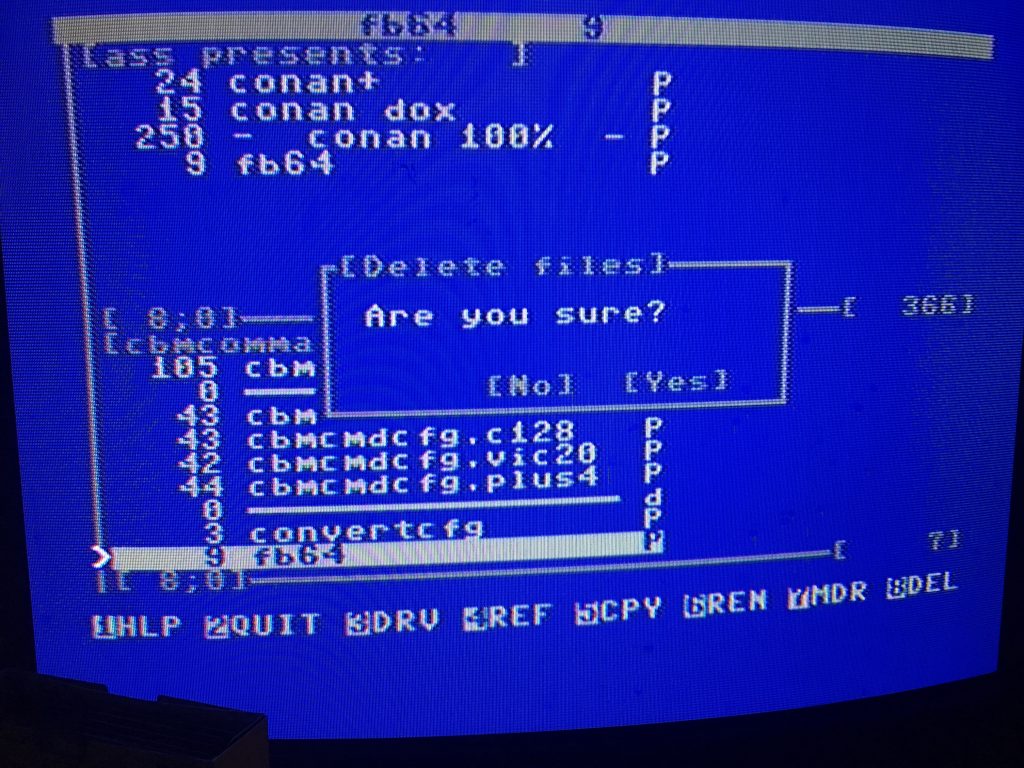 After this extensive playing with the uIEC/SD the last two days I have to say I am pretty sold on this hardware, and it has helped me understand the Commodore environment a lot better. My next goal is to start playing around with JiffyDos because I am hearing that helps speed things up a bit, which may not be a totally bad thing around here 🙂

* Some of you who are in the know may be asking yourself why the hell I bought both? The simple answer is I was hedging my bets in the event one of them didn’t do what I thought it would. Italy is a long way from South Dakota, and shipping costs are as much as both pieces of  hardware combined—so I decided to bite the bullet and get both. I figured I’ll probably be using at least one of them for some kind of installation over the next year, so it won’t be a total waste.