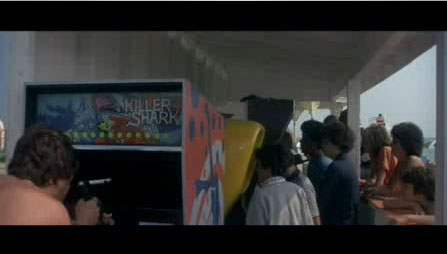 Jerry and I got to talking about classic arcade games yesterday (as we are wont to do along with 1980s music) and the 1972 electro-mechanical game Killer Shark came up as a topic of conversation. Killer Shark represents a brief moment before the imperial rise of the video game, yet the cabinet was fully representative of the aesthetic of video games to come. 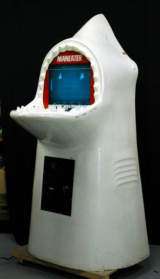 Although, in all fairness, not nearly as inspired as the surreal cabinet design of the first Shark video game Maneater -yet a hundred times the graphics and game play in my opinion. It’s always fun to indulge in a bit of gaming nostalgia, and I decided to take it a little further in order to find some more details and images, and lo and behold I hit pay dirt -so easy with the internets:

Killer Shark, Sega, 1972, shark moves around and the player shoots it with a spear gun. It has a series of slides on a wheel that make the shark move and thrash around when shot. Electronic sound and 8-track player. Same game as Sega’s Sea Devil, but Sea Devil had a manta ray instead of a shark. (Link)

The reference to Sea Devil above is relevant, because that is actually the game I played while growing up at the local arcade (and I literally did grow up there). My first exposure to Shark Attack came during a brief cinematic foreshadowing in Jaws (1975). I went back to the archive in order to give anyone who may not have remembered the fascinating aesthetic of this game -in many ways both haunting and gruesome. The shark moves lightening fast (not unlike the genetically engineered in Deep Blue Sea) through a series of flickering slides and when the harpoon hits, the blood flows freely as the shark writhes in pain. The images are pretty powerful, and thankfully the time machine of the movies preserves it all in beautiful Technicolor!

This entry was posted in fun, video games and tagged arcade games, gaming. Bookmark the permalink.