Paul Bond just alerted me that he saw the animated cover of a Famous Monsters of Filmland issue featuring some Ray Harryhausen magic on the sidebar of the Destination Nightmare blog. I am honored! 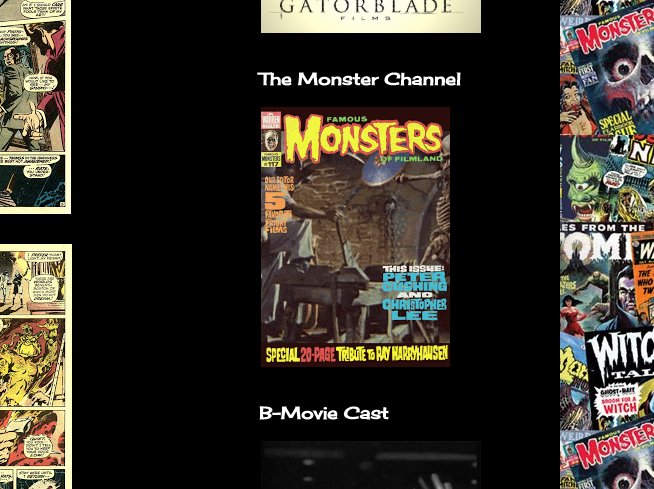 That little animation is hold up the Monster Channel link, and I could not be prouder! here is the animated GIF in all its glory.  Far from perfect, but definitely one I enjoyed making.

Now this is usually where some folks (ahem Cogdog) start getting upset about attribution, but frankly I really don’t care. I take freely from around the web and I sometimes don’t give credit where credit is due, and part of the reason is because the web feels a bit less serious when it is treated as a media free-for-all—which was how it was in the early to mid 90s when I cut my teeth on it. It’s hard for me to shake the sense that discussions around permissions and attribution is driven by the logic of media ownership, but I own very little of what I share on this blog. In fact, it’s the ownership idea of the new web that got my YouTube account deleted with countless takedown notices, and it’s why I have avoided licensing my work on this blog at all. I really don’t care who uses what I’ve written or created here, cause I never felt like it was mine as much as it was a reaction I was having or thing I was engaged in.  I understand the web is more serious now, and the stakes are higher, but then why not abandon the blog and use that fact as the perfect excuse to write a newsletter, or even a book? 🙂  If someone wants to freely take a mashup I did of media I remixed and re-used without permission, than who am I to take issue? I never did the ds106 assignments for credit beyond a comment or two saying “That’s awesome!” That was always enough.  In fact, I am more thrilled to have discovered this is still be found and used in 2019 than anything else, just another thing to make me long for the good old productive years.

This entry was posted in digital storytelling. Bookmark the permalink.